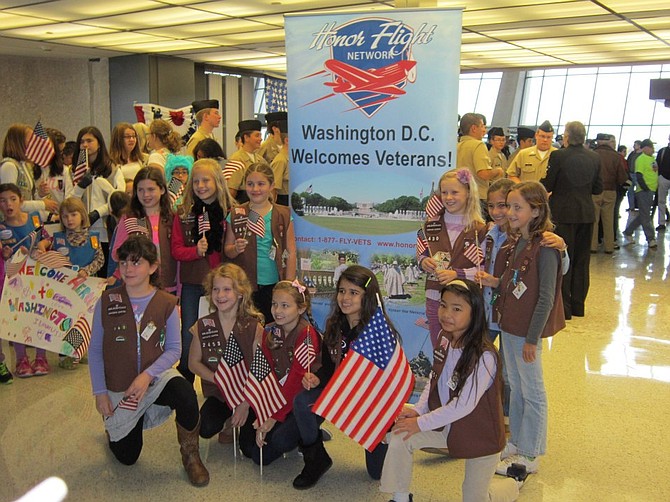 Members of Girls Scout Troop 3651 greeted an arriving Honor Flight at Dulles International Airport when they were Brownies in 2012. They are organizing a showing on “Honor Flight” on March 16 in Herndon to bring more veterans to Washington. Photo Contributed

Girl Scout Troop 3651 is sponsoring a special screening of the movie "Honor Flight" on March 16 at 5:30 p.m. at AMC Worldgate 9 theaters in Herndon. “Honor Flight” tells the story of a nationwide effort to fly World War II veterans to Washington, D.C. to visit the monuments built in their honor. For many veterans, this opportunity is the trip of a lifetime. This is a one-time showing, and tickets are $12.50, online in advance only. To buy tickets go to: https://www.tugg....

The Honor Flight Network transports aging veterans to visit memorials built in Washington D.C. in their honor. Caroline Healy and 11 of her peers in Girl Scout Troop 3651 based in Great Falls are hosting a screening of "Honor Flight" at AMC Worldgate 9 Theaters in Herndon on March 16 at 5:30 p.m.

It’s very important that the veterans who served in World War II will be remembered.”

“Honor Flight” follows a midwestern community racing against the clock to fly World War II veterans to Washington, said Karen Joostema, co-leader of the group. Tickets are being sold online in advance only at https://www.tugg.com/events/11973

The movie will be followed by a short discussion with veterans.

THE 12 GIRLS in Caroline’s Girl Scout Troop, who attend Colvin Run Elementary School in Vienna, first worked with the Honor Flight organization two years ago as Brownies. They greeted an Honor Flight of veterans at Washington Dulles International Airport here to see the memorials, according to Joostema, co-leader of the troop.

“We got to shake hands and hug them and sing songs to them. We sang ‘America, The Beautiful,’ ‘You’re a Grand Old Flag,’ and ‘God Bless America.’ They seemed very happy,” said Kyra Joostema, 11.

“They were telling us what it was like,” said Caroline.

“To see the girls interact with the veterans, it’s not something to be replicated,” said Caroline’s mother Amy Healy, co-leader of the troop.

Karen Joostema said the girls were inspired and wanted to learn more, so they arranged for the troop to view the movie.

When it was time for the girls to decide on a community project this year, they decided to try to help more veterans to get to Washington by setting up their own community viewing.

“We want people to have a chance to see it and understand what happened and to understand that people around us did a good thing,” said Caroline.

ABOUT 640 VETERANS who served in World War II die each day, according to Honor Flight Network.

“They are a very service-oriented group of people, especially for their age. They are getting more independent,” said Healy of the girls. “It’s just neat to be a part of it. The girls are taking more of the lead as they get older.”

The girls have made signs, visited nursing homes to tell people about the movie, and have brainstormed other ways to get people to go.

“I just hope we sell the tickets, so Karen and I don’t have to buy them all,” said Healy.

Caroline has been in her girl scouts troop for four years.

“We are there to support each other. We all do things together, not one of us is left out,” said Caroline.

“Our troop has worked so hard, it makes me happy that we accomplished this,” she said.