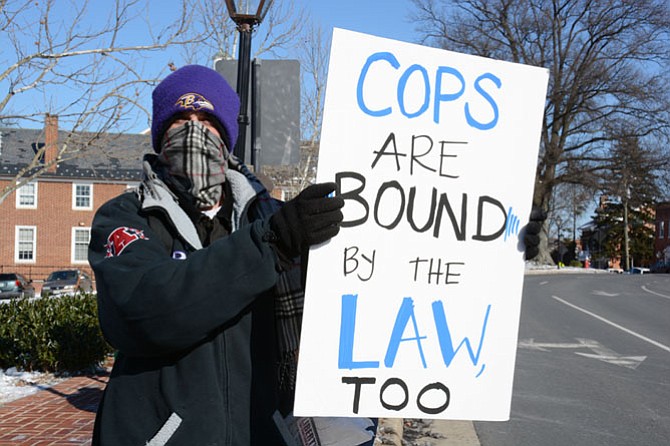 Jason McCormack of Centreville demonstrates for increased police accountability at a Jan. 8 protest in Fairfax. Photo by Tim Peterson.

Cars honked in acknowledgement as Centreville resident Jason McCormack stood alongside Chain Bridge Road in Fairfax, near the Fairfax County Courthouse, with a handmade sign that read “Cops Are Bound By The Law, Too.”

McCormack had joined several dozen protesters from around the state, braving freezing temperatures in the late morning on Jan. 8, demanding Fairfax County police answer for the shooting death of Springfield resident John Geer.

The protest was organized through a Facebook group called “Justice for John Geer” that at the time had nearly 700 members.

“I’m here for police accountability all across the board,” McCormack said, his head almost completely obscured by a Baltimore Ravens beanie and a grey and black scarf.

“I lived in the court across from the Geer’s house and it could’ve been my kids out playing when the shot was fired. It could’ve been a whole other story. We need to stop letting the gun be the first thing you pull.”

Following a domestic dispute with his longtime partner Maura Harrington, police had arrived at Geer’s home and spoke with him for over half an hour while he stood in his doorway, unarmed, with his hands raised and resting on the frame.

As he began to lower his hands, he was shot in the chest and died in his house without receiving medical attention.

Seth Chambers of Winchester (Left) “I’m here to make sure people are held accountable. Have the investigation be public. We demand answers.” Ewa Pinkowska of Woodbridge (Right) “There’s been a huge lack of of accountability, which is unacceptable. If what they did wasn’t wrong, there’s no reason to hide it.”

On the Monday before the demonstration, Fairfax County Board of Supervisors chairman Sharon Bulova came forward to release an explanation from the county for the first time in nearly 17 months since the Aug. 29, 2013 shooting.

Bulova’s statement came with a brief official account from the county of the events surrounding the shooting, that named the officer involved as PFC Adam Torres.

“I have been frustrated and disappointed with how long this investigation has taken,” she said, citing the case’s changing hands from the Commonwealth Attorney to the Department of Justice as a reason for the delay in information being released.

Protest organizer Mike Curtis of Manassas urged demonstrators and the public to demand more explanation from their public leaders.

“Don't just let her have her few minutes on the news and tell everybody she's for the same thing you are,” he said. “She needs to be held accountable too.”

Curtis is also one of the founders of the Justice for John Geer Facebook group.

He was joined in addressing the media and demonstrators by Richmond resident Nathan Cox, who founded the public interest Virginia Cop Block that seeks police accountability and transparency.

“This is the first step in what we're trying to do,” he said. “We need to keep going, keep thinking this isn't the end, it's just the beginning.”