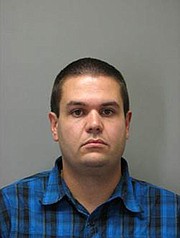 Adam Torres has been charged with murdering John Geer. Though Torres shot the unarmed man once in the chest nearly two years ago, the then-Fairfax County Police officer remained on the department’s payroll until being terminated July 31, 2015.

Commonwealth Attorney Raymond Morrogh had convened a special grand jury to hear testimony from officers and other witnesses to determine whether Torres had committed any criminal wrongdoing. It first met for a week beginning July 27 and resumed on Aug. 17. The indictment of second-degree murder was announced later in the day Aug. 17.

Roessler opened by sharing that he had reached out to the Geer family to again offer them “my personal condolences and sympathy.” But he didn’t stop there. “To the men and women of Fairfax County Police Department and our great community, my heartfelt sympathy to everybody, because the loss of life in this case impacts the Geer family and all of us.”

TORRES was in the process of surrendering himself and being processed at the Fairfax County Adult Detention Center while the press conference was taking place. He’s currently being held without bond, a police report said. An arraignment hearing was scheduled for 10 a.m. on Wednesday morning, Aug. 19, where a judge may or may not set a trial date, Commonwealth’s Attorney Raymond F Morrogh said in an email.

On Aug. 29, 2013, Geer had been standing in the doorway of his Springfield home for around 40 minutes, talking with officers who had their guns trained on his chest. Geer’s longtime partner Maura Harrington called the police earlier because Geer had been throwing her belongings out of the house after she previously told him she was planning to move out of the residence and he became upset.

In police reports of the incident, Torres claimed to see Geer quickly lower his arms, presenting a perceived threat. The other officers present provided contradicting accounts, that Geer’s movements were slower and nonthreatening. Torres fired once, striking Geer in the chest.

Roessler said he decided to terminate Torres because after reviewing the incident investigation, “the use of force was not reasonably necessary in this matter” and violated police general order 540.1.

Despite the tragedy of the incident itself, Geer’s case drew public and media attention because it highlighted a perceived lack of transparency and accountability in the way Fairfax County and the police department handled communication and other policies such as use of force.

One response to the criticism was Board of Supervisors chairman Sharon Bulova’s creation of an ad hoc commission to review police policies.

“Fairfax County has learned a lot through this very difficult process,” Bulova said at the press conference, “learned a lot about sharing information in a timely way.”

Though Geer was killed Aug. 29, 2013, very little information about the case was made public, much less released to Geer’s family following the incident. Ongoing investigations by the police department, Commonwealth Attorney’s Office and Department of Justice were cited as reasons why information such as the name of the officer who shot Geer was withheld for a year and a half.

Geer’s family finally filed a $12 million civil suit against the county, including the request for information. Fairfax County settled out of court, paying nearly $3 million, and released over 11,000 pages of documents from the incident investigation.

“This is the first time we've had a situation like this where there has not been a relatively fast resolution to a police-involved shooting,” Bulova said. The chairman referred to the situation as a “convoluted” one that “held things up in a way that frustrated the Board of Supervisors. We were not happy that things ended up not moving forward to resolution, that instead it wound up at the federal level.”

THE AD HOC COMMISSION is scheduled to present its final recommendations to the Board of Supervisors in October, however Bulova and Roessler said the county hasn’t waited to begin already implementing some of the suggestions that have already been put forward by the commission.

“I have every confidence a scenario like this won't happen again,” Bulova said.

Many others are hopeful for that as well.

“Nothing you can do is going to justify his death,” said Jeff Stewart, Geer’s friend who witnessed the shooting and also serves on the ad hoc commission. “The only thing I can hope is through this commission, and other things, it vindicates his life. I think he’d be proud of that — we keep these things from happening in the future.”

Stewart said after he heard about the indictment, he had “mixed emotions.” “It’s certainly a big weight, felt like a weight had been lifted, but it’s hard to get past the fact [Torres] has two kids of his own. His family didn’t sign on for this either. It’s tragic.”

With regards to closure, Stewart said, “I think we’re there already.

“The grand jury heard the evidence and got it right. I trust when it goes to trial, they’ll get it right as well. I’ve trusted the system up to now — I’ve said, if he was indicted, I would trust the system to make the right decision.”

And while Torres received the indictment, “more went wrong here than just Torres pulling the trigger,” Stewart said. “You should have supervisors in front of you, answering for why an officer was there, violating procedures, and no one was doing anything about it.”

“While he did kill someone, we can’t really blame him for everything after that,” said Mike Curtis of Northern Virginia Cop Block and founder of the Facebook group Justice for John Geer, which has staged numerous protests since the fall. “He can’t decide to charge himself with the crime, he can’t prosecute himself.

“You can’t blame him for the stonewalling,” Curtis continued. “That’s one thing I’m worried about now. We’ve gotten the one step done, but hardest thing is holding Bulova, Roessler, (County Attorney) David Bobzien accountable. There needs to be some opposition to people who’ve been on the Board of Supervisors for years. They’re the ones who make these employment choices. These patterns keep repeating.

“Unfortunately, it’s not an issue to most people,” Curtis said.