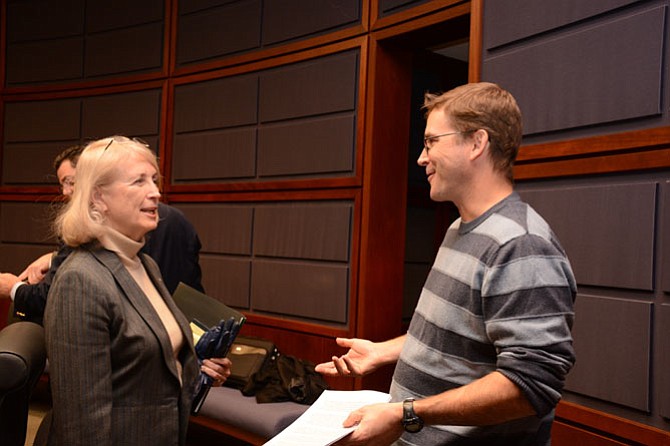 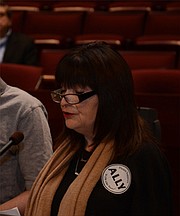 Sharon Cummings of Fairfax: “I’m here supporting SB 957, closing a loophole regarding autism. Early intervention is responsible for much of my son Connor’s success today. Education for parents is needed to help them understand their children.” 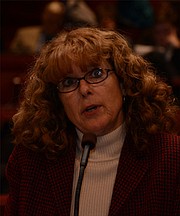 Grace Reef of Burke: “I’m here with Child Care Aware of Virginia. Our top priority is that children not die in child care. Safety is an issue with providers that can be unlicensed until they have over six unrelated children.” 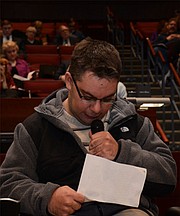 Justin Dolan of Falls Church: “I’m 34 years old and I have cerebral palsy. I’m one of the people lucky enough to have a DD (Individual & Family Developmental Disabilities Support) Waiver to provide me some of the services I need. I’m here to ask to reduce the waiting lists so people with disabilities aren’t trying to make do with nothing.” 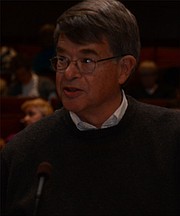 Jack Bruggeman of Vienna: “I’m representing the Parents and Associates of the Northern Virginia Training Center and advocating for delaying the closure of the center.”

Justin Dolan addressed the state delegates and senators from his wheelchair rather than the podium. The 34-year-old Falls Church resident has cerebral palsy, and received an Individual & Family Developmental Disabilities Support waiver.

“I can use my waiver to fund a staff person to help me with my daily care needs, when I can find someone who wants to work for $11.47 an hour with no benefits,” Dolan said. “The thing I really need is enough support for me to move out of my mom’s house and live in the community with friends, but the waiver doesn’t provide that.”

Dolan asked for a reduction of the waiver wait list, a redesign of the waiver system itself to offer increased services. He was one of over 70 speakers given an opportunity to address a panel of delegates and senators about to travel to Richmond to begin the 2015 General Assembly session.

Chairman of the Board of Supervisors Sharon Bulova was first to speak, speaking primarily on the importance of funding K-12 education in Fairfax County.

“We’re pleased both the General Assembly and Governor McAuliffe were able to protect K-12 from recent funding cuts,” she said. “In the longer term, we still need your help.”

Bulova cited the more than 52,000 students in FCPS that qualify for free and reduced lunch, a figure she said outnumbers the total population of all but four school divisions in the state.

“I urge you to work on the SOL, reducing the impact of that assessment on students,” she said.

Over 70 members of the public were each given three minutes to address the delegation. Though the subject matter varied from social services for mental illness and substance abuse disorders to filling circuit court judge vacancies, one common theme was the lack of resources, people trying to do more with less.

Several individuals spoke out about the closure of the Northern Virginia Training Center (NVTR), a state residence serving people with intellectual disabilities. Opened in 1973 at 9901 Braddock Road, the Department of Behavioral Health and Developmental Disabilities plans to close the NVTR in March 2016 in favor of a more community-based system.

“The quality of life has been been compromised by degrading services,” said Judith Korf of Reston. Korf was at the forum representing the Parents and Associates of the Northern Virginia Training Center. “We need to keep it open in a smaller and more effective footprint.”

Jonathan Damm of Reston used his three minutes to raise the issue of toxic turf fields at FCPS schools. His main concern was children being exposed to chemicals on ground-up tire rubber used to make the fields. “We need to ban the use of crumb rubber,” he said. “There are alternative materials that could be used, but they’re more expensive.”