Oakton students to perform in “Signature in the Schools 20th Anniversary Festival.” 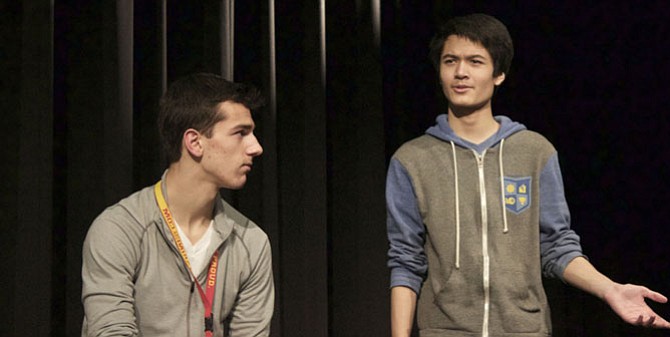 "We are so proud to be part of the ‘Signature in the Schools 20th Anniversary Festival,’” said Vanessa L. Gelinas, Oakton High School Theater Arts teacher. "It is a tremendous opportunity for the students to perform and learn."

Over the past 20 years, Arlington's Signature Theatre has produced original theater works that are "powerful and relevant pieces" said David Zobell, Signature's Director of Education. "Signature in the Schools" has explored war, immigration, cyber-bullying, the aftermath of Hurricane Katrina, the Holocaust and more. This year's festival highlights four pieces performed over two weekends by students from around the Washington, D.C.-metropolitan area.

Oakton students will perform "Image is Everything" by Joe Calarco. The play focuses on themes of propaganda, conformity and personal responsibility. It takes place in the present day as a group of students study the Holocaust and learn that propaganda and misinformation is still around, even in their very own school.

“Signature in the Schools is one of the most unique and exciting education programs in this country,” said Joe Calarco, Signature’s Resident Director of New Works.

The 13-member Oakton cast includes two student directors. The students have spent the past weeks in class, after school, and even during their winter break, learning their lines. Now they are in the final weeks of rehearsals, Gelinas said. "The play shows that propaganda can be glamorized and used to hurt others. In this time of social media's fast communications, it is important to learn what is fact and what is fiction."

“The first thought I had after finishing a read through of the ‘Image is Everything’ script was, ‘Wow, this play is so powerful,’” said student director Hanna El-Mohandess. "As a part of a minority in my own school, not only was I affected and taken aback by the reality of the play’s message, but I was also able to relate to almost all of the characters in the play."

The play conveys "the confusion that comes with being a part of a minority. Sometimes, it becomes too easy to camouflage into your surroundings, and lose your voice in the process...The play is so powerful and has such a poignant message."