A 700-year-old Legacy Comes to Vienna 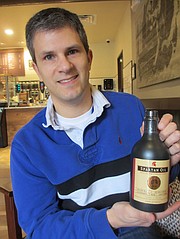 Pericles “Perry” Konstas of Vienna harvests olives from his family’s 700-year-old olive trees near Sparta, Greece, and bottles extra-virgin olive oil in Vienna for sale throughout the region and country.

A Vienna man has lassoed his dream, bringing to Vienna – and the U.S. – the legacy of 11 ancestral generations of Greek men and women --- olive oil extracted from Spartan olive trees 700 years old. Pericles “Perry” Konstas left a career as a CEO in 2014 to produce and export olive oil made from his family’s olive groves outside Sparta, Greece. Spartan Oil bottled its first product in October 2014, and, through “tastings” and social media promotion, demand for Spartan Oil has been steadily increasing.

“It became clear to me that once people tried it, they wanted to buy it.”

THE OLIVE TREES, several thousands of them, are owned by “a lot of family,” Konstas said. Under their watchful eyes, olives are harvested from ancient trees and pressed within 24 hours of harvest.

About four or five years ago, Konstas started sampling and comparing olive oil from all over the world to his family oil. He always “knew” he wanted to start a business of his own some day, something he was truly passionate about. He said he had a true epiphany about three years ago when he ordered and tasted a gold-medal award-winning olive oil from California. Konstas set it out for tasting with friends. “I couldn’t eat it. It was harsh, bitter-tasting,” he said, too “peppery.” It got to the point, he said, where friends were encouraging Konstas to bottle his own family olive oil. Spartan Oil was born from his tastings.

Tasting olive oil has a less defined protocol than wine does. To taste, Konstas said he sips a bit or dabs a rustic bread in it, definitely “not sourdough,” though. “We use olive oil on everything at home,” said Konstas. “Greeks consume more olive oil per capita than any other people in the world.”

SPARTAN OIL differs from most commercial brands – even “high-end” ones – in a few regards. The oil is harvested from trees 700 years old, and pressed within 24 hours of harvest. It is honestly extra-virgin, raw, and unfiltered. Konstas refers to his brand as “bold,” but not bitter nor too peppery. He calls it “smooth.”

Even the bottle it is sold in is bespoke, a 500 ML stoneware vessel imported from Germany. Stoneware is thicker and more protective of the unadulterated oil than is glass or ceramic, and was used by the Greeks throughout the centuries. Spartan Oil sells a refill pouch at a lower price than the stoneware bottle.

The olive seedlings are planted when they are about one meter high. It takes, at least, 10 to 15 years before a tree produces a commercially-viable product. Konstas goes to Greece and packs the oil for shipping to Vienna by boat.

Maple Avenue Market was the first retailer to stock Spartan Oil when it was initially released in mid-October. Konstas has done tastings there and at other shops around the area. When he presented samples at a fall D.C. cooking show, Konstas sold 150 bottles in two days, calling it a “great response.”

KONSTAS GREW UP primarily in Vienna. He went through Vienna schools and graduated from George Mason University in 2000. Konstas married in 2004 and the couple has two children, a daughter almost 6 years old, and a son, age 4. In 2014, Konstas and his wife were looking to buy a home and they narrowed their choices to Vienna and McLean.

“Ultimately, the decision came down to all the family events in Vienna. To me, it [Vienna] always felt like home. When my wife started to feel like Vienna was home, that was it for me.”

Spartan Oil sells for $22 for a 500-ml stoneware bottle, the middle range for a high-end product, and is available online and at select local shops, including Maple Avenue Market. Konstas offers free local delivery for orders in Northern Virginia.

To learn more about Spartan Oil and to order it online, go to www.spartan-oil.com. Konstas’ tasting schedule is updated there and on the company Facebook page, www.facebook.com/SpartanOil. Contact Perry Konstas at pk@spartan-oil.com or by phone at 703-408-5815.