From the rolling countryside of Umbria to the neighborhoods of Vienna, local oral surgeon brings the best of the best to local tables. 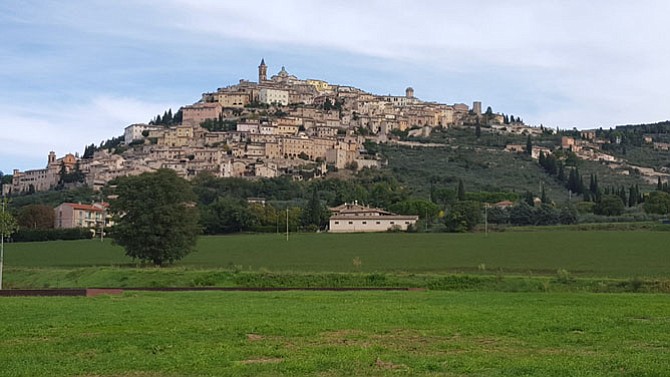 Trevi, Umbria, Italy, is Italy’s olive oil capital, and the area in which Nonnie Importers gets its olives. Bonacci and his wife Kristin are hands-on in October and November when the olives are harvested. Photo courtesy of Nonnie Importers 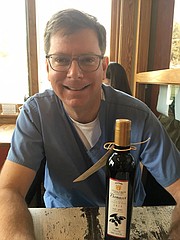 Oral surgeon Christopher Bonacci, whose practice has been in Vienna for more than 15 years, has taken his passion for fresh, natural food in a new direction. Bonacci, through his new business, has begun importing olive oil from Italy’s olive oil capital, Trevi, in Umbria.

What do you call Washingtonian Magazine’s “Top Oral and Maxillofacial Surgeon” living out his alter-ego dream in a parallel universe --- overseeing production of 100 percent pure Italian olive oil and importing the finished product to the U.S? If you are in the Vienna-Oakton-McLean area, you might call him Dr. Bonacci, Christopher Bonacci, armed with both medical and dental surgery degrees, and a passion for the best of living Italy offers.

“I’m trying to get people to understand that olive oil is not all the same,” Bonacci said, noting that only about 20 percent of purported Italian olive oils are made from Italian olives only. “The olives take on the nuances of nature, of the growing season, of picking the olives and bottling the oil the same day the olives are picked.” If you are paying less than $25 for a bottle, it’s unlikely to be authentic Italian olive oil. “It can’t be produced, bottled, and shipped for under $25 a bottle.”

Cheaper olive oil calling itself Italian is shipped by tankers to Italy from lower-cost nations for processing.

In October 2015, while visiting several of the most renowned olive groves and mills in Umbria, Bonacci and his wife Kristin personally chose Olio Metelli to produce the 2015 Bonacci extra-virgin olive oil. The Metelli family owns approximately 15,000 olive trees in the foothills between Foligno and Trevi – Italy’s olive oil capital - in Umbria. Light, age, temperature and soil all affect an olive’s growth.

“These craftsmen have produced culinary treasures passed down from generation to generation,” said Bonacci. “It is truly a family business, where every Metelli takes responsibility for an aspect.”

OLIVES are picked in the late fall. Metelli handpicks and presses only in the middle of October through the end of November. To maintain maximum health and flavor benefits of olive oil, the olives should be picked, pressed and bottled on the same day. Bonacci is enthusiastic as he shows the label on his bottles of extra virgin olive oil: the lot number indicates the olives were picked, pressed and bottled on Nov. 19, 2015. “Nuovo” Italian olive oil is very rarely exported to the U.S. because the locals consume it as soon as it is produced. Bonacci’s debut batch of 500 bottles – that were processed, packed and delivered in less than a week – disappeared almost immediately. Bazin’s on Church bought a case for restaurant specialty use. Nonnie Importers, the Bonacci business name, will take orders for the 2016 production that Bonacci will oversee.

When an attorney friend from Montefalco, Umbria visited the Bonaccis in McLean, they talked about Italy’s unstable economy that exists under some of the world’s greatest culinary resources.

Inspiration came from several places. Bonacci said he felt he had to start thinking ahead to retirement in a decade or so from now. He owned and operated his namesake oral and maxillofacial surgery offices for more than 20 years. Last year, his associate Dr. Kim joined him as a full partner in the surgery/implant center. With one child in college and another not far behind, translating the Bonaccis’ dreams into an economically-viable epicurean business began in earnest this fall.

Last winter, Bonacci and his wife Kristin sat down and asked one another, “what do we love to do?”

“We love to eat, to travel, go on food adventures, to drink good-quality wine,” Bonacci said. “We look for restaurants featuring ingredients from small local farms, knowing where our food comes from.”

Bonacci’s father comes from Umbria, the “green heart” of Italy, a region that borders Tuscany and is known for its olive groves, wine grapes, black truffles and iconic pork products. From these rich rolling hills and farms comes a wealth of foods and wines revered for their high quality. Christopher and Kristen Bonacci turned to Umbria as the bed of their business in fall of 2015.

“I had this moment of clarity,” said Bonacci. “Maybe, we should think about importing some Umbrian products. I know the people. I have roots there. Now, how do we go about doing this?”

“A lot” of motivation came from friends, from the attorney in Umbria to a radiologist living in upstate New York --- who recommended a food and beverage attorney who just happens to live in Oakton. A dinner at Bazin’s in August of 2015 joined by Bonacci, the Oakton attorney and the radiologist culminated in Nonnie Importers, formed in September. The name pays homage to Bonacci’s grandmother. “It seemed like the best way to remember her,” he said. 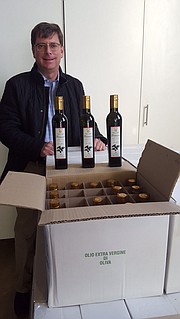 “All of these roads collided over a bottle of Sagrantino Montefalco,” Bonacci said.

While Bonacci’s vision is to bring the finest wines, black truffles, vinegars, sausages, and pottery from Umbria to the Washington, D.C. area and beyond, for now, Christopher and Kristin Bonacci are satisfied bringing the highest-grade, purest olive oil to the region. He looks to hosting a culinary/experiential tour around Umbria someday not far away. A cousin to pioneer farm-to-table chef Alice Waters, Bonacci said that cooking fresh, seasonal food is in his DNA.

“Farm-to-table products and meals are on the rise. People are asking, ‘who made this? What’s in it? Where does it come from?’ I want them to be aware of where their foods come from.”

Dr. Bonacci opened his practice in Vienna in 1999 and lived in the town until a few years ago when the family – Kristin and two children – moved to McLean.

Bonacci said he wanted to show his children that you can still dream, and, with hard work and determination, you can create something special,. “This is about the power of the individual, we’re making our dream come true,” Bonacci said. “Doing what I love, a passion of the heart here.”

TO LEARN MORE about “Bonacci” Umbrian extra-virgin olive oil and what lies ahead for Nonnie Importers, go to https://www.facebook.com/nonnieimporters/?fref=ts.