‘We Appreciate Our First Responders’
Votes

‘We Appreciate Our First Responders’ 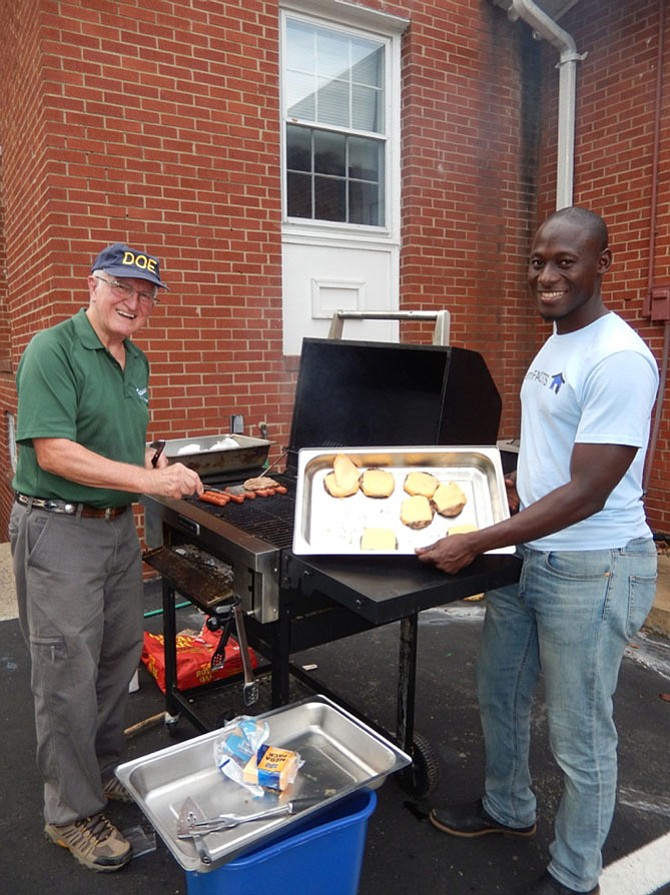 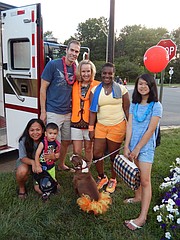 Usually, when firefighters or police officers respond to a neighborhood, it’s because something bad has happened and their help is needed. But that wasn’t the case, last Tuesday, Aug. 1.

That’s when communities throughout Centreville, Chantilly, Fair Oaks and Fair Lakes joined with neighborhoods across the U.S. to honor their public-safety providers during National Night Out. Residents planned a variety of events, such as pool parties, cookouts and ice-cream socials and invited first-responders to join in the fun — which they did.

In the Ragan Oaks community of Fair Oaks, the celebration was held at Centerpointe Church. Among the guests were police officers from the Fair Oaks District Station, including the station’s new commander, Capt. Chantel Cochrane, and assistant commander, Lt. James Krause.

“This is a great event because it’s a fantastic opportunity for us to meet with community members in a social setting hosted by the communities,” said Krause. “It’s all about relationship-building.”

Officer G. Howell has attended this event before, but it was his first time doing so at Ragan Oaks. “Kids really enjoy having us out, and the community looks at us as a valuable asset,” he said. “And by our showing our faces in the community, we help provide more trust between ourselves and the residents.”

Outside, church member Henry Weigel was grilling hot dogs and hamburgers with help from Tijani Musa, who runs the FACETS program there. Inside, children and police played games and the officers answered the children’s questions.

There, too, was Chantilly High senior Anna Dolen, who also attends church at Centerpointe and is in the criminal justice program at the Chantilly Academy. “This is really cool because I work at Mission BBQ in the Greenbriar Shopping Center, and the police and firefighters come there to eat and talk with us, so I already have a connection with them,” she said. “And in the winter, our congregation gives the [Ragan Oaks] kids Christmas gifts. So National Night Out is another way of getting to know the kids better.”

People were also having fun outside the James McDonnell Community Center in Centreville’s Virginia Run community. Neighbors chatted with each other while children played on a moonbounce and on the playground equipment. They also enjoyed free scoops of chocolate and vanilla ice cream from Peterson’s Ice Cream Depot in Clifton while meeting police from the Sully District Station.

Resident Mary Moon — who’s with Fairfax County’s Community Emergency Response Team (CERT) — also had a table there, where she and CERT representative Brian Aiello talked to attendees about the program. “CERT is a community program that trains people to know how to respond safely in an emergency — what to do and what not to do,” she said.

It’s critical, said Moon, because in emergency situations, “You want your neighbor trained in, for example, how to stop bleeding. Or what to do if there’s a big storm, a tree comes through your roof and 911’s not working. And the program is for average citizens — you don’t have to be musclebound.”

As for National Night Out, Moon said it’s important because “You take back the night and show your support of your neighbors and the first responders.” Virginia Run’s event organizer Ryan Coughlin estimated some 75-80 people participated, as well as McGruff the Crime Dog with the county police.

“It’s a way to get out, meet your neighbors and have a good time,” said Coughlin. “With our busy lives, we’re just trying to have some family-friendly fun. And this also lets everyone meet people they haven’t met before.”

Lynn Chiapponi said this event “brings the community together. I like to meet our homeowners’ association representatives and acknowledge the police and fire departments, too. And I love the fact that it’s about safety — keeping our kids in the community safe.”

A 13-year Virginia Run resident, Julie Gary said what she likes about her neighborhood is that “It’s full of families actively involved with their kids. And National Night Out is about people coming out to meet their neighbors and supporting our firefighters and police.”

One of the largest National Night Out celebrations in the area is the one held annually at the Sully Station II Community Center in Centreville. “Tons of people are here,” said Dan Jenuleson, who organized the event with his wife Leslie. “Some 500-600 people came — it’s one of our biggest turnouts ever.”

“Today is my husband’s and my 13th anniversary – and what better way to celebrate than by serving the community?” asked Kayla’s mom, Jamie Gadley. “Kayla said she had a commitment to do this, so she wanted to come. We appreciate our first responders and their support of our community, and participating in it teaches Kayla to serve others.”

Besides that, added Kayla, “It’s a great way to meet everyone in the community all together.”

Colette Cipollini has lived in Sully Station II for 16 years and is happy to be there. “The neighborhood is really beautiful and the neighbors are friendly, and events like this bring the community together,” she said. “People you don’t necessarily see on your street, you see here. You meet new people and find out about neighborhood concerns. And there are always ongoing events and activities — we even have a lost-pet network.”

Regarding National Night Out, she said, “It’s nice to meet the police and firefighters one-on-one at events like this that are social. It puts faces to them and facilitates better community relationships.”

Justin Boudville is also a longtime Sully II resident, having moved there in 2000. “Everyone knows one another in our neighborhood,” he said. “It’s safe and it’s a great place to raise a family. And National Night Out lets us network with our neighbors [on other streets] and turn strangers into friends.”

“And we love the fire department — it’s so responsive,” he continued. “We’re lucky to have such professional first-responders available to us. The police are professional, too, and we appreciate them keeping our community safe. We’re very proud of both our firefighters and police officers.”