Kara Moore recalls the benefits of golf during her time at Westfield. 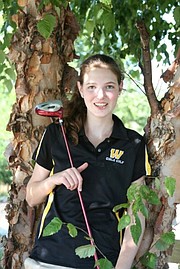 Kara Moore, pictured in 2009, has fond memories of her time with the Westfield girls’ golf team.

High school was a difficult time for Kara Moore. Whether it was medical issues or problems fitting in socially, Moore was plagued by stress for much of her four years at Westfield.

She was diagnosed with a panic disorder at the age of 10. As she got older, she experienced seemingly random illnesses. She underwent 12 surgeries in high school. She would eventually be diagnosed with Ehlers-Danlos Syndrome: Hypermobility and Postural Orthostatic Tachycardia Syndrome after collapsing during a college basketball practice.

While much of high school was hard on Moore, the golf course was her sanctuary. In 2007, she was the only freshman to make the girls’ golf team. Moore ended up a four-time regional qualifier for the Bulldogs, but golf at Westfield was about more than birdies and pars for the shy, slender girl who stood 6 feet tall. Golf gave Moore a place to get away from the stress of everyday life.

Moore’s teammates were also her friends.

“It was light-hearted,” she said. “... They were really accepting. ... That was something I was searching for since I wasn’t good socially. When I did get sick, they were the ones to check in on me.”

Moore, now 22, graduated from Westfield in 2011 and attended Marymount University in Arlington. At the time, Marymount offered men’s golf but did not have a women’s team. After joining the men’s team for one season, Moore helped create a women’s program.

“With the help and support of President Dr. Matthew Shank and the Washington Golf & Country Club community, I spent Summer 2014 creating the team I promised,” Moore wrote in an email. “The true test was practice in August 2014. We needed at least six players to be a team and 11 showed up ready to play.

“Marymount Women's Golf played its inaugural season in 2014-2015. None of the schools in our conference had golf teams so we played anyone and everyone who would play us. I traveled up and down the mid-Atlantic coast with my team having the time of my life. We were not first-place winners every match, but the creation of the team was a championship of its own.”

While golfing was the most enjoyable activity of Moore’s high school experience, interest in the sport dwindled at after she graduated. Golf is now a co-ed sport at Westfield, and Moore is focused on trying to bring back a girls’ team.

For a girls’ team to exist, Westfield would need at least four golfers — a number Moore doesn’t see as a problem. A low interest level and financial restraints make it unlikely for Westfield to field a girls’ team this fall, but Moore said she’s dedicated to making it happen in the future, and would like to help as a volunteer assistant coach.

“I would tell [any interested girls] that they don’t need to have swung a golf club in their life as long as they’re interested in playing,” said Moore, who volunteers with The First Tee of Greater Washington, D.C. “I was not confident in myself at all going into high school. I didn’t think I was going to make the team, at all.”

Moore said those girls interested in playing golf should come to tryouts for the Westfield co­ed team on Aug. 3 and 4 at Chantilly National Country Club.

“It may take a year, it may take two years to separate the [the boys’ and girls’ teams],” Moore said. “... I would like to see girls’ varsity golf with its own tab on the [Westfield athletics] Web site again.”

Moore has experienced additional hardships of late after graduating from Marymount with a bachelor’s degree, including job­related struggles and graduate school rejections. She’s currently back home in Centreville working in the golf department at Dick’s Sporting Goods.

While times can be tough, Moore can still focus on golf.

“I owe it to [girls interested in golf] to try and get this back up and running because it meant so much to me and I feel it might change the life of somebody else,” Moore said. “I would love to be around Westfield girls’ golf again.”