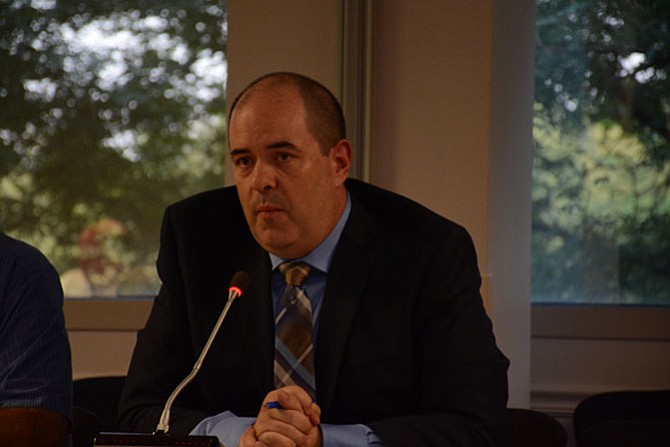 Christian Klossner, deputy director of the Washington, D.C. Office of Public Complaints and at-large member of the National Association for Civilian Oversight of Law Enforcement board of directors, was the guest speaker at the July 27 meeting of the ad hoc commission to review Fairfax County Police policies. Photo by Tim Peterson.

“It is well past time for the Fairfax County Police Department to start providing timely, honest and effective communications with everything it does.”

Cammarata wondered aloud at the commission’s July 27 meeting if the police members of the subcommittee had read the report themselves. He said if they agreed that the department had been “dishonest” in its past communication, “We’ve got a real problem. Whoever was giving dishonest communication, those people should be fired.”

Some heated exchanges among commissioners followed, including over the fact that the word “dishonest” wasn’t technically used.

Fitzgerald, chair of the Communications subcommittee, answered that the report “reflects the views of the subcommittee.”

“We’re not here to assign blame,” said Michael Hershman, chairman of the commission. “That was never the intention.”

Fairfax County Chief of Police Edwin Roessler reminded members of the community and ad hoc commissioners that he now has a personal scorecard through the Fairfax County website for citizens to rate his performance.

“Communications in recent high-profile use-of-force and critical incident cases were mishandled, inadequate and untimely, leading to loss of public trust and questions about the legitimacy of police actions,” the report said. The most recent incident was the Aug. 29, 2013 shooting death of John Geer standing unarmed in the doorway of his Springfield home.

It continued: “The failures in both communications and its Freedom of Information Act policies have created this crisis of confidence for the Fairfax County Police Department. If the department had policies that fostered real transparency, it’s unlikely the controversies in recent years would have lasted so long and there likely would not have even been a call to form this Commission.”

“It is strongly worded,” said Board of Supervisors chairman Sharon Bulova. “We suffered from a lack of candor, that enraged a segment of the community. Not just in the Geer case, but that really brought it to a head.”

Commissioner and Lt. Col. Tom Ryan with the Fairfax County Police department said, “The words don’t hurt us. We recognize the need to get better at release of information.”

“It isn’t easy to have your profession laid open,” Ryan continued, “we welcome that. We want to hear where we’re failing.”

The subcommittee’s recommendations fell under the categories of Maximum Disclosure, Minimum Delay; Community Engagement; Policies, Procedures and Personnel; Freedom of Information Act; Culture of Transparency and Moving Forward. It also proposed future regular review dates for the Board of Supervisors to the recommendations and implementation of input from the commission.

Shirley Ginwright, chairman of the Communities of Trust Committee, president of the Fairfax County NAACP and chairman of the commission subcommittee on diversity, recruitment and vetting of police officers, also shared that group’s final report and recommendations.

Ginwright said that subcommittee appreciated the chief of police’s existing diversity council that “is paying off,” but thought the department could do more outreach into community forums. The subcommittee, among its recommendations, called for a “diversity goal” for each district commander that would make them independently responsible “for enhancing diversity within the department.”

Once each subcommittee has filed a final report, the commission will assemble a comprehensive final report and recommendations to submit to the Board of Supervisors later in the fall.

Christian Klossner, deputy director of the Washington, D.C. Office of Public Complaints and at-large member of the National Association for Civilian Oversight of Law Enforcement board of directors, was the guest speaker that presented first at the meeting.

“Things are moving away from reactive models,” Klossner said during his presentation, “moving towards more proactive, addressing causes and not just the symptoms.”

When asked about the effectiveness of his organizations, Klossner responded there needs to be better data collection on use of oversight. “The key is building trust,” he said.

The next full meeting of the ad hoc commission is scheduled for Aug. 17 at the Fairfax County Government Center. For the Sept. 14 meeting, commissioners will be at Walt Whitman Middle School in the Mount Vernon area of Alexandria.

More information on the police policies review commission, including the full text of final reports and proposals from the communications and diversity, recruitment and vetting subcommittees is available at www.fairfaxcounty.gov/policecommission.