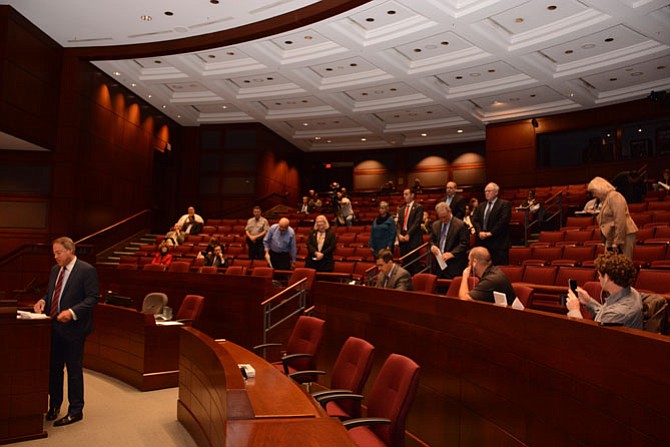 Ad Hoc Police Practices Review Commission chairman Michael Hershman introduced members of the commission who were present at the presentation of the final report to the Board of Supervisors on Oct. 20. Photo by Tim Peterson. 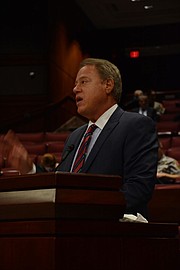 Ad Hoc Police Practices Review Commission chairman Michael Hershman was clear about what his group was, and was not tasked to do.

“We as a commission believe we were not appointed to defend the police department, nor was it our role to simply disparage the department,” Hershman said when presenting the final report and recommendations of the commission to the Fairfax County Board of Supervisors on Oct. 20.

The full 37-member commission met eight times between March 23 and Oct. 8. Five subcommittees met many times to more closely examine areas of mental health, use of force, independent oversight, communications and recruitment, diversity and vetting within the police department.

In that short time, Hershman said, they’ve done “what few other jurisdictions have been able to do: to take a police department that has the respect both within and without our county, and turn it into an ideal model in policing. They’ve had their problems — not as many as some other jurisdictions — but enough to warrant change.”

THE FINAL REPORT of the commission includes 142 recommendations spanning the subject areas of the subcommittees, including calling for creating an independent auditor position, civilian review board and more robust crisis intervention training and management.

Board of Supervisors chairman Sharon Bulova announced the formation of the commission in the wake of a lawsuit against the county brought by the family of Springfield man John Geer, who was shot and killed by Fairfax County police officer Adam Torres in August 2013.

The county had released scant details of the incident to either Geer’s family or the public, eliciting public demonstrations for justice and drawing the attention of U.S. Sen. Charles Grassley (R-Iowa), chair of the U.S. Senate judiciary committee, who wrote several letters to Fairfax County chief of Police Edwin Roessler and Commonwealth’s Attorney Raymond Morrogh asking why there had been a delay in releasing information.

Supervisor Penny Gross (D-Mason) said county staff was already beginning to look at implementing a number of the recommendations. She also questioned whether there was a budget timeline established for recommendations requiring additional funding.

County Executive Edward Long responded that county staff has been developing a “matrix” to identify all the costs from the recommendations, priorities and a phasing strategy to spread out additional funding over time.

The supervisors praised Hershman and the commission for the body of work they accomplished over the spring, summer and beginning of fall. However, the recommendation of a civilian oversight board drew several direct questions from supervisors.

Jeff McKay (D-Lee) asked why the commission recommended that no member of the review board be a current or former employee of Fairfax County, saying their employment “shouldn’t disqualify them from service.”

Hershman responded to McKay that the commission had discussed that concept at length and it was the feeling of the group that keeping the review board completely civilian would “ensure their independence and objectivity.”

Pat Herrity (R-Springfield) withheld his specific questions for the Oct. 27 Public Safety Committee meeting when the report is scheduled to be discussed in more detail, but said there were a few recommendations “that cause me concern.”

Chair of the Public Safety Committee supervisor Gerry Hyland (D-Mount Vernon), said the civilian review board would be “probably the most difficult issue for us to address.” He added he would be looking to hear input as to experience of similar boards in other jurisdictions and the types of reviews and cases they handle.

Hyland also referred to Hershman’s introduction where he said “many of our recommendations are interrelated and rely on one another to bring forward transformation,” and gave the example of funding additional mobile crisis intervention units. “If that’s not accepted, the effectiveness of increased Crisis Intervention Training by police officers may be lessened. If civilian oversight is not accepted, then the lack of confidence in our police department by many of the citizens who addressed our commission is likely to continue.”

“My reaction to that is when we look at the experience of our community, notwithstanding a few cases that have been difficult for us to handle, the reaction of the community that I represent, that all of us represent, the majority of people clearly support and have a very positive reaction to the Fairfax County Police Department and the job they do day in and day out.”

“I would hope we can talk about the civilian review board as to why that is considered essential to establish confidence in our citizenry and FCPD,” Hyland added.

Hershman responded, “We should understand policemen are going to make mistakes, no question about it, but we’ve got to make sure policies and procedures are in place to make sure mistakes are fewer and less.”

Supervisor John Cook (R-Braddock) added to the discussion he hopes to “continue the strong bond between our citizens and police department.”

“It’s also clear some things have to change,” he said.

Supervisor Cathy Hudgins (D-Hunter Mill) said she was “anxious” to attend the public safety committee meeting to discuss the report, especially after a “long term of not seeing them often enough,” referring to meetings of the committee itself.

Hudgins also expressed a need for civilian involvement in reviewing the report. “We need to hear this report through the lens of our community.”

“The Board of Supervisors and the Fairfax County Police Department recognize the importance of reviewing policies and determining new best practices as expectations from the community evolve with new technology and methods of communicating,” Bulova said.

“FCPD actively participated on and worked with the commission every step of the way to help achieve the common goal of maintaining a safe community and ensuring a culture of public trust in Fairfax County.”

Following the presentation, Hershman spoke to media and said though he was encouraged by the mostly positive response from the supervisors, “I would trade that praise for support for our recommendations.”

In getting these recommendations to the board prior to Nov. 3, Hershman also said he hopes both incumbents and candidates for the next Board of Supervisors “come forward with their own views before the election.”

THE BOARD OF SUPERVISORS will discuss the final report at the forthcoming meeting of the Public Safety Committee on Oct. 27 at 3 p.m. That meeting is scheduled to take place in rooms 9 and 10 of the Fairfax County Government Center, 12000 Government Center Parkway in Fairfax.

Videos and materials from the meetings of the ad hoc commission are available online at www.fairfaxcounty.gov/policecommission.