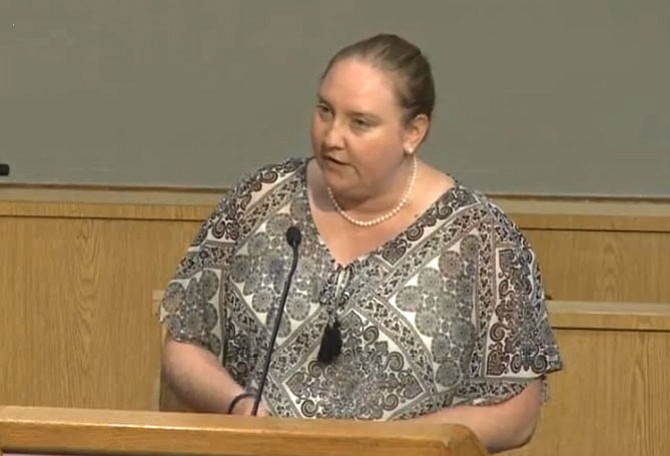 In their last meeting of the summer, Fairfax County School Board members began by remembering former superintendent Dr. Robert Spillane, who recently died, and recognizing outgoing members of the school system’s leadership team.

“He was one of the first people to reach out to me as I came on as superintendent,” said Dr. Karen Garza. The current superintendent called him “a gracious and impressive gentleman,” adding: “He’s a person who’s had a tremendous impact on this system.”

Pajardo’s career with Fairfax County spanned 34 years and included positions of teacher, assistant principal, principal and cluster leadership roles. In 20 years, Dockery was also an assistant and principal, as well as assistant superintendent of special services, before reaching her final position as chief academic officer.

During citizen participation, several speakers also praised Dockery. Sheree Brown-Kaplan, founder and chair of the Fairfax Alliance for Appropriate Public Education, said, “Through my personal experience as a parent and as a special education advocate, I have observed Kim bring substantive change toward a problem-solving approach to special education disputes.”

TAKING HER TURN at the microphone, Dockery thanked the board for the honor and closed by saying, “The classroom is where everything happens and we have to make sure that politics doesn’t overshadow the quality of the teacher in the classroom and the great administrators — those two things are the most important things to our success.”

“It reflects hard work and prudent spending,” Reed said. “It funds Strategic Plan priorities,” she added and “sets aside money for Fiscal Year 2017, when we’re going to need every penny we can get. It’s responsible action.”

The variances between the Third Quarter and Final reviews amounted to $33.2 million in funds available.

Of those, this final budget review includes $23.9 million that’s set aside, along with $4 million already earmarked from the Fiscal Year 2015 Third Quarter Budget Review, for a total of $27.8 million as a total beginning balance for Fiscal Year 2017.

“Given what we know the county is facing in 2017,” said Braddock representative Megan McLaughlin, referring to a projected $100 million shortfall, “I believe my colleagues are truly trying to help this school system find the best footing possible.”

Kimberly Adams, president of the Fairfax Education Association teachers’ union, praised past budget work for funding the on-time full-step increase in teacher compensation, and making “good on the promise of turf fields.”

“We appreciate work that started weeks ago, with joint board committees,” Adams said. “We need to see more work by both boards, more quickly. Our quality of life depends on it.”

When called to a vote, the board unanimously passed the review.

At-large member Ilryong Moon next motioned for approving the Fiscal Year 2016 audit plan, intended to improve the efficiency and efficacy of the school system. Moon explained that in addition to carryovers from the Fiscal Year 2015 audit, new components for 2016 would include performance audits of the online campus, home-bound and home-based instruction, and business process and turnover audits.

Garza commended the work of the audit committee, which most recently held a work session July 13.

“It’s a good approach to include the comprehensive evaluations,” Garza said, that will have “a significant impact throughout the system.”

AS A FOLLOW-UP, the board then voted to approve the process by which community members can apply to be part of the audit committee, as well as a timeline for how and when that group will operate. The committee comprises four School Board members and two appointed representatives from the community. Those two serve staggered two-year terms.

The request for community member applications began July 24 and will last until Aug. 21, with the first meeting scheduled to be held in October.

“We clearly will, with the addition of community members, accomplish our goals of many years ago,” said Mount Vernon representative Dan Storck, “to have a highly functional, independent audit process.”

During new business, School Board members received information about the future of the Family Life Education Curriculum Advisory Committee, which is made up of community members, teachers, administrators and members of the central office staff.

As of the meeting, two School Board appointments to the committee were unfilled, along with four student representative appointments, a physician and a middle and elementary school administrator. The remainder of the committee members’ term lasts until June 30, 2016.

The Family Life Education Curriculum Advisory Committee meets twice yet this year — Oct. 8 and Nov. 12 — at the Gatehouse Administration Center from 7-9 p.m.