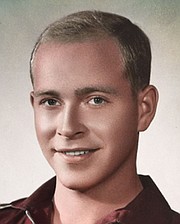 On May 8, 2015, Hynson H. Marvel, Jr. died at home with his wife Yvonne by his side. The couple had celebrated 42 years of marriage this past April. Born March 13, 1944, in Avondale, Pa., Hyns was the son of the late Hynson and Marguerite Marvel and the brother of Julianne Deturk.

Hyns served his country as a U.S. Air Force officer for 20 years on deployments that included service in Vietnam, Germany, Texas, and Washington, D.C. He was the recipient of multiple military awards including the Bronze Star Medal, Meritorious Service Medal, Joint Service Commendation Medal, National Defense Service Medal and the Vietnam Service Medal with four stars. His service reflected his love of country, his family, and our freedom.

Active with his family in their home of Alexandria for over 25 years, Hyns was always present for his wife and children. He served as Scoutmaster for his son Hynson, III at Troop 654 earning his Woodbadge and Brotherhood membership in the Order of the Arrow. Hyns coached many seasons of his daughter Francoise’s basketball and soccer teams and cheered her on during lacrosse games. Throughout his life he and Yvonne travelled extensively, visiting family abroad in the Netherlands, enjoying visits to Germany to see long-time friends, and embarking on cruises to island destinations.

Hyns and Yvonne retired to Richmond, Va., after his long career supporting the military in the Defense Intelligence industry. He spent time entertaining friends and continued traveling with Yvonne, sharing stories of his daughter Francoise’s breakthroughs in medicine, finding excuses to tell jokes to his daughter-in-law Caroline, endlessly playing with his grandsons Hynson IV and Henry; and hunting upland game with his son, Hynson III.

A Celebration of Life reception will be held at Army Navy Country Club in Arlington, Va., and the memorial service was held at the New London Presbyterian Church, New London, Pa., on Sunday June 7, 2015.