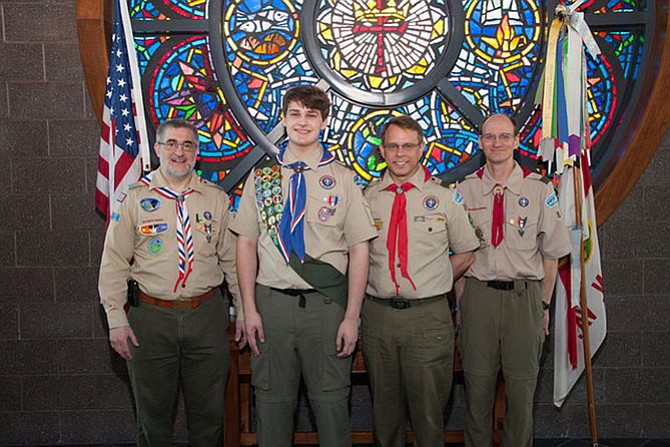 Robert H. Bork III, 17, of McLean, received the Boy Scouts¹ highest award of Eagle Scout at a Court of Honor conducted by Troop 869 at Trinity United Methodist Church. Robert, who is a Junior Assistant Scoutmaster in his troop, also received the Bronze Palm for remaining active in Scouting and earning additional merit badges.

Robert is the son of Diana and Robert H. Bork, Jr. He was presented the

States Submarine Veterans, Inc., and the FBI. American Legion Post 270 in McLean, recently selected Robert to attend Boys State in June and made him a member of Sons of the American Legion.

Robert thanked his family, his teachers, and his troop in his remarks

after receiving his award. He gave special recognition to Dr. Thomas Kiess who stepped down recently as Scoutmaster after six years.

"If there is one man who truly embodies what it means to be a Scout, and

the values that scouting teaches, it is Dr. Kiess; no one else even comes

Robert is a High Honor Roll junior at Commonwealth Academy in Alexandria. He was selected as a Yale Young Global Scholar in 2014 and is a nominee for National Honor Society. Also participating in the ceremony were: Robert Gerber, Life Scout; Peter Fox, First Class; and, Orlando Rivera, and Will Baxley, both Eagle Scouts. Robert Fisher, Eagle Scout, served as Master of Ceremonies. Assistant Scoutmasters John Baxley and Jose Rivera also participated.