What can work along Route 1? 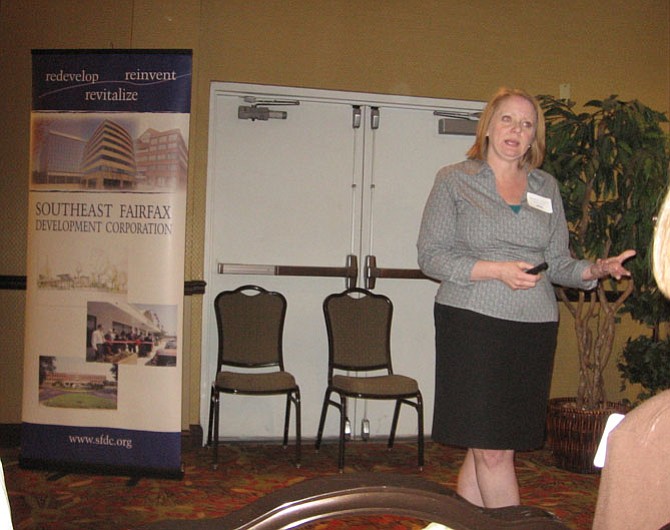 Heather Arnold of Streetsense speaks to attendees at the Retail Summit sponsored by the Sutheast Fairfax Development Corporation at the Hampton Inn & Suites on June 2. Photo by Jerry Fill.

Three experts in retail development made presentations at the Southeast Fairfax Development Corporation’s retail summit at the Hampton Inn & Suites on Tuesday, June 2. They offered case study examples of the evolution of thinking in planning, designing, and implementing retail developments which have applicability for the Route 1 corridor.

Each of the speakers presented historical perspective and practical overview of what matters when developing, redeveloping, or reinventing retail development space. Examples were presented of what works such as Bethesda Row in Maryland, and what doesn’t work when looking at overdeveloped retail space that can’t support itself and results in the closing of retail establishments.

Leonard said, “Place matters to retailers. Ground plan amenities will attract investment and promote profitable vertical density.” The U.S. has an average of 46 square feet of retail space devoted per person. Canada , Australia, and the United Kingdom are far below the amount of retail space allocated per person in comparison. Internet has had an impact but not as much as assumed. The Route 1 corridor has too many similar tenants and anchor tenants. There is a need to stress increased density development which will drive new and higher level retail location. Another important tactic suggested is to focus on quality retail location which is best clustered and situated off the street face.

Egelanian said, “There are six forms of delivering retail commodities, ranging from convenience stores that are more expensive to warehouse stores that are least expensive: Convenience stores, drug stores, grocery stores, discounters such as Walmart, category killers such as Best Buy, and warehouse stores such as Costco. The Internet, such as Amazon, is in a special category of its own. This is the way we purchase commodities in the USA; from the most convenient and highest price (7-11), to the least convenient and lowest price (Costco). Any purchase from the internet has already been commoditized. Buying on the internet is largely based on convenience. Still, the experience and physical relationship continues to attract the large majority of buyers to traditional retail stores. “

Arnold said, “There is too much retail on Route 1 and not enough of the right kind. Retail must be visible, accessible, and the right kind with sufficient demand to be sustainable. We must think about retail markets as part of an integrative design. We need to think about the relationships in the market design to make it work.”

Edith Kelleher, SFDC executive director, said, “SFDC’s Summits are designed to interest our diverse stakeholders, including local businesses, development industry, neighborhood residents and government staff. We are pleased to attract a cross section of these groups to every summit ”