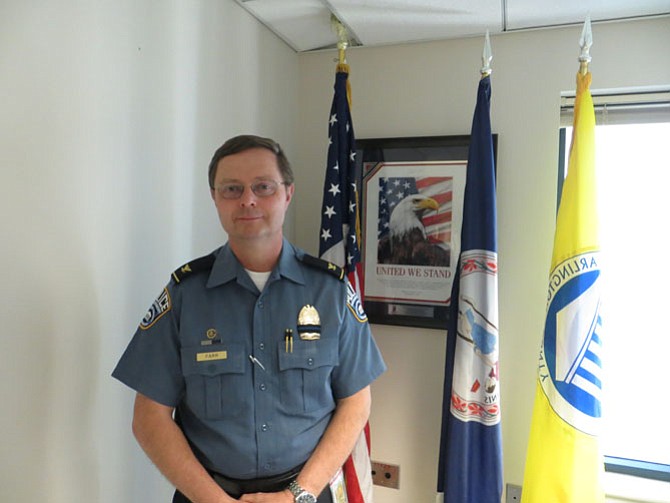 Demographics of the Arlington Police Force

For the most part, nothing changed. Jay Farr was doing what he’d normally been doing as acting police chief since Chief Doug Scott retired in March. But since he was selected by County Manager Barbara Donnellan to permanently fill the position on May 14, Farr says there’s been a slight change in the atmosphere. According to Farr, being made the official police chief in Arlington settles questions about policy.

Farr has previously served as deputy chief for 12 years, before that working in the department’s Press Office and Systems Management. The Systems Management office oversees the police budget and staffing. Farr said it’s the position most police officers like the least because it’s the most removed from traditional police work, but Farr said it’s the best position for understanding what life as chief of police entails.

As police chief, Farr said his primary goal is maintaining public trust in the police department.

“The police are under a microscope,” said Farr. “I’m confident we have great police, but we have to look at what’s happening across the nation.”

To this end, Farr laid out four priorities for the department to achieve over the next five years.

The first goal is to bridge the communication gap between the police and local citizen groups.

“We need captains and teams that deal with communities,” said Farr. “The west end of Columbia Pike is not as well reached. We need to look at pushing our messages out and reaching new demographics.”

But Far said this communication push is proving to be a challenge.

“We usually say we’re going to have a meeting Wednesday night,” said Farr. “Instead, now we have to find out where and when this group is meeting and go to them. We have to contact the community organizers and talk about what it is the police do. Some residents from foreign countries have zero trust in the police.”

Local community leaders praised the communication outreach from the police, but said there was still work to be done.

“The police have been very responsive and willing to talk with [community] groups any time we ask,” said Andrew Schneider, president of the Yorktown Civic Association. “I think what our citizens are looking for is communication.”

Schneider described a situation that occurred last year, where there was a series of break-ins in the neighborhood, and said in situations like that it’s important to be very open and responsive to the local community.

“They need to keep us in the loop,” said Schneider.

Like Schneider, Pryor said that open lines of communications with the police can help local citizens be aware of suspicious activity.

The department’s second priority is to diversify the Arlington Police demographics. Farr said the department struggles to recruit Hispanic or Latino officers from the local community.

“The biggest challenge is what’s happening nationally: the police misuse of force,” said Farr. “A young guy or woman will be thinking twice about joining because there’s an erosion of trust.”

Farr identified a few tools to help police recruitment. One was school resource officers, who can assist students and keep them from paths that would exclude them from a career in law enforcement.

But Arlington still has to compete for qualified hires with Fairfax and Montgomery counties. Farr said the best way for his department to get the upper hand is to have satisfied police officers on the street who are happy to recommend their work. The other incentive, though, is outside of the police’s hands and back on the county’s.

“The job pays well, but it’s costly to live here,” said Farr. “Most officers live in neighboring counties. Without affordable housing, it’s a struggle to get folks to come here.”

Farr also said the police will maintain transportation and traffic safety as a priority,

According to Farr, the department also needs to plan for changes in technology.

“Body cameras are going to come,” said Farr. “My main concern is that the tech is ahead of the law, so we’re going to have a lot of policy and legal issues.”

“We will probably institute a pilot program in this year, in June or July, but I’m not looking to be the first one out the door on this,” said Farr. “We haven’t heard a big push for this yet from the community.”