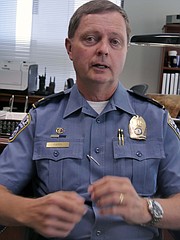 Chief Jay Farr, who has served with the Arlington County Police Department (ACPD) for 28 years and was appointed chief in May 2015, recently discussed the department’s Restructuring Plan.

The plan involves less emphasis on petty larceny to focus on more serious violent crimes, consolidation of the three community outreach districts into one with fewer events on a temporary basis, and continued emphasis on recruitment and retention efforts.

Chief Farr, you announced a restructuring plan for the ACPD that was put in place on May 13. What have been the reactions?

Chief Farr: There have been less feedback or concerns than I expected. We made some slight changes, but overall day-to-day hasn't changed. People will need to be patient.

You mentioned that you have had staffing challenges — some due to resources, some retention, some workplace issues. Can you describe the retention issues in more detail?

Chief Farr: The job market is good but there are a lot of competitors. We are competing to get officers through multiple counties. In addition, it is expensive to live in Arlington and very few of our own people live here. The cost of living in Stafford, for instance, is much lower and many of the counties have been paying better wages.

In addition, if you are an Arlington County police officer, you may have to pay tolls to drive here from where you live. The state didn't help by adding tolls on 66. The local police have to pay to park their own car. In Prince William they have their own parking garage. It is a question of economics. If you're a young police officer 5-7 years in and thinking about starting a family, you have to make decisions.

And we have been losing about two officers a month over a long period. There has been an unusually high turnover the last two years with people leaving to seek employment elsewhere. They leave to go back home, New York, the West Coast. It's part of the climate. It costs too much.

The minimum number of staffers had dropped. We were calling people back in on their days off. We need seven additional to cover training, sick and vacation. We were worrying about burnout and a greater vacancy rate. It has a cascading effect.

What about the workplace issues?

Chief Farr: I've seen different cycles come and go in my 38 years. But since post- Ferguson, there has been a hyper focus on police action. It makes it a little more difficult to attract officers. The pool has been reduced and we try to keep people in class and diversity. It was really bad after Ferguson. If one police officer did something wrong, people blamed every officer. It was a sad thing for me to see. There was a national narrative around policing with a lot of vitriol aimed at you. It dissuaded people from coming in. You're 23 years old and you're sitting at roll call. It's hard not to have it impact you. I will say there is less of that now.

One of the elements of restructuring involves the community outreach. What will that involve?

Chief Farr: I have consolidated the three districts teams into one with one organizational structure. The key is that I didn't abandon the community events but modified it. We'll do what has community interest at the time. This means we probably won't do the Fill the Cruiser with Toys at Christmas this year or the big block party. We had about 6,000 people at the block party but it was very labor intensive. It cut into the day-to-day. But there is an appetite to do the Fill a Cruiser with Back to School Supplies and the resources for that aren't overwhelming. We'll probably continue the Coffee with a Cop. We'll probably ask the Civic Associations to consolidate the meetings we attend.

You have indicated your officer allocation is 370 but you are currently at 320 with 50 vacancies. What are you doing to remedy the shortfall?

Chief Farr: We have great outreach for recruitment. I was lucky to have leftover training dollars last year due to the shortfall of officers and I could reallocate it toward outreach. We have Metro bus ads that we know have generated interest. We also have an ambassador program where we go to meet with instructors where the officers have come from and build relationships. We are already seeing dividends.

As a result we have 26 people currently in training, the largest class ever. We'll come close to doing it again. However, it takes over year to train an officer so those I hired in January I won't see until May next year after they have finished the Academy and finished their field training.

How does the pay rate compare to other jurisdictions?

Chief Farr: Very good dollars last year. We consolidated Police Officers 1 and 2 to compress to a single grade to move up. The county brought us up to 7.25 percent last year. That put us back in the range. The county has been good the entire time I've been with this county. What is tricky is that there are four different law enforcement agencies that do work in the county. We are the lowest paid of the four. There are complicated pay comparisons across the bridge where there is a $10,000 differential and in an entirely different law enforcement world.

The question has been raised why Arlington needs so many law enforcement officers when there isn't that much violent crime.

Chief Farr: That is a good question. There is no magic number. This is where we have invested proactive work before an incident. We maintain order through constant contact and outreach. There are many calls for service where no one gets arrested. We work with merchants to work through issues. Arrest is not always the best solution.

You have indicated the restructuring changes are temporary; how long is temporary?

Chief Farr: Based on what I have seen so far about the upcoming budget, there are still some differences. The city manager froze 10 positions for a year. I don't anticipate returning back to some things again. The silver lining is that some things we have done traditionally may not need to continue.

For instance petty larceny. We don't have the resources for petty larceny. There is a low success rate unless somebody sees it happen. But they don't just show up on your door. The priority will be violent crimes against people.

Traffic is a big problem but we have reduced the motor squad by a couple of motors. That means a specific operator has to be more cognizant of priorities on a specific day, has to prioritize where to put efforts. That may mean not patrolling for speeding on side streets.

For more information about the restructuring plan see the ACPD website video: https://police.arlingtonva.us/.