School will move to a new, much larger site in Loudoun County. 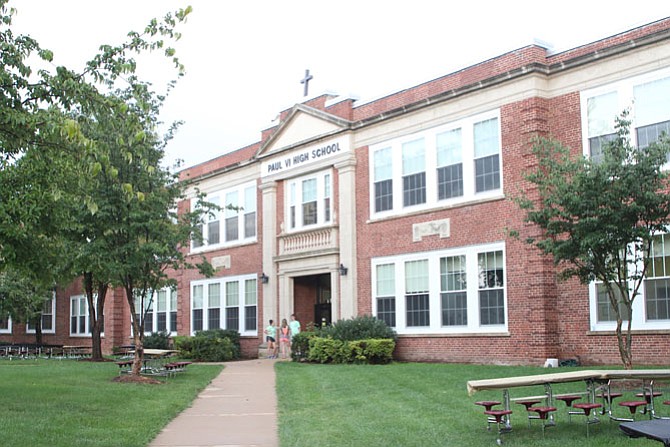 Paul VI High will move from the City of Fairfax to South Riding in 2020. Photo Courtesy of Eileen Curren

It’s the end of an era and a done deal: Paul VI High School is leaving the City of Fairfax for a new campus in Loudoun County. And while it won’t happen until 2020, it’ll be a big change for both the school and the City – but one they both saw coming.

“We’ve worked in good faith with the PVI community to encourage the diocese to allow the school to stay in Fairfax,” said Mayor Scott Silverthorne. “While the decision is deeply disappointing, it’s also not unexpected.”

The new location is 12 miles away, at the corner of Gum Spring and Braddock Roads in South Riding. The Catholic Diocese of Arlington acquired the property in 1987 and, in December 2013, expressed its intention to evaluate it as Paul VI’s future home. Then last Wednesday, June 3, it announced the move.

According to the diocesan Office of Communications, it was determined that the current facilities are being used to their maximum potential and can’t meet the long-term, educational needs of the students. The 80-year-old building, previously housing Fairfax High and GMU, has required substantial repairs since its acquisition by the diocese in 1983.

OVER THE PAST 32 YEARS, the diocese has invested $15 million in Paul VI’s campus, but the rising costs of building maintenance are unsustainable. Retrofitting the building is cost-prohibitive and, since site expansion isn’t possible, there’s a forced cap on enrollment. So the diocese is looking forward to relocating the school from its current 18-acre campus to a 68-acre property.

“The new campus will allow us a facility that fits our needs and strengthens our school’s legacy of excellence, with state-of-the-art facilities able to accommodate diverse academic needs and robust extracurricular and athletic programs,” said Principal Ginny Colwell. “Paul VI Catholic High School has been, and will continue to be, an academic institution that stresses the Gospel values and teachings of St. Francis deSales, while educating the whole child.”

The larger, modern, new school will cost an estimated $60 million, and PVI students, faculty and staff will be involved in planning the new campus. Diocese spokeswoman Elise Italiano said the move won’t affect any current Paul VI students or the incoming Class of 2019.

“I am so proud of the achievements of the students, faculty and staff of the Paul VI community,” said Sister Bernadette McManigal, Superintendent of Schools for the Diocese of Arlington. “It is with great excitement that I look forward to PVI’s future in a new complex which will enhance the students’ educational opportunities.”

Silverthorne has pledged to work with the diocese to make the transition as smooth as possible. Meanwhile, the diocese is now in final negotiations with a developer who’ll formulate plans for the property in cooperation with City planning officials. But any future land-use decisions about the campus will ultimately reside with the City Council after considerable input from the community.

Like the mayor, former City Councilman Dan Drummond is also sad to see the school move elsewhere. His wife attended Paul VI, as did two of her three brothers, so the Drummonds were “looking forward to [having] it as an option” for their two younger children “since it would have been right down the street from us.” (Their eldest child is going to Bishop O’Connell next year, partly to play field hockey and row crew – two sports not offered at PVI).

“The loss of PVI from the City of Fairfax is a loss for the whole community,” he continued. “It will impact our local businesses, as well as be one less option for those parents wanting to provide their children a Catholic education. In short, the loss of PVI will leave a gaping hole in our community. It is a City institution that will be missed when it closes its doors in 2020.”

But the diocese contends that the move to a brand-new building in more spacious surroundings is necessary for the school’s continued success. “The relocation of Paul VI High School to a world-class facility ensures that future generations of students in our diocese will receive Catholic education at the highest level of excellence,” said Arlington Bishop Paul S. Loverde.

Because almost half of Paul VI students this year traveled to school from points west of the City, the diocese believes the South Riding campus will serve them best. Furthermore, Since Paul VI was established in 1983, the diocese’s population has skyrocketed in the region west of the campus. Indeed, some 92,000 Catholics live in western Fairfax County and Loudoun County.

SO THE SOUTH RIDING CAMPUS will be accessible to students in two of the diocese’s most populous regions. And the diocese will provide bus transportation for students traveling to and from the new site and include stops within the City of Fairfax.

“While it will be hard to say goodbye to the many friendships we have established in the Fairfax area, PVI looks forward to establishing new friendships and relationships with our neighbors in Loudoun,” said Colwell. “This is an exciting time for PVI, and I hope our community and alumni become engaged and involved in this transition. The spirit of PVI is who and what we are – it is not where we are. The traditions of PVI travel with us wherever we go, and I am looking forward to this journey.”