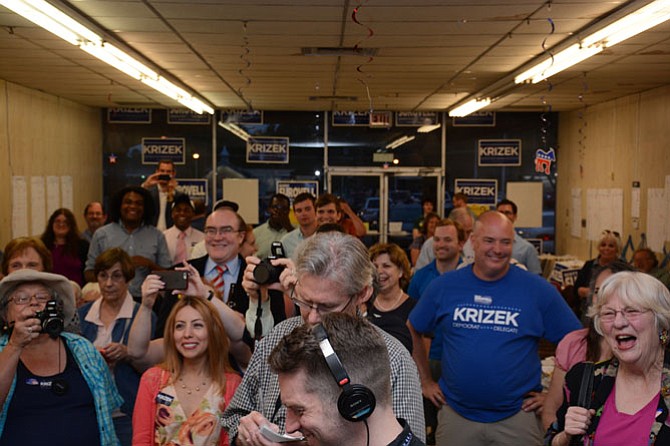 Campaign staff and supporters gathered in a former clothing store along Route 1 in Mount Vernon to cheer on Dan Storck and Paul Krizek as primary results came in. Photo by Tim Peterson.

From left: Del. Scott Surovell (D-44) celebrates with Dan Storck and Paul Krizek, unofficial winners of the Democratic primary for Mount Vernon supervisor and 44th District representative to the House of Delegates, respectively.

Campaign staff and supporters gathered in a former clothing store along Route 1 in Mount Vernon to cheer on Dan Storck and Paul Krizek as primary results came in. 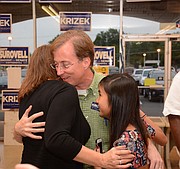 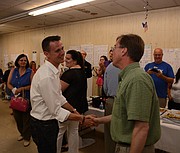 Paul Krizek’s father Eugene talks with Justin Brown, who challenged Paul for the 44th District Delegate seat but lost in the Democratic primary.

After polls closed at 7 p.m. and results from precincts started to trickle in over cell phone, Mount Vernon High School Senior Catherine Ming grabbed a marker and began filling in turnout charts hung on the walls of a former clothing store that’s been the joint headquarters for the campaigns of Paul Krizek for 44th District delegate, Del. Scott Surovell (D-44) for 36th District senator and Dan Storck for Mount Vernon supervisor.

She doesn’t have the gratuitous sunburn of the pavement-pounders to show for her work on the day of Virginia’s Democratic primary. The intern for Del. Scott Surovell (D-44) spent the day inside phone-banking.

As the scales began to tip in Krizek’s and Storck’s favors, Ming said, “It’s great to see the hard work pay off. I have respect for the opposing candidates and their staffs, knowing the effort they’re putting in.”

Around 8:17 p.m., Krizek’s challenger for the 44th District Delegate seat Justin Brown entered the room. He strode confidently up to Krizek, the two shook hands and exchanged a few words as Brown conceded the race and congratulated the winner.

“This is the way politics should be,” said Mount Vernon resident Bethany Peterson. “Brown is a class act: He left his supporters and came in person.”

According to unofficial results from the nonprofit Virginia Public Access Project Virginia Department of Elections, Krizek won with 3,013 votes (68.06 percent) over Brown’s 1,414 (31.94 percent).

“It was a good, clean race,” Brown said afterward. “It was good for the district, competition is a good thing. Now I’m ready to support Paul.”

Storck was the last candidate to arrive at the event. He was met with applause and a thunderous chorus of “Happy Birthday.” “This is the best birthday ever,” Storck said later.

When it was clear Storck and Krizek had taken the lead in their respective races, they joined Surovell on a small podium at the back of the room. Surovell had publicly endorsed both candidates.

“There’s a changing of the guard going on in the area,” Surovell said. “I had to think long and hard about who would be a good person to step up. There’s a lot of folks in need down here. I called this guy right here,” Surovell added as he congratulated Krizek.

Krizek spent much of his speech thanking his family and staff. “A campaign is making bread,” he said, “you need a lot of things to make it rise: number one is yeast, and that’s love, I’ve got the love of these guys (he hugged his wife and daughter) and my parents.

“And you’ve gotta knead it, that’s the hard work, the muscle,” Krizek added. “We baked a heckuva loaf of bread, didn’t we?”

In the delegate race for the 45th District, Mark Levine won the Democratic nomination with 27.8 percent of the vote. Levine and four other candidates ran to replace Del. Rob Krupicka, who resigned after the current legislative session. With a campaign financed by private individual donors and a $70,000 personal loan, Levine said his campaign was a grassroots effort.

“We won because people invited me into their living rooms and we chatted,” said Levine. “And now, we owe no one anything.”

ON STORCK, Surovell said, “At the end of the day, people saw the results Dan Storck has delivered for the community,” and referenced Mount Vernon schools that have opened, are scheduled to open and new artificial turf fields that have been completed or are scheduled — all under Storck’s watch.

With just under 44 percent of the 5,995 votes cast in the Mount Vernon District, Fairfax County School Board member Storck eclipsed Planning Commissioner Tim Sargeant’s roughly 40 percent. Sargeant had left a message for Storck “to congratulate him on a hard fought campaign. I want to thank the many people throughout the district who supported me. I can’t thank them enough. This has been my first run for elected office and it ihas been quite an invigorating and encouraging experience. My campaign volunteers and supporters worked very hard and I am deeply grateful. I will return to my at-large role on the Planning Commission and looked forward to continuing to work to the benefit of the District and the county.”

Storck will face Republican businesswoman and activist Jane Gandee in the November election to replace Gerry Hyland and represent Mount Vernon on the Board of Supervisors.

“I want to thank Gerry Hyland for 28 years of service,” Storck said a campaign event after the polls closed on Tuesday June 9. “His legacy will be very difficult to replace in the short term.”

“There’s a lot to get done, we got a great start here tonight,” Storck continued. “Obviously funding schools fully, getting rail down Route 1, our environmental opportunities, building on our large tourist attraction — we need to get those moving more quickly.”

Behind Storck and Sargeant were lifelong Mount Vernon resident, small business owner and appointee to the Human Services Council Jack Dobbyn with nearly 10 percent of the votes, and marketing and research firm owner Candice Bennett of Lorton with around 6 percent.

— Reporters Gerald A. Fill and Vernon Miles also conributed to this story.