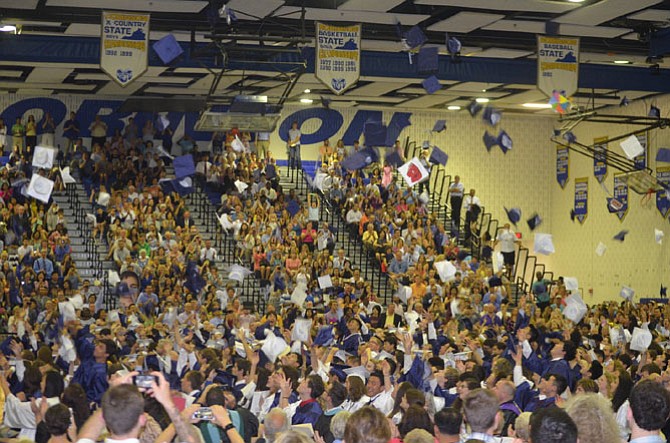 Woodson Class of 2015 toss their hats in celebration at the end of the ceremony. Photo by Dominique Escalera/The Connection

W.T. Woodson’s class of 2015 graduates entered to Pomp and Circumstance and the roar of proud witnesses on Tuesday, June 16 at Robinson Secondary. Seniors walked eagerly to take their seats and listen to the last ceremony of their high school careers. 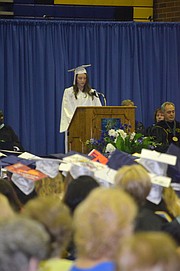 Student speaker Emma Burke encourages her fellow classmates at Woodson Graduation on Tuesday, June 16: “Let’s agree to impress ourselves, not anyone else.” 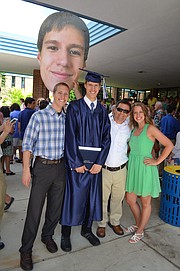 One large head above a sea of faces, Joshua Arnold’s face was very visible during the ceremony. From left: Dennis Arnold, 2015 senior Joshua Arnold, Chris Peterson and Brenda Arnold.

Emma Burke, honor graduate, was the student speaker. She led the class on a journey of remembrance about each year in high school.

“I couldn’t decide what my speech should be. Should it be entertaining? Sentimental? Life changing?” she started, addressing her class. “And you, class of 2015, were not helpful.”

Burke emphasized the feeling of proving oneself to parents, teachers and even peers. Her advice for the future was simple.

For graduate Joshua Arnold, he could see his own face staring at him from the crowd: An enlarged poster of his head hoisted by his siblings Dennis and Brenda and his friend Chris Peterson.

Clinton Muhanyi’s family in the audience numbered 12 people. The Muhanyi family house burned down on June 3 and they have spent the past two weeks living with kind friends who took the family of 13 in. “It has been hard recently, but we are so grateful to everyone,” said proud father Pastory Muhanyi, watching his son graduate.

Guest speaker Dr. Angel Cabrera, president at George Mason University, wasn’t just there to impart wisdom on the class, but to cheer on his own graduate.

“It is unusual to have parents to speak at graduation, so I will be careful so I don’t ruin it for another parent who may want to do it in the future,” Cabrera said in his speech. He impressed three important lessons on the students, the first being to attend college. Cabrera listed all CEOs who attended non-ivy league colleges and still succeeded, telling the students it doesn’t matter where you go but what you do when you're there. He emphasized the hashtag “#BYOP” standing for “Be Your Own Person,” encouraging student to embrace what makes them weird. And finally he introduced them to an app. “It is a green app near the bottom of the screen that has an old-fashioned phone on it, use it to call mom,” said Cabrera, at the closing of his speech.

A total of 492 graduates crossed the stage to receive their diplomas from Woodson Principal Dr. Scott Poole, bringing the ceremony to a close with the students performing the customary cap toss while shouting “We did it!”