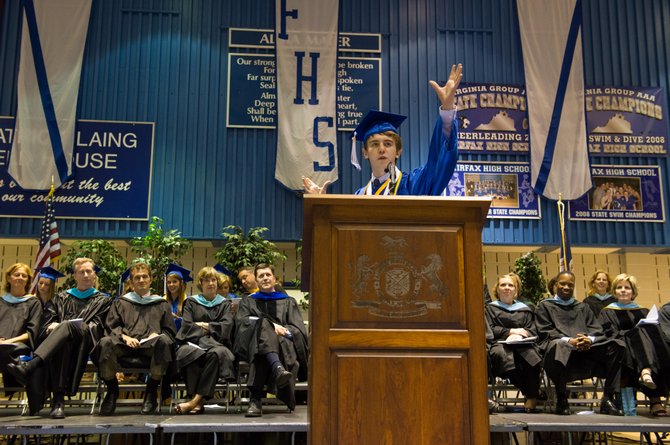 A packed basketball gym with threatening weather looming outside made for a dramatic start to the graduating Class of 2013’s commencement ceremony at Fairfax High School Thursday, June 13. 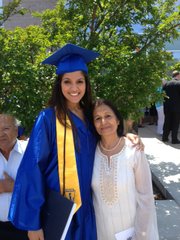 Aashna Dhayagude with her grandmother Vinita “This fall I’m going to James Madison University. I want to study marketing and management but I’m not sure what I want to do with it. Well, in 10 years I see myself living in New York City. I just love that city so much and think it has so much opportunity.” 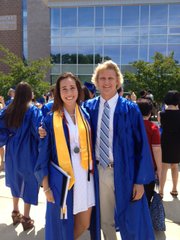 Megan Green, with longtime friend Thor Rasmussen “University of Virginia’s where I’m headed. I hope to study business there. I hope to have traveled the world in 10 years, which is kind of why I want to be an FBI agent.”

Ian Cooper with his whole family “I’m going to the Air Force. I just want to travel the world. Ten years? I guess I just settle down with a family. I want my family to be close with me and have a good relationship.” 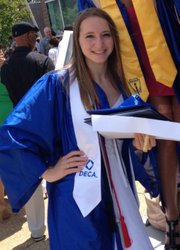 Allie Lerner “I’m going to Virginia Tech so I can study business. Having a successful job and maybe married or have a boyfriend. I’m not so sure. I’m just happy that I graduated.” 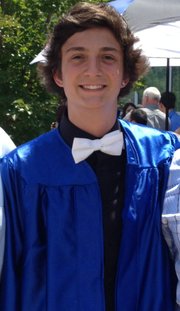 Travis Godfrey “For college I’m going to East Carolina University where I want to work on how I can get a job in security systems. Working on a high paying job in some place like Lockheed Martin is a dream of mine. I also hope to have a nice family. But, in those 10 years I hope to become my own boss.”

Goldfarb, addressing the students, said, “Your parents are your first teachers. Please stand and recognize them. And also to your teachers who have taken up the task of instructing you through life.” He continued to say a few words about keeping a positive attitude in a world of adversity. “Persistent optimism,” Goldfarb advised, “or what I like to call ‘the winning attitude,’ can be just as important as ability.” The students applauded and senior Katherine Rossbach introduced the guest speaker, Kevin Simonds.

As a former faculty member of Fairfax High School, Simonds talked about his experiences in teaching. He also emphasized the perception of success, “Is it a resume or a state of mind? Recognize the limitations of your strengths and be awesome in them.” The class gift to the faculty was several bricks that had the words “Once a Rebel, always a Rebel” presented by student Natalie Dillinger.

Chosen by his peers, Alex Griffin gave an unconventional speech for a graduation setting. In a playful, comedic tone Griffin said, “We are all dumb but, we have plenty of time to figure out how to get those old smart people in retirement homes … ” The speech ended and Principal Goldfarb then presented the class with their diplomas.

Seniors left the gym to a warm, clear sky.