One Arlington family discusses the joys of adopting several birds and a rabbit. 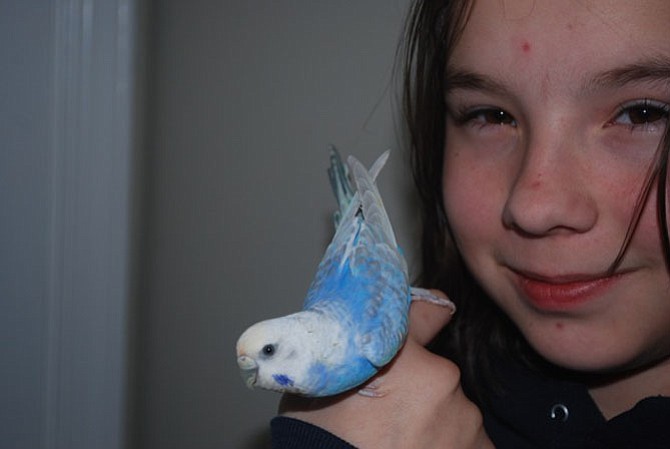 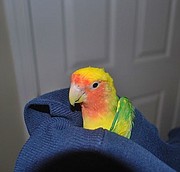 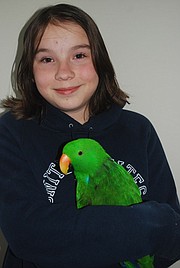 Julia Adde holds Boo Boo, an eclectus parrot. Boo Boo has a phenomenal vocabulary, listens to music, and likes to spend time with Julia as she does her homework.

Boo Boo, on Julia Adde’s shoulder, where he often likes to hang out and nuzzle her.

Thirteen-year-old Julia Adde delights in having her pet parrot, Boo Boo sit with her while she does her homework. Boo Boo, an eclectus parrot, was the fourth and most recent bird to join the Adde household. Boo Boo brought a lot of personality and fit right in with the family.

“When I get home from school, I go say hi to the parrot,” said Julia, an eighth grader. “I usually spend at least an hour with him. I take Boo Boo to my room and do homework with him. It’s nice to have someone there while you’re working.” Julia bonded with Boo Boo right away and spends the most time with him.

Barbara Adde, Julia, and 10-old brother Ben all volunteer at the Animal Welfare League of Arlington (AWLA). They have adopted all their birds from there. Boo Boo was adopted on Jan. 16 of this year and joined two parakeets and one brightly-colored love bird. They also have a fluffy rabbit, Simba, adopted two years ago this very month.

“It’s nice to have someone there while you’re working.”

Shortly before Boo Boo joined the family, one of their pet love birds, Luna, died. The family wanted a new bird and their mother, Barbara Adde, thought that maybe they would be ready for a bigger bird. “We just loved our love bird.”

Barbara Adde is allergic to cats and her husband is allergic to dogs. Adopting birds have become the perfect fit. They love taking care of the birds. “There’s a great deal of friendship involved,” said Barbara Adde. With friendship comes communication, which is something all the birds in the house do very well. “When I come downstairs in the morning, [Boo Boo will] say ‘good morning,’” Barbara Adde said with a laugh.

The parakeets and love bird join in as well. “All the birds sing,” she said. They are often hand-fed, spend plenty of time outside their cages and love having quality time with the family. While the kids are playing the Xbox, the birds are usually nearby, just hanging out. “They’re very sociable. They like to be around us.”

The pets have also taught both children about responsibility and care. Julia and Ben participate in much of the care for the birds and rabbit. They hand feed the birds, give them regular baths and go along on veterinary appointments.

Julia volunteers at AWLA at least a few times a month. She wants to be a veterinarian when she grows up. “It’s a personal achievement,” she said about being a pet owner. “It’s nice to take care of something else. They don’t judge you. They communicate with you.”

Ben also volunteers at the shelter, but has different aspirations from Julia. “I kind of want to be a racecar driver,” he said. He also spends a great deal of time with the family pets and usually takes them out of their cage when he comes home from school too. “There’s a lot of emotional bonding,” described his mother.

Julia and Ben have many stories about each animal’s personality. Not to be lost in the shuffle, the rabbit Simba is very good about having a bath. When he’s done, “he sits on the edge of the sink and waits for a brush,” said Barbara Adde. Boo Boo likes showers and the Addes use their hand-held shower device to make it easier. “He even lifts his wings” in anticipation of the bathing process, she described.

To learn more about the adoption and volunteer opportunities at the AWLA, call 703-931-9241 or visit http://www.awla.org">www.awla.org. The league is located at 2650 S. Arlington Mill Dr in Arlington.

Barbara Adde illustrated some of the challenges with so many pets. Most of them arise when they need a person to care for them. In such cases, they find it easier to have someone come into the home rather than disrupt their environment. They faced another test when they lost power just a few days ago during the storm. They can’t just put themselves up in a hotel, it takes much greater coordination to ensure all the pets are cared for before making any kind of plan.

Communicating and developing a bond with the animals is worth all the extra care and coordination. Boo Boo has a particularly verbose vocabulary. He asks the various family members: “What ya doing now?” He also tells them: “Love you.”