AWLA shelter open to everyone. 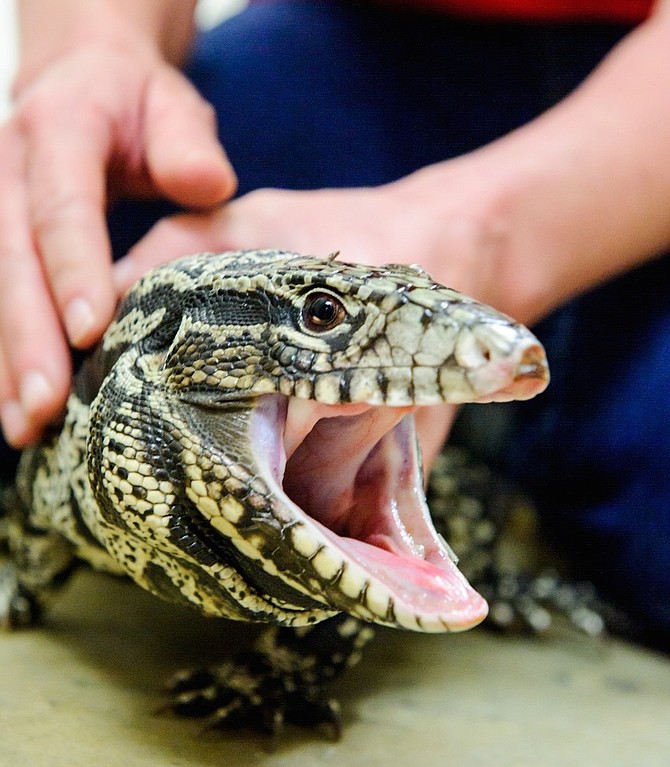 One of the Argentinian Tegu lizards found outside the AWLA. Photo by Shelley Castle Photography

People often think of cats and dogs when they think of the AWLA, so they can be surprised when they visit the shelter and meet a much wider variety of animals, including rabbits, ferrets, guinea pigs, hamsters, birds, turtles, snakes, lizards and sometimes even fish. And those are just animals available for adoption. Our Animal Services officers also assist wild animals that have been injured or orphaned. These animals are kept separated from domestic animals and only stay at the shelter until they can be released or transferred to a wildlife rehabber.

As an “open access” shelter, the AWLA provides care for any animal in need from the City of Alexandria, which means always being prepared to handle any creature that might need our help. Last year, AWLA Executive Director Megan Webb was leaving the shelter late one evening and noticed a large box tucked under a bush. She pulled it out and, hearing scratching noises, guessed there would be kittens inside, though she didn’t hear any meowing. When she opened the box and gently pulled out a large towel, she was surprised by a large monitor lizard, who popped his head out and hissed at her. She was able to safely wrangle the reptile and a second lizard still hiding in the box. Two more of these Argentinean tegu lizards were left outside the shelter in subsequent days.

All four lizards eventually found homes where they could be properly cared for and safely handled, thanks to relationships with local reptile rescue organizations. Fortunately, the AWLA is stocked with a variety of housing accommodations and food to meet the needs of many animals that might arrive — however they do so.

We find that people often assume small animals require less care and may be a more appropriate pet for a child than a dog or cat, but often, those same animals are surrendered to us because the child has lost interest or does not understand their new pet’s needs. When considering adopting a small animal, we suggest making them a family pet rather than putting all of the responsibility for the animal’s care on a child, which can be overwhelming and possibly even make them resentful of the animal. Making it the family’s pet encourages all family members to be involved in the care of the animal and models this commitment for the child to follow.

Rabbits rank right behind cats and dogs as the animal we shelter most frequently. The majority of these rabbits are surrendered by owners, many brought to us in September and October after a child has gone back to school. When thinking of a pet for your family, it is important to consider the life expectancy of the animal and what life milestones your family will be reaching during that time. Did you know the rabbits live 8 to 10 years? That means that a rabbit adopted when a child is 12 could be left with parents for years after the child has left home.

Like all animals, rabbits have wide ranges of personalities, and picking the rabbit that matches your lifestyle is essential. We recently had rabbits named Peanut and Juliet at the shelter who could not have been more different. Peanut was a gregarious rabbit who sought attention — and ear scratches — from anyone who came near; he would push his head toward them for a pet and then melt to the ground in bunny bliss. Peanut needed a home where he could be at the center of everything. On the other hand, Juliet, a beautiful white rabbit, came to us from a situation where she had very little experience with people. She would give a strong warning thump with her leg whenever a stranger came too close, so she required a little extra time and patience from AWLA staff and volunteers. Juliet was seeking a home where she could bond strongly to her person but also have a quiet space for her enclosure to retreat when visitors came over. Both Peanut and Juliet have found those matches with their new families.

Birds often come to the AWLA as strays, especially when winter changes to spring and people open their windows, forgetting that their pet bird might take the opportunity to spread his or her wings. This past spring, a cockatiel the shelter staff dubbed Grayscale had flown into a stranger’s house, surprising the homeowner who eventually caught the bird and brought him to us. Grayscale had clear signs of having been on his own for a while, but as with all animals who come in without owner information, shelter staff shared his photo and story with the community in hopes of finding and reuniting him with his family. A video of Grayscale whistling “If You’re Happy and You Know It” found a following on social media, and when no one reached out to the AWLA during the state-mandated “stray hold” period, he was made available for adoption. Happily Grayscale found a new home just the next day. We still hear from people checking in to see how he’s doing.

If you’re interested in giving any type of animal a home, the Animal Welfare League of Alexandria is here to help. Our staff is versed in the specific needs of many species and can help you consider the realities of bringing a new animal into your family, helping you plan for “pet success” long after the initial love-at-first-sight moment.

The AWLA recently changed its logo to represent the many animals who walk, hop, fly or swim through the shelter doors, so the next time you are looking for your perfect pet — of any breed — we hope your first stop will be the Vola Lawson Animal Shelter.