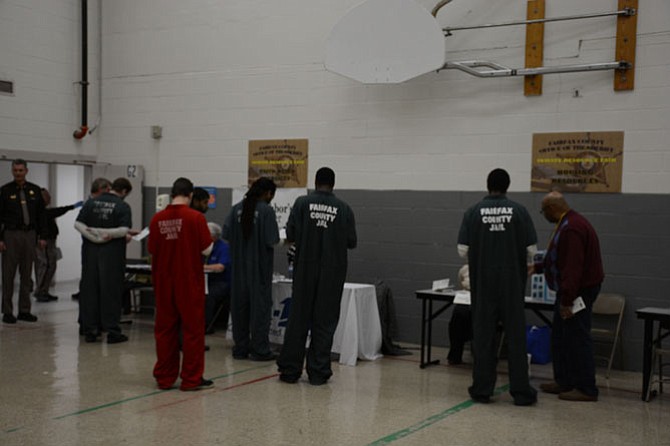 Two hundred inmates of the Fairfax County Adult Detention Center participated in the facility’s first Inmate Resource Fair on March 3, learning more about support services available to them both before and after their release back into the community. Photo by Tim Peterson. 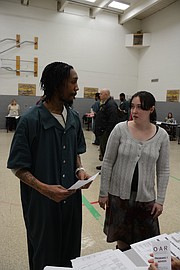 They’re hoping the third time will be a charm: 34-year-old Demeterius Spann of the Richmond Highway area of Alexandria and 29-year-old Nydale Sheppard of Reston have each been incarcerated three times. And with information gained from the Fairfax County Adult Detention Center and Fairfax Re-Entry Council’s first Inmate Resource Fair, they’re determined to make this latest stay their last.

“Before, I didn’t have a plan and I kept landing here,” said Sheppard, who has served 25 months for violating parole and is scheduled for a Dec. 21 release.

Spann, previously a county employee with the Department of Sanitation, has been in seven months and has a trial scheduled later this month.

“I’m here to better myself as a person and expand my horizons to other avenues,” he said.

TWO HUNDRED of the jail’s roughly 1,000 inmates had the chance to meet with a spectrum of national, state and local vendors about services that will help them transition to life after prison: services like housing, job placement, substance abuse and mental health treatment, domestic relations and veterans administration.

“The state prisons have resource fairs and we wanted to bring that great idea to the county,” said Alexandria Ruxer, senior probation and parole officer with Virginia State Department of Corrections. “These individuals are coming to our community. Studies have shown if we smooth their transition, that their basic needs like food, housing and clothing are met, the likeliness of recidivism goes down.”

Ruxer was part of a team that organized the March 3 fair, along with 1st Lt. Steven Quesenberry, supervisor of inmate programs and recreation for the Sheriff’s Office.

“When released they might be lost,” said Fairfax County Sheriff Stacey Kincaid. For men and women who re-enter the community without prospects for jobs, housing and other basics, they may “go back to where they came from” and resort to unlawful activity just to survive.

Quesenberry said they would like to offer this kind of event once every six months, to inmates who aren’t on extended sentences and have already taken initiative to improve themselves through classes and services offered at the jail.

Jamie Milloy coordinates inmate programs for OAR, a multi-service organization for ex-offenders with an office in Fairfax. The classes and services including re-entry planning, fathering and personal finance management begin while the inmate is incarcerated and are available once they’re released as well. 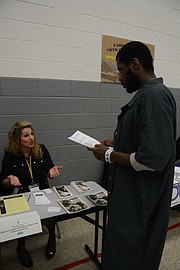 “Today I saw a lot of names on the list I’ve never seen before,” said Milloy, whose 25 classes per week serve 3-400 inmates with a waiting list 100 deep. Though information is there, getting it to everyone isn’t easy, which is why Milloy is glad they widened the pool for the fair. “This is their shot. They didn’t just pull inmates already involved in the programs.”

Previously an employee at McDonald’s, Sheppard expects to move to Maryland with family and friends when he’s released and pursue tile-laying or carpentry. “Now I have a plan and I hope I can execute. I want to further myself in all areas possible.”

MALE AND FEMALE INMATES who circulated through the gymnasium for 45-minute intervals from 8:45 a.m. to 3:30 p.m seemed engaged and excited.

“Some people are ready for the change and they’ve chosen to be here,” said Ruxer. “It’s about self-sufficiency, so they grow into productive members of society.”

Spann, Sheppard and others are ready for their chance, armed with more information on what’s available to them.

“I’m very excited,” said Sheppard, “to see all the people here willing to help us get a fresh start.”