Residential/retail project will include 24 affordable units.

Just last week, the General Assembly unanimously passed a bill which, if signed by the governor, will give the City of Fairfax the ability to adopt an affordable housing ordinance.

The law wouldn’t take effect until July 1, and the City Council hasn’t officially crafted such an ordinance for Fairfax. But it at least set a precedent Feb. 24 when it made sure the Novus mixed-used project will offer 6 percent of its homes at 60 percent AMI (Area Median Income).

“The City is at a crossroads developmentally,” said Councilman David Meyer. “This project reflects smart-growth principles. To continue providing the amenities and services to our residents, growing our tax base is critical. And we should establish an affordable-housing policy of 6 percent at 60 percent AMI. I don’t believe a housing trust fund is viable for our community at this time.”

CALLING the Novus Fairfax Gateway development “a quality project and a good compromise,” Councilwoman Ellie Schmidt said, “We need to consider the housing needs of all our citizens. [The site now] is a blighted property that’s underperforming. This will give us a residential component we need there and an increased economic base.”

Councilman Michael DeMarco said the project helps Fairfax compete with other nearby areas redeveloping. But he believes the rent amounts people will have to pay at Novus, even at 60 percent AMI, will put them out of reach for the average person.

“Teachers, firefighters and police officers still can’t afford it,” he said. “So we need to do something bolder for them, as well as for senior citizens and college students.” DeMarco preferred Novus build just 4 percent affordable homes and make a cash proffer of $700,000 “to leverage into more funds toward rent relief for existing, market-rate housing. It could also help people renovate their properties and encourage others to develop affordable units.”

Councilwoman Nancy Loftus said she, too, would rather have the cash in hand, but she was glad the nonprofit CASA will receive free office space in the project and have increased visibility.

“This project has come a long way and I’m impressed with [Novus’s] other projects,” said Mayor Scott Silverthorne. “But it’s very large and I’m concerned about that. I commend the applicant’s incredible community outreach, and the economic development is a plus for the City. But we’re 32 [school children] away from it becoming a negative.”

“What worries me is that we have some unknowns here,” he continued. “The building height and the reduction in parking trouble me – and we’ll have parking problems there. This project could be a bit better; there are density, traffic-generation, building-height, size and scale issues. I’m happy about the 6 percent affordable housing, but I’d like to give this [whole project] more time to get even better.”

BUT THE MAYOR only gets to vote in the event of a tie, and the City Council voted 5-1 in favor of allowing Novus to build its project here. Councilman Jeff Greenfield was the lone, dissenting vote. Although he didn’t explain why during the Feb. 24 meeting, at an earlier work session he said it would be too many homes at a location where people couldn’t walk to restaurants, movies and grocery stores.

After the meeting ended, Silverthorne said he was pleased that, at least, “the bar has been raised” regarding affordable housing in the City. And he said the $200,000 contribution Novus will make to the local schools will be used toward alleviating “future school overcrowding.”

Fairfax — It is not a perfect project and not everyone got what they wanted. But it will be a vast improvement over what’s there now, and it includes some much-needed affordable housing.

Novus Fairfax Gateway LLC got the green light last Tuesday, Feb. 24, from the Fairfax City Council to transform part of the Kamp Washington triangle between Fairfax Boulevard and Lee Highway into a modern, community-serving, mixed-use project. 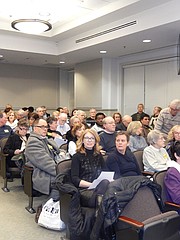 Attorney Lynne Strobel, representing Novus, explained, “We tried to balance the concerns of many people, while keeping the project economically viable.”

And indeed, an overflow crowd of City residents packed Council chambers to speak during last week’s public hearing before the Council took action. More than 70 belonged to VOICE (Virginians Organized for Interfaith Community Engagement), a coalition of faith organizations and nonprofits.

TODAY, the site is a car-storage lot for Ted Britt Ford. But when redeveloped, the commercial space and three- and four-story buildings will front on Lee Highway and Fairfax Boulevard. Five-story buildings will be centrally located and a seven-story parking garage will feature a half-story on top for a pool.

In response to citizen and Council wishes, 6 percent of the apartments will rent for 60 percent of AMI [Area Median Income] – roughly $65,000/year or less. These 24 units will be scattered throughout the development.

There will be a through street with a connection at the Bevan Drive signal at Fairfax Boulevard, plus a new, un-signalized entrance on Lee Highway. The development’s road network could correspond to the future redevelopment of the rest of the Kamp Washington triangle, while treating the section connecting Lee Highway to Fairfax Boulevard with several, traffic-calming elements to reduce cut-through traffic.

“We have three, distinct neighborhoods to create a sense of community,” said Strobel. “Retail frontage will be on the Lee Highway side and along Route 50. And the parking structure is completely surrounded by residential buildings. We’ll use high-quality materials, including masonry, in an urban streetscape, with attractive facades on all sides.”

There will be trails connecting to adjacent properties, plus open space including a 5,600-square-foot contemplative space next to the Jermantown Cemetery, and Novus will maintain this space and the cemetery. It will also display public art and will contribute $100,000 to Kutner and Westmore parks, $25,000 toward an area traffic study and $200,000 to the City schools.

Construction should begin in about a year and take some two years to complete. City Council eventually approved the rezoning, special-use permits, special exceptions and subdivision variances needed for this project – but not before a four-hour public hearing.

“In the last decade, luxury homes, condos and townhouses were built here,” said Lisa Whetzel, executive director of Our Daily Bread. “It’s good for the tax base, but is that all we care about? We also need affordable homes for people who work here.”

AN OPTION Novus had presented to the Council, instead of the 6 percent ADUs, was providing just 4 percent and contributing $700,000 to a City trust fund for affordable housing. But Whetzel said the City would have to maintain the fund and it would not be as valuable as the affordable homes.

“Are we a city that only values the affluent, or all our workers?” asked Whetzel. “Affordable homes provide a way for people to live and work here without assistance – this is a justice issue.”

Agreeing, Kevin Denton said it is “impossible to duplicate the number of units you’d lose for that amount of money.”

“A set-aside for affordable housing is beneficial to our city – it’s not charity,” said longtime resident Serena Mercer. “We’ll lose talented people – teachers, health-care workers, firefighters, police officers, students and senior citizens – if they can’t afford to live here. Retirees are also living below the median income; if we need to downsize, where would we go? Certainly not to a luxury townhouse.”

Vernon Tuniga liked the project’s sheltered parking, pedestrian walkways and bike racks, and Steve Caruso called it “well-suited and desirable” for Fairfax. He, too, urged Novus to “consider the working-class citizens – most of this won’t be affordable to the average person. We need to implement a reasonable percentage of affordable housing so everyone has the same opportunity to thrive.”

The Rev. Henry Brinton said the lack of such housing not only hurts the residents, but “the businesses, which won’t be able to hire the workers they need.”

Sue Lasley told how she came to Fairfax years ago as a single mother of two, found a place to live and made a good life. But she said today’s young people cannot afford to live here. “No one wants to see people living in their cars or asking for handouts on the streets,” added Oak Knolls resident Ann Donahue. “Affordable housing is the answer.”

Michael Cameron said the project will “revitalize an otherwise neglected area of the City.” And Tom Ross, with the Citizens for Smarter Growth, called it “the right project for the right time.”

Darcy Cunningham, executive director of Fairfax CASA (Court-Appointed Special Advocates) – which serves abused and neglected children involved in court cases – said CASA is grateful to be the nonprofit selected for the office space there. “The hardest part of my job is raising funds,” she said. “And not having to pay rent for 15 years [is worth] $1.5 million.”

However, Westmore’s Gary Perryman said the new development would generate more children than projected, and “they’re expensive to educate. You’re doing away with 8.33 acres that could be devoted to business use, which provides revenue to the City.”

“And 1.6 parking spaces per unit aren’t enough,” he added. “Couples live together and have two cars – and they’ll be parking in Westmore and other neighborhoods. Traffic from there will cut through our community to get to the other side of the City, and kids can’t play in the places they’re providing the open space. Don’t approve this.”

But City business-owner Curtis Shiver said it’s an “under-utilized property and this is the best proposal to redevelop it. It’ll improve both Fairfax’s economy and appearance.”