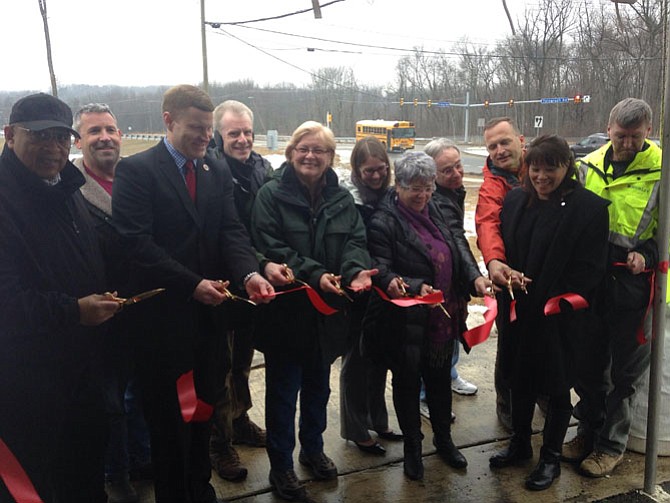 Though the morning of the ribbon-cutting was damp and chilly, Supervisor Jeff McKay (D-Lee) said he was thankful the ceremony was scheduled for Wednesday rather than Thursday.

The March 4 event marking the completion of the county-funded Telegraph Road widening project took place in the new Huntley Meadows Park parking lot at 6901 South Kings Highway in Alexandria, 24 hours before a winter storm dropped anywhere from 4 to 8 inches of snow around northern Virginia.

Prior to the widening, the intersections of South Van Dorn Street, Telegraph Road and South Kings Highway were among some of the worst bottlenecks in the county.

“This intersection has been a constant challenge for the commuters and park authority pedestrians,” said McKay.According to the county, the full complement of improvements includes widening Telegraph Road to 4 lanes from South Van Dorn Street to South Kings Highway, adding turn lanes at South Van Dorn Street and South Kings Highway and adding U-turn lanes for residential access on the south side of Telegraph Road.

In concert with the transportation improvements, the project also upgraded some of the Huntley Meadows Park infrastructure, including a new trail, sidewalk and three-arched bridge that replaced an outdated culvert.

“This is our crown jewel behind us,” McKay gestured to the park, “and the project only works if it works with the Park Authority.”

McKay made a point of explaining the effort was funded by Fairfax County, not the state of Virginia, with money secured several years ago. “It was either the county, or live without the improvement,” he said. The Park Authority and state Department of Transportation were involved, however, in executing the project.

Catherine Ledec, chairwoman of the Friends of Huntley Meadows Park, praised the new infrastructure, including improved water runoff management, that was part of the transportation project. “Speaking on behalf of our wildlife, thank you for protecting our home.”

Alexandria resident Bill McGeehan stopped by the ribbon-cutting and also expressed his excitement and gratitude over the project’s completion.

Any time of day, you might have to wait for a couple of lights,” said McGeehan, who lives nearby Huntley Meadows Park. “At 4 p.m., it could be backed up a mile.”