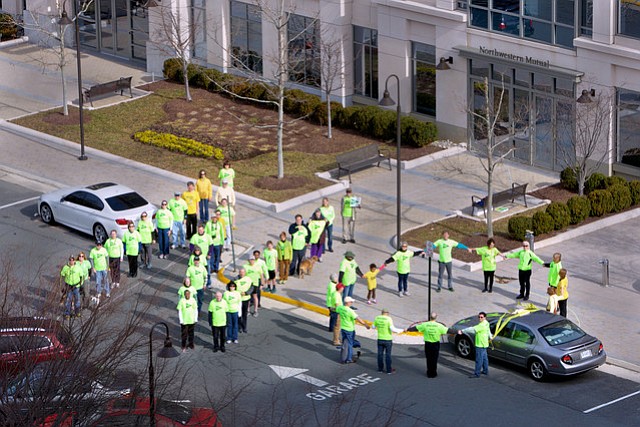 Forty-nine rescuers braved a windy morning on Sunday to gather in front of the Reston office of Northwestern Mutual to spell out the word NO. Rescue Reston President Connie Hartke told the group that if the Board of Zoning Appeals rules in favor of the County Zoning Administrator on April 15, it will be three strikes and NWM should accept the word “NO,” meaning no to residential development of the 166 acre recreational space across the street from where they stood.

Northwestern Mutual (NWM) is the majority owner of RN Golf Management, owner of Reston National Golf Course. Twice the Fairfax County Zoning Administrator has told NWM Attorneys that they cannot develop the golf course into townhomes or anything other than open recreational space. “It’s time they got the message,” said Hartke.

Hartke told supporters that the #1 action they can take between now and April 15 is getting more County residents to sign the online petition at bit.ly/RescueReston.

Reston resident and Hunter Mill District Supervisor Catherine Hudgins, wearing a Rescue Reston t-shirt, addressed the crowd: “. . . the proposed Comprehensive Plan language continues to support the use of the golf course as a golf course or open space. While this has been a long and intense process, I continue to support the Fairfax County Zoning Administrator’s determination.”

Virginia Delegate Ken Plum (D-36), also a Reston resident, had this to say: “Thanks to Rescue Reston volunteers for working so hard to preserve one of Reston’s very important assets—its open space. Your efforts are appreciated.”

Virginia Senator Janet Howell sent her regards with this message: “Rescue Reston is an important voice for preserving Reston ideals. We moved to Reston to live Robert Simon's vision. Protected open space is crucial to our shared vision. I commend Rescue Reston for its vigilance and determination.”