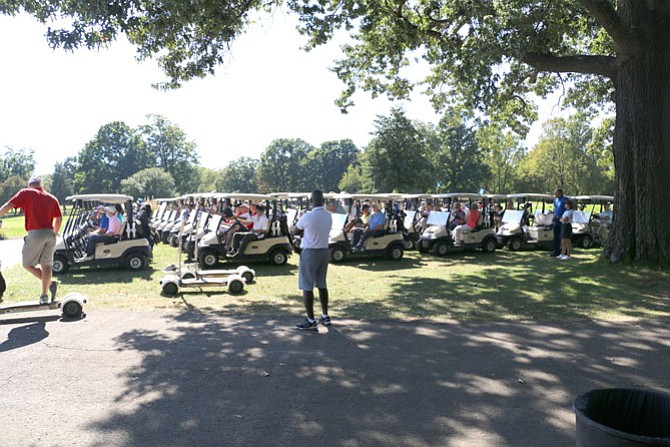 Tee Time: Golfers in teams of four line up in golf carts for a shotgun tee off at Reston National Golf Course on Monday, Oct. 2, for the Rescue Reston third Annual Golf Classic.

Reston — Restonians are getting ready to fight another battle, if necessary, to keep the

Rescue Reston Director and Co-Founder John Pinkman and his wife Ruth Ann Pinkman read off ticket numbers for the raffle during dinner, which was provided by the event’s food sponsor Glory Days Grill – Northpoint.

Reston National Golf Course the way it is.

Rescue Reston, the grassroots organization leading the resistance to the redevelopment of the Reston National, charged individual players $85 or a team of four players $340 to play in the classic. The fees covered golf balls, drink tickets, golf carts, green fees and dinner for the golfers.

The greatest benefit the golfers paid for was the opportunity to contribute towards helping Rescue Reston preserve open space in Reston, according to Connie Hartke, president of the organization.

“We just thanked everybody for the five years that we’ve been struggling to keep these guys employed out here on this golf course,” John Pinkman, Rescue Reston director and co-founder, said. “This event, 100 percent of the money

Golfers and dinner guests dined at Reston National’s outdoor patio and were served food that was provided by the event’s food sponsor Glory Days Grill – Northpoint.

goes directly to pay for legal representation over the past five years.”

Rescue Reston’s five-year legal bill to preserve the course was more than $153,000, of which the organization paid $132,500 before the fundraiser, according to Hartke.

THE COMMUNITY was invited to participate as golfers, hikers, volunteers, dinner-only guests or sponsor.

The Classic had a shotgun start at 2 p.m., where golfers teed off simultaneously from different holes. The golfers played nine holes under “Captain’s Choice” format, which is comparable to a “scramble” format but with four golfers per team. All golfers hit drives and compare results. The team moves their golf balls to where the best ball lies and repeat the process until the ball is in the hole.

Raffle tickets for prizes valued at $500 or more were on sale for $5 each or five for $20 at the clubhouse throughout the afternoon. Each ticket included a coupon for 20 percent off an entrée at Red’s Table restaurant on South Lakes Drive.

The classic also hosted a traditional nature walk at 3 p.m. that began at South Lakes Drive Park, which was led by Idalina Walker, naturalist at the Reston Association Walker Nature Center. She was assisted by Bill Burton who volunteers on the Audubon Society of Northern Virginia Board of Directors. They led 18 walkers on a two-hour hike along Reston paths that abut and crisscross the golf course, discussing the different forest habitats and water systems that populate the edges of the fairways, according to Hartke.

Fairfax Master Naturalist Robin Duska, who is also a member of the ASNV Board and member of the RA Environmental Advisory Committee, documented 13 species of birds during the two-hour walk, according to Hartke.

Rescue Reston members and supporters are worried the golf course and open space is under threat of development from the owners of the property.

This is misleading because any owner of the golf course would not have the right to develop the land into residential property by right.

“People are coming in wanting to put thousands and thousands of units of homes here,” Pinkman said.

RESCUE RESTON already fought about this with the golf course’s current owners and won.

Fairfax County designated the land for only recreational use. Any residential development plan for the property would require approval from the county’s Planning Commission and Board of Supervisors to rezone the property. This process requires multiple public hearings along the way, which is where the golf course owners have had a history of losing this battle with Restonians.

When Northwestern Mutual, the majority owner of RN Golf Management, which owns Reston National, tried to go around the process, the Fairfax County Zoning Administrator told Northwestern Mutual attorneys that they could not redevelop the golf course without rezoning approval. The attorneys then challenged the county in court, where they were told no again.

In November 2015, a judge ruled that the golf course owners would have to go through the county’s Planning Commission and Board of Supervisors to seek a land-use change to redevelop the property into anything other than open recreational space.

Months before this ruling, the county added another layer of complication that would make the process for redeveloping the property even more difficult.

The Fairfax County’s comprehensive plan for Reston — the Reston Master Plan Special Study — was amended and adopted by the Fairfax County Board of Supervisors on June 2, 2015. The amended version includes this provision: “The Reston National and Hidden Creek Country Club golf courses are planned for private recreation use, more specifically to remain as golf courses.”

“Northwestern Mutual is going to wake up,” Pinkman said. “They’re going to have to wake up and find out, ‘Listen, you are not going to sell this as commercial or residential property.’”

ARA did not respond to inquiries from the Connection about the sale of the property and Reston National General Manager Brian Simpson refused to comment.

“They do a wonderful job organizing the details of the tournament itself,” Hartke said of Billy Casper Golf, which manages the golf course. “The job was made easier with all of the help they provide.”

Rescue Reston is still tabulating the amount of money that was raised during the classic.

“Still, we are confident that it was a success,” Hartke said.