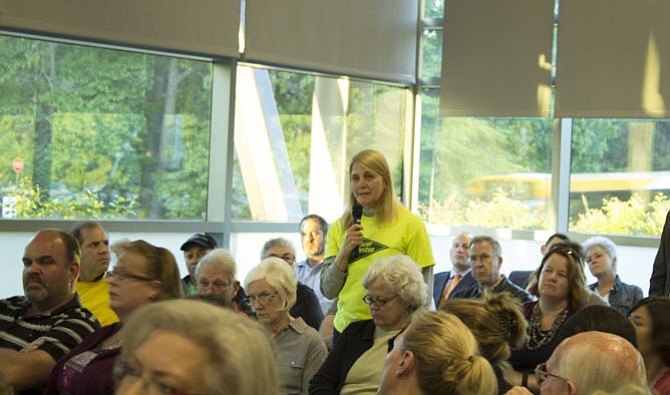 Connie Hartke, president of Rescue Reston, a grassroots organization that opposes the redevelopment of Reston National Golf Course, asserted on May 3 the need to warn bidders who wish to purchase the land, which is for sale, that they must maintain the land as a golf course. Photo by Fallon Forbush.

While some things will remain unchanged, the company intends to make major investments.

Fore Golf Services, the company that has been managing the golf course, will continue to do so. General Manager Eric Levin and his employees will also continue working at the club. Wheelock plans to immediately invest approximately $300,000 in upgrades to the property, including improvements to its Roanoke Grill, Tavern, lobby, Fairway Room and the locker rooms. New golf carts will also be delivered in December.

And this is only the beginning of what could change.

“Over the next several years, Wheelock will be working in partnership with the Reston community and club members to explore potential changes to the property that could provide the community with additional public amenities, civic spaces, enhanced environmental benefits and new housing choices,” Dusty Smith, a spokesperson for Wheelock, told the Connection over email.

While Wheelock has publicly expressed interest in residential uses for the property, it is not speculating on zoning changes.

“We intend to fully embrace the Reston process and have no preconceived notions of what direction this may take us,” Smith said.

Reston has a history of fighting such proposals in favor of preserving green and open space.

Fairfax County designated the land for both courses for recreational use only. Any residential development plan for the properties would require approval from the county’s Planning Commission and Board of Supervisors to rezone the properties. This process requires multiple public hearings along the way, which is where the Reston National owners have had a history of losing this battle with Restonians.

When Northwestern Mutual, the majority owner of RN Golf Management, which owns Reston National, tried to go around the process, the Fairfax County Zoning Administrator told Northwestern Mutual attorneys that they could not redevelop the golf course without rezoning approval. The attorneys then challenged the county in court, where they were told no again.

While the county’s comprehensive plan for Reston — the Reston Master Plan Special Study — states that “the Reston National and Hidden Creek Country Club golf courses are planned for private recreation use, more specifically to remain as golf courses,” Reston National was listed for sale by investment advisory firm ARA Newmark on Tuesday, Feb. 28. ARA listed the property as “168 acres of by-right residential development.”

This is misleading because any owner of the golf course would not have the right to develop the land into residential property by right.

While Rescue Reston is strongly opposed to how the owners of Reston National have approached development, it seems like the new owners of Hidden Creek have started off on good terms with the organization.

CONNIE HARTKE, president of Rescue Reston, released a statement to the Connection about the recent acquisition of Hidden Creek:

“There is a very sharp contrast in communications by Wheelock, the new owners of Hidden Creek CC, and Northwestern Mutual, the majority owner of Reston National Golf Course. Wheelock quickly introduces themselves, gives an overview of short-term and longer-term plans with promise of future discussions with club members and the Reston community. NWM makes every move through attorneys and to this day continues to search for a major housing developer through their broker ARA Newmark, the largest brokerage in the multihousing industry. Restonians are understandably concerned about what ‘new housing choices’ Wheelock is intending, but by following the county process for a comprehensive plan change, our community will have multiple opportunities to influence the outcome. Their openness so far certainly gives more hope that they will indeed be, as Dan Green says, ‘an engaged member of the community.’ We do not expect such an open communication to come from a purchaser of the golf course on the south side of Reston. We’ve certainly had no engagement from Northwestern Mutual. It is more important than ever that the community check in periodically on Rescue Reston’s website and social media pages to stay aware and ready for a call to action.”

Wheelock declined to provide information about the cost of the acquisition.