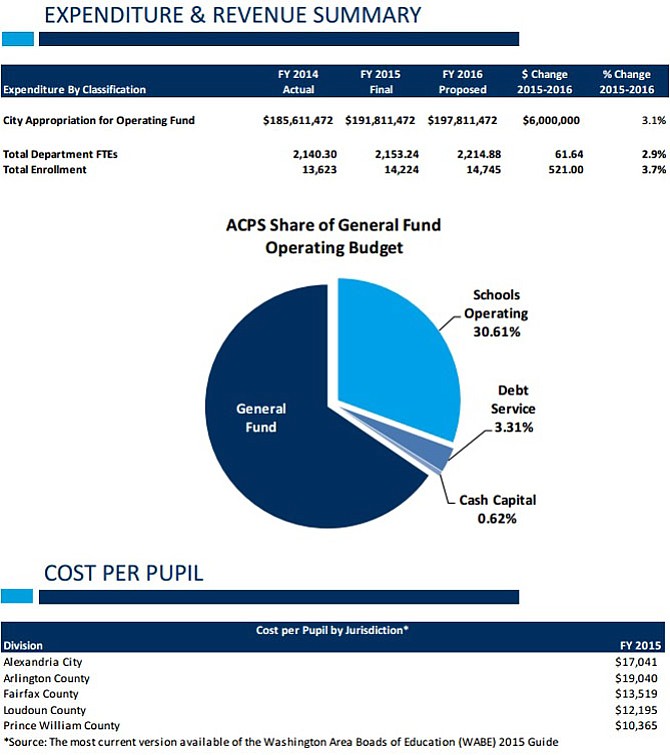 The deadline for proposing a tax rate increase for fiscal year 2016 passed on March 17 without any update from the city, meaning the funding in the current budget is all of the funding that will be available. For Alexandria police officers and city employees, that means a pay increase and additional career opportunities inside their departments. For Alexandria public schools, who were hoping a last minute decision to raise the tax rate might be enough to cover the $3 million gap between the school’s budget and the city manager’s proposed budget, the news means budget discussions between now and May are going to be tense.

Alexandria City Public Schools (ACPS) Superintendent Alvin Crawley requested $201 million from the city in his budget proposal. What he got was a $197.8 million budget from acting City Manager Mark Jinks — a $6 million, or 3 percent, increase over last year’s budget.

While ACPS and the city continue their ongoing collaboration, both sides have been tight lipped about the future of that gap. While the City Council and ACPS held a joint work session on Tuesday, March 17, at the March 24 City Council meeting Mayor William Euille added that there were other meetings happening behind closed doors where the budget resolution was being discussed.

“There was a meeting between myself, the acting City Manager [Jinks], [acting Deputy City Manager] Nelsie Birch, along with School Superintendent [Crawley], School Board Chair [Karen Graf], and their Chief Financial Officer [Stacey Johnson] at the superintendent’s office on Wednesday last week,” said Euille. “It was another follow up to the budget discussion reinforcing to them the challenges that we face … and hearing their side of the story, but encouraging them to take another look at their budget and narrow their gap. Suffice to say, there’s some level of confidence that we’ll get there like we have done in the past; we’ll just keep looking.”

For the Alexandria School Board, the city’s decision not to propose a tax rate increase limits the city and schools’ options for closing that gap.

“The decision to maintain the tax means the city has limited ways to close the gap between the city manager’s proposal and the school board’s budget,” said Chris Lewis, vice chairman of the Alexandria School Board. “We’re continuing to talk with them about ideas … The council will have to figure out where they can move funding around. That’s their decision. We talk about what our needs are and the decisions we make in terms of budget cuts.”

But according to the city, ACPS is facing the same tight budget as the rest of the departments.

“All budgets require difficult choices, particularly in a sluggish regional economy,” said Craig Fifer, director of communications for the City of Alexandria. “The city manager’s proposed budget did not include any tax rate increases. That substantially locks in new available revenue, forcing a balance between important spending needs in the areas of public safety, human services, public works, support services, and public education.”

“That three million increase is needed to refurbish and rebuild the schools,” said Herrington. Like other parents at the public hearing, Herrington said she supported a one percent real estate tax increase, but acknowledged it was unlikely in an election year.

So far, the School Board has been sticking to its argument that the schools have cut their budget as far back as they can.

“We have made cuts before you saw the budget,” said Graf. “Our teachers go in every day and work with, not only teaching these children, but providing some of the basic needs in food and clothing and emotional support that I think are absolutely necessary. This enrollment growth is real and it’s filling up our buildings. We’re attempting to meet the student and staff needs with the operating at the $9.2 [million increase].”

“It’s tough when your student population goes up and your funding per student goes down,” said Lewis.

However, the city says the argument that the $9.2 million is what’s needed to cover the enrollment increase contradicts early figured the schools gave them.

“City Council’s budget guidance to the city manager directed that he propose a transfer to ACPS of at least enough to meet the demands of increased enrollment,” said Fifer. “ACPS provided this figure as $4.6 million of new funding, and the city manager proposed $6.0 million, or 30 percent more than the guidance required. This $6.0 million represents approximately 55 percent of all new general fund revenue, and was the most the city manager could responsibly include while still meeting other funding needs. The $9 million of new funds that ACPS requested would have represented more than 80 percent of the city’s new revenue. In the end, while the proposed budget could not provide all the money ACPS requested, it did provide more than 98 percent of requested operating funds.”

With an approaching May 7 deadline for budget adoption and Add/Delete forms due on April 23, at the March 24 City Council meeting Councilman Paul Smedberg asked Jinks when the school budget crisis will be resolved.

“As soon as we get some agreement for you to consider,” said Jinks, “we’ll get that in front of you.”

Meanwhile, at the March 14 public hearing, police officers and city employees showed up to express their support for a 9 percent increase in starting pay for police officers, an upgrade for the lieutenant rank, and an across the board increase of 4.5 percent for all other sworn police positions. The budget also included a $4.6 million for a 2.3-5 merit based percent pay increase for city employees.

“It’s been increasingly difficult to tell people [interested in being a police officer in Alexandria] that this is where they should work,” said Diana Barrett, who has worked in the Alexandria police force for 10 years. “This will help retain a lot of highly qualified officers.”