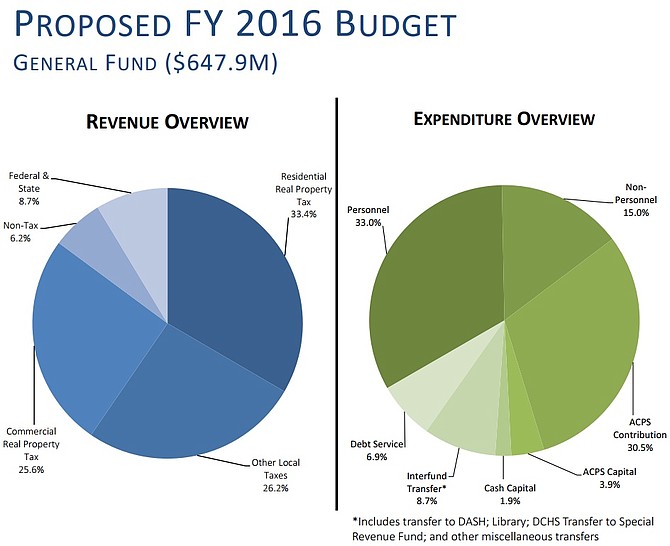 When Acting City Manager Mark Jinks presented Alexandria City Council with the $647.9 million proposed budget, the generally positive reception was tempered with the knowledge that many departments would not be receiving the funding they had requested. There was no feedback from the public or departments facing cuts at the City Council’s March 3 meeting, but it’s likely the city will face scrutiny from the public and within the city government before its May 7 approval.

In this year’s budget, each department prepared a budget submission based on its role in the City Council’s strategic plan, after which deputy city managers and the Office of Management and Budget worked with those departments to find options for reducing spending.

According to Jinks, the available funding for the city manager to spread around is still severely hampered by the effects of the recession. Job growth throughout the D.C. region has been very slow as the nation emerges from the recession. The city has experienced growth in the service industry, which is one of the lower pay professions, so it does little to help Alexandria’s tax revenue. Jinks noted that office vacancies remained high in Alexandria at 16.5 percent, but not as high as neighboring Crystal City, which makes attracting employers to those office spaces difficult with a more desperate neighbor to the north willing to undersell any agreement. Jinks said the low income job increase and the continuing high office vacancy is particularly damaging with ongoing federal cutbacks.

One resized capital projects would have involved reconfiguring the intersection of Quaker Lane and Braddock Road, originally a project with an expected price tag between $7 and $8 million. Instead, the city plans to change the signalization at the intersection to clarify the traffic flow, a $2 million project.

The city is also altering its relationship with contractors. Whereas the city had formerly hired contractors for smaller roadwork and worked in-house for all larger repairs, the current plan is to change that so that the city works the smaller, more frequent projects and contracts our work on larger road work projects. Additionally, Jinks said the city will save funding by having the upcoming development of the storm sewer basin also done “in-house.”

These are little changes to the budget system, changes that Jinks says the city cannot continue to rely on to help them through the budget processes in the future.

The average single family homeowner in Alexandria can expect a $21.5 monthly increase in his property tax, while the average increase across all homes in Alexandria is nearly $17 per month.

One of the more contentious aspects of the budget is the funding to Alexandria’s public schools. Jinks’ proposed budget includes a transfer of $197.8 million to Alexandria City Public Schools, a $6 million or 3.1 percent increase over current funding, but it’s $3 million shy of the $201 million budget approved by the Alexandria City School Board.

“Funding less than the requested amount would impact our ability to have a highly effective teacher in every classroom, provide necessary specialized instruction and support the needs of diverse learners,” said Alexandria Superintendent Alvin Crawley in a Feb. 26 press release.

The transfer represents 55 percent of all new General Fund revenue and 41.3 percent of the of the total budget. In Jinks’ proposed budget, Alexandria schools receive more percent of the budget than neighboring Arlington schools at 39 percent, but less than the 52.8 percent Fairfax County designates to its schools.

Lewis also expressed disapproval of the City Manager Office’s very different view of how school CIP funding should evolve. From 2016 to 2020, the ACPS CIP is $88.2 million above the city’s proposed CIP. From 2021 to 2025, the city’s proposed CIP is $73.7 million above the ACPS budget. Essentially, the ACPS wants to utilize most of the CIP funding within the first the first four years while the city is hoping to spread the project funding out over the next 10 years, with an emphasis on the last three.

“WMATA, their decisions and choices are creeping in to what we want to do locally,” said City Councilman John Chapman. “We need to have discussions on that, moving forward.”

Current WMATA plans include making sure every train on the metro has eight cars. The proposed budget included WMATA’s over $4 million funding request, bringing the proposed total to $35 million.

“If we’re going to pay for this, we should have more trains, more often,” said Vice Mayor Allison Silberberg, noting the long delays and packed trains common on Alexandria’s blue metro line. “It’s unbelievable in the morning and evenings.”

While the School Board may be unhappy about lack of full funding, other departments won what they have been fighting to get for years. Alexandria Police will receive a 4.5 percent pay increase for all sworn officers. The budget includes a 5 percent pay increase for police officer and lieutenant positions, as well as funding for career ladder programs for employees to grow within the departments, a reflection of concerns by the City Council that many recruits join the Alexandria Police Department for training and then leave for other, higher paying departments. The career ladder programs and pay increase are coupled with a 9 percent increase in police officer entry pay, so the new police recruits drawn to Alexandria will find advancement opportunities within the department.

“It’s pennywise and pound foolish to hire people who aren’t just staying with us, and we lose all that money in training,” said Councilwoman Del Pepper. “I think that particular situation is addressed and we will all be better for it.”

“The days of blanket, across the board pay increases are a structure of the past,” said Jinks. “Our challenge is to create pay scales that move us towards being in the average of our five comparative districts. For general employees, that’s where we are. For police we were at the bottom of the region.”

Speaking specifically on the budget’s increase in the ambulance fee to reflect Fairfax’s rate, Jinks said that several years ago Alexandria had established a set emergency services rate with Fairfax and Arlington to make the costs uniform across the region. However, since that time, both Fairfax and Arlington had independently raised their rates. The Basic Life Support rate is increased from $400 to $500. Advanced Life Support is increased from $500 to $650, and $675 to $800 for more intense cases. Jinks also noted that the payment of ambulance services was worked out after the fact, possibly to prevent the medical emergency from being compounded by a heart attack at the ambulance cost.

One of the developments of the County Manager’s budget Jinks personally lamented was the funding cut to Alexandria’s Law Library, from $116,808 down to an unsustainable $54,346. According to the budget, this reflects the end of the city’s General Fund contribution to the library’s operations. In the short-term, this forces the library to reduce the facility's operating hours and access to it’s collections. If the budget is passed, the Law Library Board will have to determine a new operating structure.

The next major development for the proposed budget is a work session on March 12, followed by a public hearing on March 16 at 4 p.m. at City Council chambers.