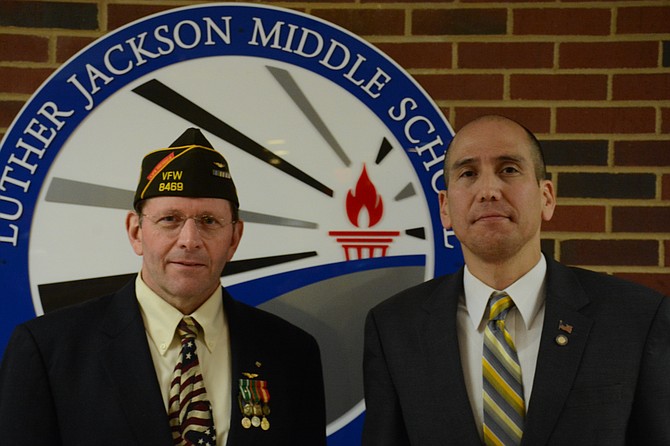 Springfield District school board representative Elizabeth Schultz (right) introduced an ultimately unsuccessful amendment to the 2015-2016 calendar that would have made Nov. 11 a school holiday in honor of Veterans Day.

Fairfax Station resident Steven Hunt, retired U.S. Navy, put it bluntly: “Votes count, words don’t.” That was following a vote in which all but two members of the Fairfax County School Board voted against an amendment to the 2015-2016 calendar that would have made Veterans Day a school holiday.

Hunt and Steve Martinez of Fairfax, recently retired from the Air Force, spoke before the School Board in favor of the amendment at the board’s March 26 meeting.

“Our nation realizes veterans deserve recognition and has set aside a day specifically to do just that, the eleventh of November, always the eleventh,” Hunt said in his remarks. “This should not be just another school day.”

Martinez, who moved to Northern Virginia in 2010, said he was “shocked” that Fairfax County would be “contradicting state and federal law.”

The amendment, proposed by Springfield District representative Elizabeth Schultz, would have given students the day off on Nov. 11, as well as shifted a teacher work day from the end of the school year in June to the beginning in late August.

Shifting the schedule to accommodate these changes, Schultz said, would even out the number of days in each quarter in a year that starts unusually late due to how Labor Day falls.

But the more emotional case from Schultz came in asking why veterans weren’t honored with a day off from school the way Rev. Dr. Martin Luther King Jr and presidents are.

Martinez made the same point in his remarks, saying “It sends a very negative message to our students that it is not as important as other holidays, such as Columbus Day or Washington’s Birthday, and therefore should be corrected immediately.”

But other board members argued students had plenty of opportunities to learn about and respect veterans in a structured way. They gave examples of schools around the county organizing large, well-attended celebrations and remembrances that both educated students on the meaning of Veterans Day and involved more military parents and other veterans that had the day off themselves.

“I’ve seen the power of this in the classroom,” said Mount Vernon representative Dan Storck. “I see and hear frequently from parents and students about what they’ve learned that day, the benefit they receive from having veterans come in there, how it makes it easier for them to do that.”

Others opposed to the amendment called it “impractical” to re-arrange the calendar at this point and that the month of November is already fairly jagged in terms of days off school.

“It doesn’t work for attendance,” said Sully District representative Kathy Smith. “We need to have more continuity of instruction in November.”

Braddock District representative Megan McLaughlin, who supported the amendment, wasn’t convinced from her stance. “Why do surrounding jurisdictions honor this federal and state holiday and we don’t?” she said. “Is it that we think we’re doing it better, the Fairfax way, that somehow everyone else just doesn’t get it?”

Schultz reminded the board that the calendar had not been published, and though it was scheduled to be voted on at a meeting at the beginning of March that was canceled due to snow, it was “exactly” the time to make needed changes.

Steve Hunt agreed: “If it’s too far along,” he said, “then why are they here?”

Schultz’s amendment was ultimately voted down; the original calendar motion passed with all members but Schultz and McLaughlin voting yes.