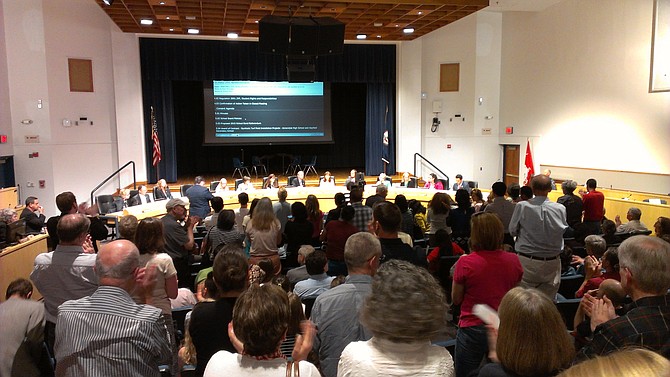 But as the board convened to take action on adding the words “gender identity” to its nondiscrimination policy, there was significant, emotional discord in the audience and among several board members as to how the board had arrived at making this decision and what implementation of the policy update would ultimately look like.

Though signs and banners are typically allowed inside the school’s auditorium during School Board business meetings, additional security at the May 7 meeting prohibited those with signs from entering. Dozens of citizens therefore crowded around the open doors to the auditorium and periodically vocalized their opinions.

In November, the School Board voted to add sexual orientation to the list of categories for which a Fairfax County student, employee or applicant for employment should not be discriminated against. That list also includes age, race, color, sex, religion, national origin, marital status or disability.

At-large member Ryan McElveen introduced the gender identity update to the policy at a forum in March of this year. Then it came up as new business at the board’s April 23 regular meeting and was scheduled for a vote on May 7.

McElveen gave several reasons justifying the motion, beginning with a March opinion by Virginia Attorney General Mark Herring that local school boards do have authority under Virginia law to make such decisions.

Regarding the protection of transgender students and employees, he said, “The truth is we already do, but that protection has never been clearly outlined in our policies.”

Several public speakers at the beginning of the meeting voiced concerns that this policy change would make bathrooms and locker rooms unsafe by allowing members of one biological gender to use the opposite facility.

“No student, employee, or applicant for employment in the Fairfax County Public Schools shall, on the basis of age, race, color, sex, sexual orientation, gender identity, religion, national origin, marital status, or disability, be excluded from participation in, be denied the benefits of, or be subjected to discrimination under any education program or activity, as required by law. It is the express intent of the School Board that every policy, practice, and procedure shall conform to all applicable requirements of federal and state law.”

“No decisions have yet been made regarding accommodations that will be provided, under the new policy. FCPS will hire a consultant to assist in developing appropriate regulations that protect the rights of all students and to comply with state and federal law.”

“Fears about this policy change are unfounded and need to be better understood,” McElveen said. “After we pass this policy tonight, nothing will change in how we handle cases of transgender and gender nonconforming students and employees.”

McElveen added that students and employees will continue to go through a thorough vetting process with regards to any gender-nonconformity, and that the board has “never received a concern regarding a bathroom incident of this nature.”

Another justification raised by McElveen was the board is being compelled by the U.S. Department of Education office of civil rights to amend its policy as part of a national gender identity protection rollout. “In this light, amending is non-negotiable,” he said, “unless we want the government to come after our federal funding.”

NOT ALL BOARD members agreed with that interpretation, however.

“Is my federal government really threatening me, as a duly elected local official who has sworn an oath to the constitution of Virginia to run this school system, to do their bidding by inserting ‘gender identity’ or face taking our children’s lunch money?”

Schultz also voiced concerns that the board had not taken sufficient time to fully examine how it would implement the policy update and what the effects would be, both for staff workload and cost to the school system.

She motioned to postpone action on the policy until October, “so that the board can be provided the commensurate draft regulation and handbook language, and determine the overall impact of the proposed revision to Policy 1450.”

“This is about whether our board is being responsible or foolhardy,” she said. “Frankly the process we’ve used to get to this point is troubling and embarrassing — so many fundamental questions that remain unanswered.

The board members, Reed continued, “clearly have caught the public by surprise and not done justice to our established public engagement process.”

Ultimately, Schultz and Reed were outvoted and the action moved forward, amid spontaneous outbursts from an increasingly boisterous audience.

The board finally voted 10-1 in favor of updating the policy to include “gender identity.” Schultz was the only dissenting vote, with Reed abstaining. 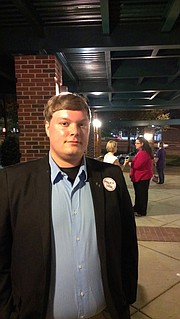 Devon Flynn, a George Mason University junior from Centreville, came to the board meeting protesting the adoption of Policy 1450: adding "gender identity" to the school district’s nondiscrimination policy.

IN CHAIRMAN Tammy Derenak Kaufax’s statement regarding the decision, she said, “No decisions have yet been made regarding accommodations that will be provided under the revised policy. Our next step will be to hire a consultant to assist in developing appropriate regulations that protect the rights of all students and comply with state and federal law.”

Following the vote, citizens began filing out of the auditorium and lingered in the lobby and covered area leading into the school.

Josh Israel of Fairfax was one of the public speakers before the School Board, in support of the update. “This policy sends an important signal to all our teachers, staff and students — particularly those who are transgender — that they need not be afraid,” he said in his remarks.

After the vote, Israel said, “They demonstrated they understand the importance of including everyone.”

In response to Schultz’s comments during the meeting that Fairfax County policy should instead simply read “Don’t discriminate,” Israel said, “It still has to mean something; until these are enumerated, there isn’t any enforcement. It’s encouraging that 10 School Board members recognized that tonight.”

Devon Flynn of Centreville is a junior at George Mason University. He came out against the proposition. “I was hoping with the majority here opposing it, the board would see and respond to our opinions,” he said.

One big issue for Flynn is the “federal one size fits all” aspect of the policy update. “They have no place to tell a county, a school district,” what to do, he said. Another concern for him is bathrooms and locker rooms: Flynn said he would move his future children to another county if students are allowed to use facilities designated for the opposite sex.

Dalia Palchik, an Annandale resident and teacher at Sheridan School in Washington, D.C. supports the policy update. “As a teacher, I’ve seen kids struggle,” she said afterwards. “It’s time we do everything we can to help everyone, including the most vulnerable.” Palchik is also running to represent Providence District on the School Board.

John Thom of Fairfax came to the meeting to get a sense of what was happening and how the public was feeling. “I didn’t see a need to change the policy, and why this inexplicable rush to pass it without analysis?”

“Proper deliberation is what I hear people asking for — did they collect all the information and have a substantial debate?”

THESE QUESTIONS were answered by School Board vice chairman Ted Velkoff: “The reason we that haven’t had a full-blown community engagement about this policy is because, frankly, nothing is changing,” he said during the meeting.

“The notion that outside agitators promote, that this policy change will cause a sudden massive upheaval, is not true,” Velkoff continued. “The proof is that we have been dealing with transgender persons in FCPS and none of these catastrophic consequences has ever materialized.”

Student representative to the School Board Harris LaTeef refrained from weighing in on the motion, other than to say the majority of students he talked to supported changing the policy. The Langley High School senior did, however, implore the audience for something else:

“Come budget time next year I want to see this passion, this vigor, this community involvement when it comes to funding our schools,” he said. “That is a true threat to our children, our community, the underfunding of our schools.”