Lift Me Up Celebrates its 40th Anniversary in Great Falls
Votes

Lift Me Up Celebrates its 40th Anniversary in Great Falls 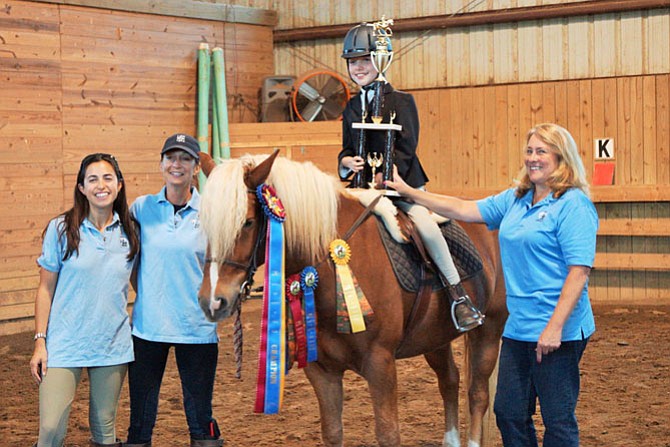 Sarah Wickman was Grand Champion of last year's therapeutic riding horse show in Lexington and a rider at Lift Me Up! in Great Falls. Photo contributed by Lisa Wickman

"Great Falls has changed a lot since 1975, but Lift Me Up! has been a constant, thanks to founder Colleen Zanin and longtime Great Falls resident Flo Dougherty.

After reading an article in T​he Chronicle of the Horse​ during her last semester in college, Zanin knew what good horses could bring to people with special needs," according to Laura W. Smith, of Lift Me Up!

"Zanin has a bachelor’s degree in Child Development and studied riding in England. She was certified by John Davies as a therapeutic riding instructor at a time when therapeutic riding was brand new in the United States but was popular in England particularly with assisting injured soldiers in their recovery.

"In 1975, Zanin, then 23, founded the Old Dominion School of Therapeutic Horsemanship (ODSOTH) at Deerfield Horse Center (which became Great Falls Equestrian Center and is currently Stoneridge Stable) in Great Falls. With just a few horses, riders and a handful of volunteers, the program was in motion. (The name ODSOTH was later changed to Lift Me Up!)

“The early success of Lift Me Up! is also credited to one of the very first volunteers, lifelong Great Falls resident and equestrian Flo Dougherty. Dougherty’s family owned a farm in Great Falls since 1869 and originally comprised 200 acres extending from Innsbruck Road to Ad Hoc Road, adjacent to Cornwell Farm. Dougherty and Zanin developed a friendship and became roommates residing on the farm until both women married in 1978.

"For the next three decades the program flourished and offered classes in the ring on Dougherty’s property off the Georgetown Pike and the Madeira School in the evenings and weekends to accommodate work and school schedules of riders, instructors and volunteers.

“Zanin later became a certified Occupational Therapist at the University of Pennsylvania where she also earned a masters degree in Special Education. These new credentials led to the inception of “Hippotherapy” at Lift Me Up in 1987. Zanin was among fifteen therapists to travel to Germany to study a new specialized equine assisted therapy. Hippotherapy engages the movement of the horse with therapeutic goals (not necessarily riding skills) to help their patients reach new milestones related to fine and gross motor skills as well as speech.

"Between Lift Me Up and her full and part-time positions as an Occupational Therapist with Fairfax County Public Schools for seventeen years, Zanin was very busy. Zanin was one of the founding members of the Therapeutic Riding Association of Virginia where she helped others initiate other riding centers and establish best practices in the therapeutic riding industry and taught others how to become instructors and therapists in this special field."

Supervisor John Foust and the Board of Supervisors will present a proclamation to Lift Me Up! for 40 years of service to the community on April 7.

And in November, the Great Falls organization will hold its annual gala.

Camron Saba practices five days a week, three hours a day, as do most high school athletes. But he has not forgotten his first sport, riding.

Camron's entire family rides, his mother, his father, and his sister. By the time he was 2 years old, Camron's physical therapist recommended Lift Me Up!, a therapeutic riding center located in Great Falls.

"We believe in the benefits of riding. He tried it and loved it," said Debi Saba, Camron's mother. "It was something he took to right away. He enjoyed being out of a wheelchair. He enjoyed the sense of freedom."

And riding helped Camron's strength and development. "Physically, his core got stronger, his legs got stronger, overall it made him a stronger person," she said.

Thirteen years later, he made the crew team, passing proficiency requirements such as swimming 100 yards and treading water while wearing jeans and sneakers that could have weighed him down. "It's so emotional, I'm going to tear up, I was so ecstatic for him," said Debi Saba.

ALONG THE WAY, with the help of numerous therapies, volunteers, horses and professionals, her son also had the attitude that helped him progress. "He is charismatic and has such perseverance," said Debi Saba. "My husband and I are always in awe with his ability to bounce back. He never asks, 'Why am I like this? Why me?'"

Camron, who loves trotting, already has his next goal in sight, galloping. "Sometimes I go slow, sometimes I go fast," he said.

"When they told her she won, it was so emotional. I don't think she thought she could win. It was so sweet, she was so proud," said her mother Lisa Wickman.

The trophy now shines in the family living room, "we have a horse theme," said Wickman, while ribbons Sarah has won decorate her own bedroom.

Sarah brought her trophy to school. Most everyone was a little envious. "Soccer trophies are a little bit smaller," said Wickman.

Even when they go to the grocery store, Wickman said people recognize her daughter, not necessarily her.

"Sarah was in such a good place. People knew what she needed and what she didn't need. They feel like family to us, they treat Sarah like family," said Wickman. "They challenge Sarah, and that is so important. They are in tune to what Sarah needs."

The fourth-grader at Sunrise Valley Elementary in Reston has arthrogryposis.

"She has an extreme amount of patience. She's tenacious," said Wickman. "A portion is God-given and the rest is tenacity, working toward that goal."

Sarah doesn't need her mother's help in the ring or in the fields. "This is Sarah's thing. At the end of a lesson, she'll say, 'Why did you stick around?’" Lisa Wickman said.

Lift Me Up has provided thousands of therapeutic horseback riding lessons to children and adults with disabilities at its Great Falls stable since 1975.

This year, Lift Me Up celebrates its 40th anniversary and will be honored by the Board of Supervisors and Supervisor John Foust on April 7.

Lift Me Up trains volunteers age 14 and older to assist with the therapeutic riding lessons as sidewalkers and leaders. Volunteers donated nearly 10,000 hours of service to help riders each year.

"This is a very special equestrian program that engages the best of humanity with extraordinary horses to provide a healing experience for those in our community who are most challenged," said Laura W. Smith, director of development with Lift Me Up.

Lift Me Up recently launched a new program for injured veterans called BITS (Back in the Saddle).

AND THIS PAST WEEK, Life Me Up got its own lift, literally, by installing a lift to help riders on to the horses.

Jenny Burke drove by Lift Me Up and wondered if the therapeutic riding program recommended by her son's physical therapist could help.

"He would sit on the horse on a blanket and they'd tie a bolster pillow onto the horse. Sometimes, he would even fall asleep, he was so comfortable," Burke said.

"He progressed to sitting on a saddle on his own. It has done so much for his balance and his core development."

A rare genetic seizure disorder repeatedly robs her son Alex of muscle and core ability. After a lengthy hospitalization, Alex is back to lying on the horse with the bolster pillow but volunteers and the horses help the ways they can.

"There's always somebody who knew him from the beginning. They know the best way. They say, 'Let's try this, Let's try that,'" said Burke. "Even the horses help.They are amazing animals. They can sense when he is off kilter. They are very intuitive."

"There are so many different therapies you can do. This has been the best use of our time and energy," said Burke. "I take every opportunity I can to tell people about it."

Camron Saba does the same. "The sport is totally safe, and the kids can get up on the horse any time. I would say, 'Try it. And if you like it, you'll stay."

"It has enriched our lives and I'm so grateful," said Wickman. "Come and see. Come surprise yourself. They will try just about anything to get a child on a horse."