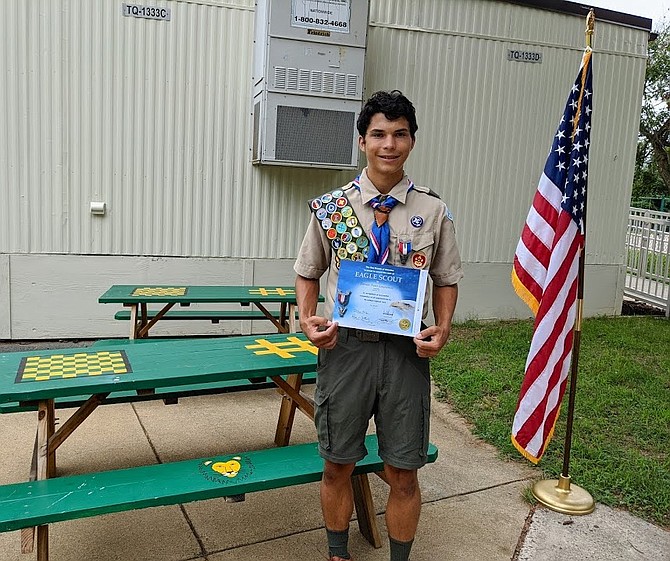 To earn the Eagle, the Scout must plan, and show leadership in accomplishing an “Eagle Scout Service Project”. The project must be approved by the Boy Scout Council before the actual work can begin, and the project must be deemed as “benefiting the community”.

Steven’s project was building and painting picnic tables for Kent Gardens Elementary School. As a former member of the Chess Club at Kent Gardens, he decided to paint chess boards and tic-tac-toe boards on each table so that children could enjoy playing outdoors.

Steven is just one of the growing list of Scouts with Troop 869 who has earned their Eagle rank, the highest award in the Boys Scouts of America organization. The Eagle award is truly a mark of distinction, as only between 3 – 4 percent of all youth who join BSA achieve the honor. Many businesses, corporations pay close attention to resumes in hiring, and all branches of the military give preference to Eagle Scouts with an automatic higher pay grade upon successfully graduating from basic training boot camps.

One of the essentials to earning the Eagle seems to be perseverance. A Scout must rise through the ranks, starting out as a “Tenderfoot,” then progressing to 2nd Class, then 1st Class ranks. From there, a Scout must earn the Star rank, then Life rank. Each rank requires meeting many skill levels in Scouting, as well as accepting and performing leadership skills within the troop. Once the Scout achieves Life rank, they are finally eligible to start planning to earn their Eagle. Steven persevered and overcame delays due to COVID in order to finally achieve his Eagle rank.

One of Steven's most memorable scouting experiences was High Adventure Camp at Summit Bechtel Reserve in West Virginia. After plans to attend Philmont Scout Ranch were cancelled due to the forest fires, troop leaders were able to provide an equal if not more exciting summer experience to the scouts. Scoutmaster Streinrauf noted, "Steven hiked more miles at SBR than he would have at Philmont."

During Steven's COVID-friendly Eagle Court of Honor, fellow Eagle Scout Kevin Lu served as Master of Ceremonies and Scoutmaster Bob Steinrauf led the Eagle Charge and placed the Eagle neckerchief over Steven’s shoulders during the ceremony. Followed by Steven’s mother, Christiane Lourenco, who pinned the cherished Eagle medal on his uniform. Steven spoke briefly and presented pins to his mother and father, Severin Lourenco. He presented the Eagle Scout Mentor’s Pin in absentia to former Troop Scoutmaster Jim Thomas. He also presented the Eagle Scout grandparent pin to his grandmother who was present, Fatima Neto.

That same weekend Steven was dropped off at the Virginia Military Institute where he begins his next chapter playing D1 soccer and working towards a computer science degree as an Army ROTC Cadet. His twin sister, Jessica Lourenco, will be attending UMW to earn a degree in Elementary Education.