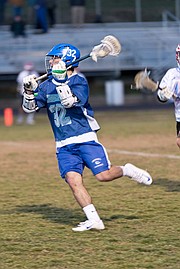 Louis Dubick, seen earlier this season, and the Churchill boys’ lacrosse team will face Quince Orchard in the 4A/3A West region championship game at 7 p.m. on Wednesday, May 13 at Churchill High School.

The Bulldogs, who beat Whitman 12-3 during the regular season, edged the Vikings 12-11 in double overtime on Monday during the 4A/3A West semifinals at Churchill High School.

Churchill advances to the region championship game for the fourth consecutive season. The Bulldogs (15-1) will host Quince Orchard (14-2) at 7 p.m. on Wednesday, May 13.

The Bulldogs defeated Quince Orchard 14-10 in the regular-season finale.

Quince Orchard defeated Wootton 10-9 in the other semifinal contest on Monday.

Whitman and Wootton will face off in the 4A/3A West region championship game at 6 p.m. on Monday, May 13, at Whitman High School.

The Whitman baseball team defeated Bethesda-Chevy Chase 10-4on Monday in the 4A West quarterfinals on Monday. The Vikings will travel to face top-seeded Montgomery Blair at 7 p.m. on Wednesday, May 13, in the semifinals.