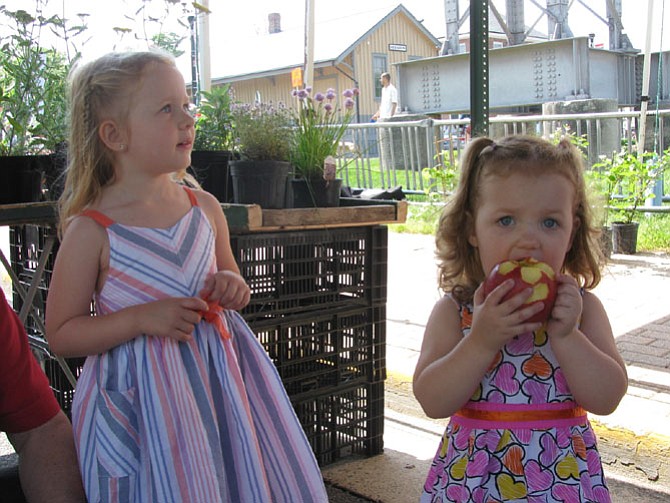 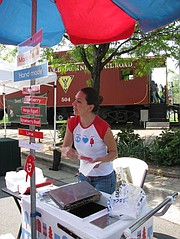 Maria Romano is in her fourth year as a vendor, which started out as a side business. "Now I'm doing it full time," she said. 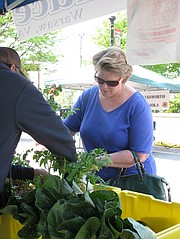 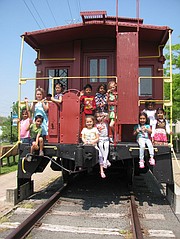 Teachers from the First Baptist Church of Herndon Pre-School, take their class to the farmer’s market to teach the children about healthy food.

"Guacamole was out early," said Esther Corporan, whose brother in law is Chef Eloy Carrera, who makes six kinds of fresh salsas for Herndon's Farmers Market on Thursday mornings.

Julie Frederickson, of Herndon, will bring home the tomato plant that she bought from Hutt Produce at the Herndon Farmers Market. She'll plant it "for Mother's Day," she said.

Meanwhile Alexandra Miller has no intention of planting an apple tree. She immediately takes a bite from her fresh apple from McCleaf's Orchards.

"Every week," said her mother, Rebecca "Becky" Miller, of Oak Hill. "She starts with a cookie from Sweet Thang, then she'll put it down when she finds the biggest apple to eat."

Grandfather Tom Miller is in town from Nevada, so when the farmers market closes Thursday at 12:30 the family is on its way to the restaurant of the girls’ choice.

TEACHER Mallika Joseph and her assistant teacher Marima Page, from the First Baptist Church of Herndon Pre-School, took their class to the market "so they can learn about fruits and vegetables and what's healthy for them," said Joseph.

In between playing, they like hopping on the Washington & Old Dominion Railroad caboose.

On a popsicle, too.

Daniela Vasquez treated her sons Liam Vasquez, 2, and Dariel Vasquez, 4, to a fruit pop from Whimpop. "I wasn't going to get it for them, but when they told me it was all natural and healthy, I decided to get it. Organic and fresh produce. I'm up for that."

Maria Romano, creator of Whimpop, is in her fourth year as a vendor, which started out as a side business. "Now I'm doing it full time," she said.

"Some children tell their parents, 'Mom, it tastes like strawberry.' When they try something real, they are surprised. They're so used to artificial ingredients," she said.

She sells 17 different flavors, some without sugar, some with, but all with natural ingredients and fresh produce she buys from farmers at the markets.

Laura Wigglesworth is selling her freshly made granola for the first time at a farmers market.

"First time, first day, first month. This is it. I love to cook. I’d cook all day long," she said. "I am a big farmer market shopper. I love to go."

If Brooklyn Holley is an accurate judge, then Wigglesworth will enjoy some success this season.

Lori Connolly, from Mt. Olympus Farm, owned by Mary and Kenny West, tell the history of their farm and expanding success as they sell fresh strawberries and an assortment of produce.

"It started out as a blueberry patch and has expanded," said Lori Connolly.

FARMER AND OWNER James Bourne, another vendor, has farmed on land that has been owned and farmed by his family since 1690. Bourne received the 2010 Calvert County Sustainable Farmer of the Year award and awards for his efforts in education and sustainability in forestry conservation. He raises grass-fed beef, pork and lamb and free range poultry products that include eggs, chicken and turkeys in addition to more than three dozen different vegetables without needing pesticides.

Alan Smith says he has never had a bad day working the Farmers Market. In fact, he said, "It's really an American dream for a father and son to work together."

He said his son Matthias did all the work, he's just hired help.

“He said, ‘I'm going to need some help, are you willing?’ Most of the time, it would go to a best friend or the girlfriend. That he asked his dad to help, it's made me feel humble, like I've done something right."