Dingle’s background in diversity education and a faculty standoff.

When students at T.C. Williams High School get called into the principal’s office next school year, they will find a new face on the other side of the desk. On May 4, Alexandria City Public Schools Superintendent Alvin Crawley announced that Dr. Jesse Dingle would replace Suzanne Maxey, who is retiring at the end of the 2014-2015 school year, as principal of T.C. Williams High School.

As principal, Dingle said his primary goals are increasing students’ academic achievement and growing the school’s International Academy, a program designed to prepare recent immigrants for college and careers. Most importantly, Dingle said he wants to meet with the school’s faculty and get a first hand perspective before making any permanent plans. 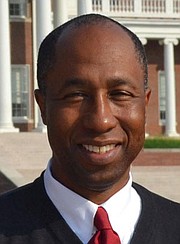 “T.C. Williams is a much larger school, but I don’t care who you are, you cannot run any [high school] by yourself,” said Dingle. “It has to be a team approach, from your administrative team down to the custodial staff. You need to set a tone and a vision for how students are going to learn.”

But this team approach hasn’t always been painless. At Chapel Hill High School, Dingle clashed with members of the faculty and staff of the school, ultimately resulting in two teachers being involuntarily moved to another school shortly before Dingle’s departure.

Albert Wartski had taught at Chapel Hill High School before he was one of the two teachers involuntarily moved following conflicts with Dingle.

“Dr. Dingle didn’t have a leadership style, he really wasn’t very much of a leader at all,” said Wartski. “He didn’t have a very good control of the faculty. We wanted to do some things with underrepresented students, and he didn’t lead or do anything, and it led to a low morale.”

“It has to be a team approach, from your administrative team down to the custodial staff. You need to set a tone and a vision for how students are going to learn.”

A group of 40 teachers wrote and signed a letter to Thomas Forcella, the superintendent of Chapel Hill-Carrboro Schools, referencing situations where it was alleged that Dingle repeatedly undermined decisions made by the teachers. The teachers said Dingle wrote letters to colleges for students saying that student’s grades were not reflective of their academic performance.

“We can’t trust our principal to support us or to make good decisions on his own. We would like to have a strong leader who is willing to treat us as professionals. We would like a leader who asks for and respects our opinions. When Dr. Dingle makes decisions on his own, they are often not good ones; when he asks for input he often ignores it; and when we do play a role in decision making, he throws us under the bus as soon as any problems arise.”

According to Dingle, while schools do need to be run as a team, the principal still needs to be very clearly established as the leader.

“When I got to Chapel Hill, there had been a history of principal turnover,” said Dingle. “There had been five principals in 11 years. When there’s not consistent and stable leadership, someone has to provide that leadership. The teachers of Chapel Hill were the leaders. When I came on board, I was establishing a new leadership and a new vision for the school. And in some cases, once you are in a position of power, it can be hard to let that go. That was a part of our struggle, to get them to understand that with me there is leadership and stability. I learned that you have to set the vision, that you’re going to ensure collaboration. The principal is the leader of that building, and as principal you make those final decisions.”

Dingle’s three years at Handley High School went more smoothly. Dingle worked with a team of eight teachers over three months to develop a program that would help educate students on the increasing diversity of their school. On Feb. 15, 2015, Handley hosted a day of “cross-cultural” activities. One activity had students work with different amounts of art supplies to design a poster, illustrating that students could be creative despite limited resources. Another, “Step Up, Step Back”, asked students a series of questions about race, such as “I attend a school where most of the teachers are the same skin color as me” or “I can get Band-aids marked as skin colored that reflects my skin tone.” If students answered yes, they stepped forward. If no, stepped back. Dingle says the objective was to show students, and teachers, the diversity of the student population.

Dingle acknowledged that the program had a mixed reception from parents at the school.

“Here in Winchester, there has not been a lot of talk about racial diversity or cultural competency, it’s not really a conversation,” said Dingle. “We told students and teachers that this could be an uncomfortable conversation, and for some parents and staff it was. Some parents were uncomfortable, but I would do it again. Those are the kinds of conversations we need to have as a country and as a school.”

At Handley, Dingle also implemented a program called “Judges Hour,” where twice a week, students were given a 45-minute window during the school day to receive personalized instructional time. The program required three minutes to be taken away from each instructional block throughout the week, but Dingle said he believes the program was worth the adjustment.

Maxey, who recently moved to Clarksburg, Md., was hesitant to leave too much parting advice for Dingle.

“It’s important to approach the school with a fresh set of eyes,” said Maxey. “We faced a lot of issues five years ago, and after a while you get used to things and accept them.”

Maxey has met with Dingle and said she believes the two of them have a lot in common. They’re not overly fond of educational jargon and most of Dingle’s ambitions for the school are extensions of work Maxey has started.

“We’re not making radical changes, but improving on what’s already in place,” said Dingle. “There are a lot of resources in T.C.; a lot of academic and local support, and we can use that to help students be successful.”

Maxey did leave some advice for the local community.

“Embrace and support him,” said Maxey. “Give him a chance and give him constructive feedback.”

One of the few pieces of advice Maxey would leave for Dingle was to listen to the local community and not to be too stubborn.

Maxey said she was nervous about leaving the school, but also said that she was beginning to feel that she didn’t bring the same high levels of energy to the halls that she did five years ago. While she said she was initially afraid that a new principal could easily undo the T.C. William’s progress over the last five years, after meeting with Dingle, Maxey believes the school is going to be in good hands.