Eighth graders take “You Be the Chemist” and Odyssey of the Mind challenges. 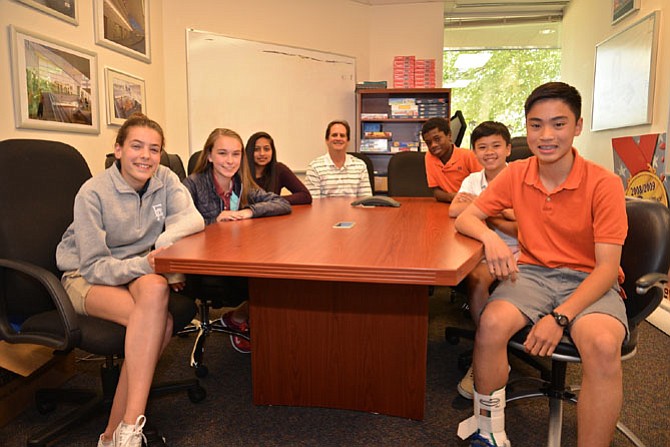 From left -- Bryce Nabulsi, Anika Schipma, Ilina Gobburu, coach Marwan Nabulsi, Chris Huynh, Maxwell Jones and Chris Nguyen took time out of their busy schedules and their preparations to talk about their experiences as the Nysmith School’s “Know Brainer” Team, readying for the “Odyssey of the Mind” World title. The team will compete against teams from all over the U.S. as well as 25 other countries. Photo by Andrea Worker.

Shaan Bhandarkar of Potomac Falls is an eighth grader at The Nysmith School in Herndon. A member of the school’s “MathCounts” team and a winner of the school’s annual Science Fair, Shaan turned his academic attention to the individual “You Be the Chemist” competition, going all the way to the State Challenge this year. “It was a great experience,” said Shaan. “I had never focused on chemistry like this before, so I learned a lot.”

The school year is coming to a close – but that doesn’t mean there isn’t time for the students at the Nysmith School in Herndon to squeeze in a few more competitions and maybe a trophy or two before that last bell rings.

Eighth grader Shaan Bhandarkar did his school proud recently, being one of only four students from Fairfax County to reach the “You Be the Chemist” State Challenge in Suffolk, Va. Presented by the Chemical Educational Foundation, the competition is a national contest that encourages students in grades 5-8 to explore chemistry and STEM (Science, Technology, Engineering and Math) concepts. The contest is in a quiz-bowl format, and the students take on the challenge as individuals, rather than in teams. Going at it alone didn’t seem to phase Bhandarkar as he made his way through the practice, school and regional rounds to the state event, answering the series of question with only 10 seconds allotted for each one.

Bhandarkar has participated in math competitions in the past, but this was his first foray into chemistry at a competitive level. “I am pretty passionate about chemistry,” he said. “This seemed like a really great opportunity to learn more and to go beyond the classroom and our regular curriculum.”

While Bhandarkar wishes he could have taken the state crown and advanced to the nationals (“I would have liked to have done that and gone even further for my school and all the people who supported me”), his reasons for entering the competition were more personal and long-term than the first prize title.

“This experience helped me prioritize my time and my learning methods. This is a step towards other things I can learn and accomplish,” Bhandarkar said.

While Bhandarkar was busy preparing to be regularly peppered with questions about chemistry, another group of Nysmith students were stretching their educational horizons as the school’s “Odyssey of the Mind” team.

“Odyssey of the Mind” is the largest international creative problem-solving competition, with some 800 teams, ranging from kindergarteners to college-aged students from around the U.S. and 25 other countries registered to compete in their age and geographic divisions. Maybe it’s experience talking (this group, with the exception of newest team member Chris Huynh, has been participating in the event for four years), but the Know Brainers didn’t show any signs of pre-finals jitters during an interview at the school.

“Sure, I get a little nervous about things I can’t control,” admitted team member Nabulsi, “but you get help from the whole team during the competition. They’re your backup, and we have learned to improvise when we need to.”

Anika Schipma agrees. “One time we had a problem with our presentation, but the rest of the team just fixed things as we went and I didn’t even know there had been a problem until afterwards.” It probably helps that the team actually does presentation “fire drills” to practice for potential pitfalls, or it could be that the team has chosen “Experiencing Technical Difficulties” as their problem to work and present.

Tasked with designing, building and demonstrating various devices, the team has to work within a theme where technical failures occur and must be resolved. The competition includes a “hands-on” piece, a verbal portion, and a combination of both, as well as a spontaneous segment. There is a list of tasks that must be included in the problem-solving endeavour, they are scored on how creatively they present their solutions, and there’s one more major twist – all of their creations must be powered by rubber bands! If that requirement wasn’t enough to make a few heads spin, when the students compete, their project paraphernalia must fit into no more than two boxes of specific measurements and must be constructed on site as part of the competition.

THE TEAM has worked their chosen problem throughout the school year and already presented their efforts at the regional and state events, “but it keeps changing,” said Maxwell Jones. “You take the feedback you get and go back and adapt your project to make it better and give your team a stronger chance at going all the way.” Making changes along the way doesn’t throw the members of the “Know Brainers” at this stage of their journey. The hardest part according to Schipma, with nods and lots of vocal agreement from all, was the brainstorming and decision-making sessions before everyone was agreed and the project could begin taking shape. The Nysmith gang agreed that this was a long, but effective process and came with its own benefits, like learning to listen, to compromise and to work as a team. “And even some carpentry skills,” laughed Ilina Gobburu.

With their graduation from the Nysmith School looming, these youngsters are focused and ready for their final competition, but admit that it will be difficult to say goodbye. “We’ve built such a great bond,” said Nabulsi, “with each other, with other school friends and our great teachers.” Congratulations to all of the Nysmith go-getters and good luck at the “Odyssey of the Mind” World Competition.