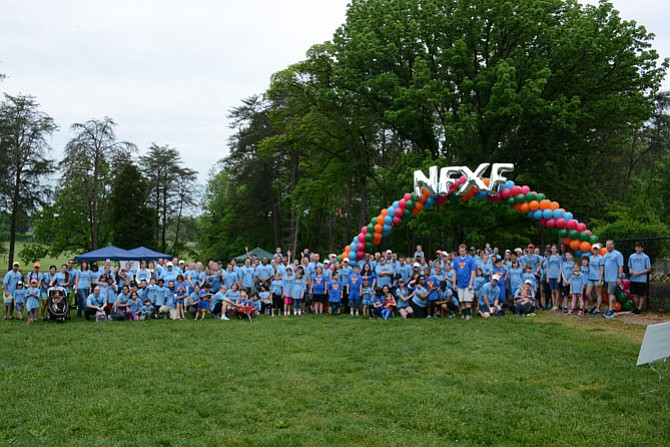 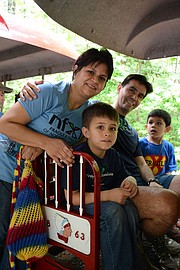 From left, Monica, Santiago, Diego and Nicolas Peña of Burke Centre prepare for a train ride after the Fragile X Walk through Burke Lake Park. “Nico” was diagnosed with Fragile X syndrome at birth.

Like many parents and children, one of Burke Centre resident Monica Peña’s biggest challenges with her son Nicolas is communication. Unlike most children, “Nico” was diagnosed with Fragile X Syndrome at birth. The inherited genetic mutation is a cause of mental impairment, ranging from moderate to severe learning disabilities, that can be linked to Autism Spectrum Disorder.

According to the Fragile X Families of Northern Virginia organization, the syndrome affects around 1 in every 3,600 males and 1 in every 4,000 to 6,000 females.

Peña and her husband Diego’s first son Santiago wasn’t affected, though she and her sister discovered they were both carriers of the genetic change in the “Fragile X gene.” That gene can be transferred to children, and with the right number of repetitions, manifest as the syndrome.

The Peñas weren’t expecting to get pregnant a second time. Monica said “Santiago was already a miracle child.” But along came Nico. Knowing chances were 50-50 he would have the syndrome, Monica had her umbilical cord blood tested at the birth. Nico had Fragile X.

“At a few weeks old, you think only of the worst,” said Monica.

ALMOST IMMEDIATELY, the family started early intervention with a therapist that taught them how to handle Nico. Children with Fragile X are often easily overstimulated by sensory input and have more difficulty learning to walk and pick up language.

Before Nico’s second birthday, the Peñas moved from Montana to Fairfax County. As part of the County’s Infant and Toddler Connection early intervention program, speech and occupational therapists visited and worked with Nico twice a month. Once he turned 2, he entered a special education preschool program at Little Run Elementary School in Fairfax.

Monica said the intimate class, geared towards autistic students, was instrumental in helping Nico pick up language. “Fairfax County was the place to be,” she said.

On Sunday, May 17, the Peñas participated in the third annual Fragile X Walk through Burke Lake Park. Organized by the Fragile X Families of Northern Virginia support group, the goal is to raise awareness for the syndrome, which can go undiagnosed or be misdiagnosed as autism, and raise money for research.

This year, more than 210 walkers from around northern Virginia joined the effort, raising over $51,000. A one-mile route took walkers around the frisbee golf course and concluded at the park’s railroad station and playground.

Fragile X Foundation Chief Operating Officer Tony Ferlanda attended the event. “It’s really an outstanding turnout, that demonstrates terrific leadership of the group and support from the Fragile X community,” he said. “This is like a family reunion, the bond these families have, whether they’re strangers or have known each other for years.”

ONE OF THE GOALS of the Fragile X Families of Northern Virginia group is to offer a support structure and information for anyone affected. 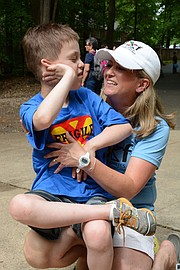 Jimmo and Buffy Grande of Fairfax Station listen to fun folksy music after the third annual Fragile X Walk. Jimmo was diagnosed with Fragile X syndrome at eight months old. Buffy was one of the co-organizers of the event to raise money for research and awareness of Fragile X.

Grande’s wife Buffy was one of the event’s organizers. Their son Jimmo was diagnosed with Fragile X at 8 months old. Being on the more severe end of the spectrum, he is nonverbal and suffers from seizures.

Jimi said one of the more recent local victories has been the opening of a dedicated Children’s National Fragile X Clinic in Washington, D.C. “So many times pediatricians don’t understand what kids need,” Jimi said.

And though each child’s case is different, many are trying some combination of private therapy, special education in school, medication and clinical trials.

The Peñas at one time enrolled Nico in medicinal trials through the University of California-Davis Medical Investigation of Neurological Disorders Institute. Now 5 years old, he takes medication to help moderate his sensory perception and allow him to sleep better.

And though therapists encouraged the family to focus on just teaching Nico English, Monica’s mother insisted on adding some Spanish.

Monica said one day recently she was saying something to her husband in that tongue when Nico started repeating what she had said.

“It blew my mind that he was learning Spanish,” she said, “that he understood the difference from English.”

In his case, Monica believes the combination seems to be helping. “Now we have more hope,” she said. “I’m fully confident he’s going to be self-sufficient. I saw him make a Nutella sandwich before Santiago did.”