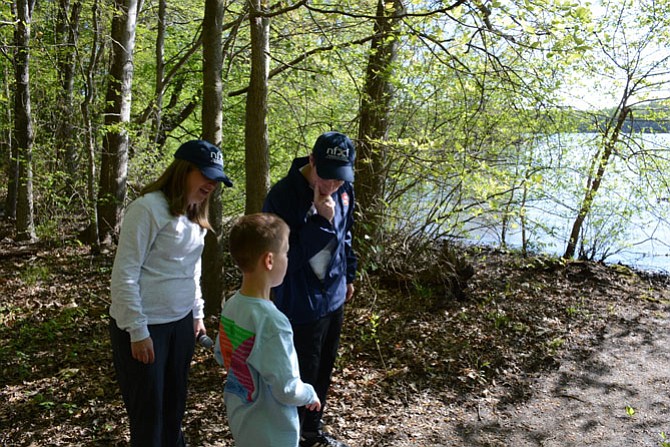 From left, walk organizer Buffy, Jimmo and Jimi Grande of Fairfax Station pause a moment during the 2016 Northern Virginia Fragile X Family Fun Walk at Burke Lake Park for Jimo to toss a stick towards the lake. Photo by Tim Peterson.

Back row, from left, Taylor, Andrea, Jeffery, Bill, (bottom from left) Ava and Samantha Creighton of Oak Hill enjoy some family time among other families who also have children with the Fragile X mutation. 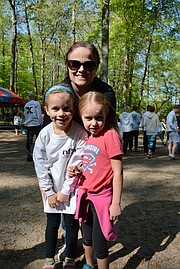 From left, Brooke, Elyssa and Tatum Pinkard of Springfield are friends and supporters of the Grande family of Fairfax Station that organized the 2016 Northern Virginia Fragile X Family Fun Walk at Burke Lake Park.

Jimi Grande of Fairfax Station may never get to teach his ten-year-old son Jimmo to throw a baseball. Jimmo was born with effects from an inherited genetic mutation called Fragile X that can cause moderate to severe mental impairment and learning disabilities, and is linked to autism spectrum disorder.

Instead, Jimi and his wife Buffy have become involved with the Northern Virginia Fragile X Families organization, supporting other parents and families with children like Jimmo and helping connect them with resources.

“It’s motivating when you have a child that’s impacted by it,” Jimi said during a mile-long Fragile X families fun walk at Burke Lake Park on April 24. The $55,000 raised by the walk will help fund a new national molecular bank of blood samples from individuals with the Fragile X mutation syndrome.

With more readily available samples from these individuals, it will hopefully encourage researchers to conduct more experiments in search of a cure.

AS A FATHER, Jimi said, “This is something I can do and feel good about.”

Jimi’s wife Buffy who organized this walk, the fourth annual Fragile X walk in Northern Virginia, described the experience many families with children with the mutation have gone through as “a stage process.”

Up to this walk, the Northern Virginia Fragile X Family group has raised more than $130,000 in support of the National Fragile X Foundation and establishing a specialized clinic in Washington, D.C.

Last year’s money raised from the walk helped establish the national molecular bank. No such bank existed before, and lack of access to samples from people with Fragile X was a deterrent to researchers, Jimi said. “We wanted to shake the scientists.”

In addition to raising money, a major component of the annual walk at Burke Lake Park is a celebration for families at the end of the walk in the park’s playground and train station area. Princesses from Disney’s “Frozen,” Elmo from “Sesame Street” and Spider-Man walked around and took pictures with children while others went on train rides, had their faces painted or received mermaid-shaped balloons with surprising anatomical detail.

“It’s nice for families to come and be themselves,” said Andrea Creighton of Oak Hill. Three of her four children live with effects from the Fragile X mutation, including her 17-year-old son Jeffery who is more on the social and interactive end of the spectrum and manager of the Chantilly High School varsity football team. Normally out in public, she said, “There’s an awareness, you always have to adapt: Crowds can be overstimulating.”

But with more than 200 people who understand the spectrum of effects Fragile X can have, from loud outbursts to just impatient shirt-tugging, the post-walk celebration is a safe environment, the National Fragile X Foundation Mid-Atlantic Region Leader Joe Garera said.

“You just don’t worry about it,” Garera said. “Someone has a meltdown, you give them space.”

Garera also praised the “great model” the Grandes and the Northern Virginia Fragile X families have established with their walk and celebration for bringing families together.

“Their tagline is ‘You’re not alone,’” he said. “That’s really what families feel like when they’re leaving here.”

FAMILY AND SUPPORTERS of Kevin Troutman, a senior at Herndon High School, learned about the walk on Facebook and show up en masse for their first walk.

“I’m happy to have people support me,” Kevin said. “I liked the walk, it was interesting and fun.” Kevin benefits from Herndon’s special education program and work transition program, which helped him to become a volunteer at Falcon’s Landing Military Retirement Community in Sterling and the Herndon Library.

Kevin’s father Jim said, “It’s refreshing to see this number out here and the things they do for the kids.”

Neither of Eylssa Pinkard’s daughters have Fragile X, but the Springfield residents came to support their friends the Grandes and the other families.

“It’s great for our girls to learn to support Jimmo their friend,” Pinkard said, “and to serve others in the community, to think outside themselves.”