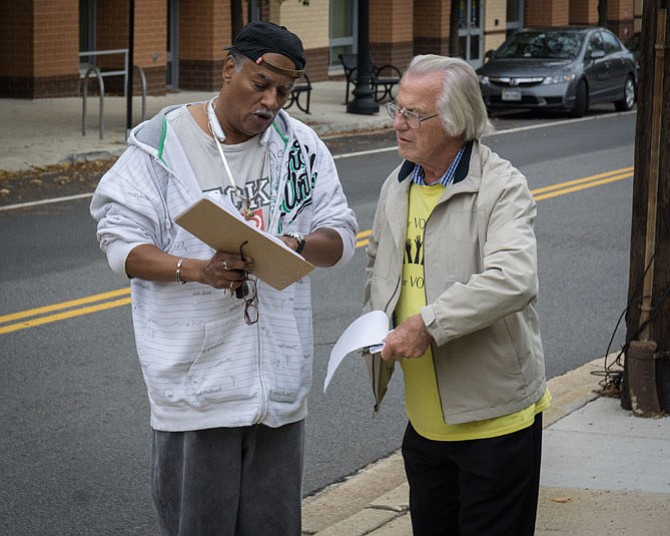 John Veldhuis of NOVA Catholic Community and Derrick Hawkins of Macedonia Baptist Church on their walk through the Nauck neighborhood to encourage voters to turnout Nov. 3.

From left, back, are the Rev. James Gibson, Imam Johari Abdul-Malik, and the Rev. Linda Olson Peebles. The Rev. Dr. James E. Victor Jr. Is in front, praying.

More than 40 volunteers in bright yellow shirts saying “Your Voice is Your Vote” flooded two particularly low-voting precincts on Sunday, Nov. 1 to encourage voters to turnout on Election Day.

VOICE (Virginians Organized for Interfaith Community Engagement) leaders estimated, as of 9 a.m. Tuesday, Nov. 3, a total of almost 600 commitments to vote from residents in Precincts 30 (Glebe) and 43 (Arlington Mill). If only one-third of those voters go to the polls, the organization would have contributed to a more than 20 percent increase in voter turnout for those precincts compared to the 2011 election when the same offices were on the ballot.

The non-partisan voter turnout drive by VOICE enlisted more than 100 volunteers to knock on doors, pass out flyers at bus stops, and make phone calls to registered voters in these communities Nov. 1-3.

At the kickoff at Lomax A.M.E. Zion Church, clergy representing Christian, Muslim, and Unitarian faith congregations sent volunteers off with prayers that made the moral case for civic engagement in elections.

The Rev. Linda Olson Peebles of the Unitarian Universalist Church of Arlington described the effort as “neighbors reaching out to neighbors,” while the Rev. James Gibson of Macedonia Baptist Church emphasized that, “We can have some influence on what happens in our county.” Imam Johari Abdul-Malik of the Dar Al-Hijrah Islamic Center stressed the need to build power through exercising the right to vote in order to achieve justice for “those who have been locked out of opportunity.”