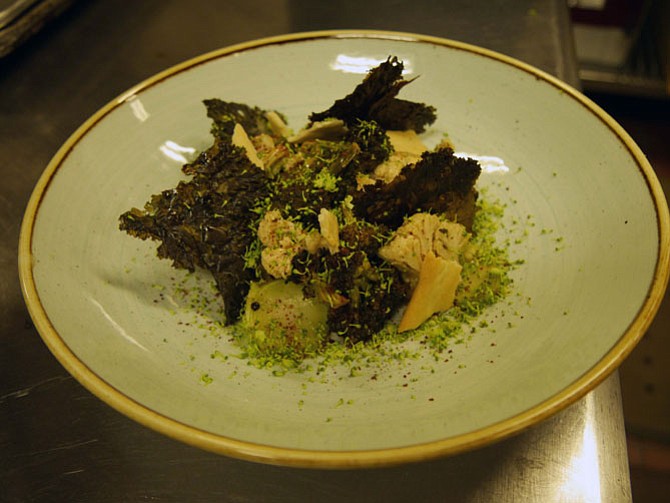 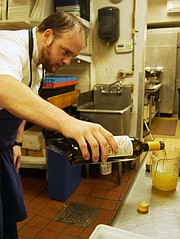 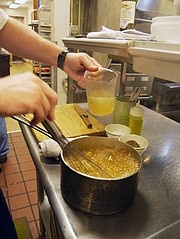 Keith Cabot points out that when you add the cold liquid to the hot caramelized butter, it foams bubbles to the top of the saucepan.

Vegetables are used “root to stems” so Keith Cabot shaves off small broccoli florets to use as garnish on the Brassica salad. 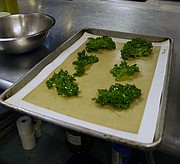 “Nice curly kale” from Northern Neck produce will be baked with olive oil, salt and pepper, until crispy as a topping for the salad.

"Smell the nutty aroma of the brown butter." Foam quickly bubbles up the sides of the saucepan as Keith Cabot, executive chef at Evening Star Cafe on Mount Vernon, adds the cold liquid to the caramelized hot butter cooked on high heat. He is making the brown butter verjus dressing for his Brassica Salad, a customer favorite. Verjus is a tart vinegar substitute made from unripened wine grapes. But he says it is important to have the rest of the dressing ready to go before the butter is browned so you can mix them together while the butter is still hot. He has measured one and a half cups of verjus and added juice from half a lemon to brighten up the acidity. Then two cloves of garlic grated with a zester. “I like to use this small thermos to pour the dressing because it's easier in a large kitchen," he said.

Today's salad features vegetables from the Brassica family including cauliflower, broccoli and kale. Six curly green kale leaves from Northern Neck Produce are spread on a half sheet pan. Cabot places another pan on top to add pressure. In addition to buying fresh produce directly from the farm, Cabot says the restaurant has a huge garden on the roof with mostly sage and other garnishes at this time of the year. The broccoli and cauliflower florets have been roasted in the oven with olive oil, salt and pepper and garlic at 375 degrees for 15-20 minutes. "I like to take the traditional salad and do something a little different," he said.

Green and white are mixed together in the bowl as the cauliflower and broccoli are coated with dressing. Cabot has shaved tiny green specks off the broccoli floret and will use what he calls his "green couscous" as a garnish. "I also shave thin round slices from the broccoli stalk to mix into the salad. Like with animals, the same with vegetables. We use it all from root to stem," he said.

The Brassica mixture is placed in a large serving bowl. Cabot sprinkles copper-colored sumac to add more bright acidity, then his broccoli couscous, making a green decorative edge around the dish. Pieces of lavash crackers that are made in the restaurant (a complicated process) are added to the top of the salad and finally several crispy kale chips are arranged on the top.

Cabot went to chef's school in Charlotte. Then he opened with a few restaurants in Washington D.C. including Suna on Capitol Hill where he was a sous chef, then Sodo on 14th Street and a restaurant in Chinatown. He says the major change he has seen in 15 years of cooking is that, "we know where our food is coming from. We have a relationship with food that my parents didn't have."

Cabot has been executive chef at Evening Star Cafe since Aug. 10 and during that time has changed the whole menu: "I wanted it to be more user friendly so guests can create their own experience." The previous version of Evening Star Cafe was Southern-themed but Cabot wanted to access all of the flavor profiles, and he wanted the focus to be an exchange between people. The first courses are all Share Dishes so that guests can taste a lot of flavors of the season.

He walks into the adjoining room past a rack packed with quiche crusts waiting for Sunday brunch. Part of this job, he explains, involves organization and thinking ahead to what you will need tomorrow or in a few days.

Cabot opens up the foil on a large, rectangular black pot to show his own favorite dish, the Braised Short Ribs that are cooked in a water bath at low temperature for 7 1/2 hours. Each is encased in a sealed plastic bag that removes all oxygen and keeps in the moisture and flavor during the cooking process.

When Cabot was growing up, his mother had retired from the Marines and his father from the Navy. They were both working on Master's degrees ”so food wasn't a focus." But he remembers holidays were a big thing where his godmother would cook a huge feast: "The story goes that I walked in one holiday and said, Mom, this is what a real kitchen smells like."