A conversation extends beyond the pulpit. 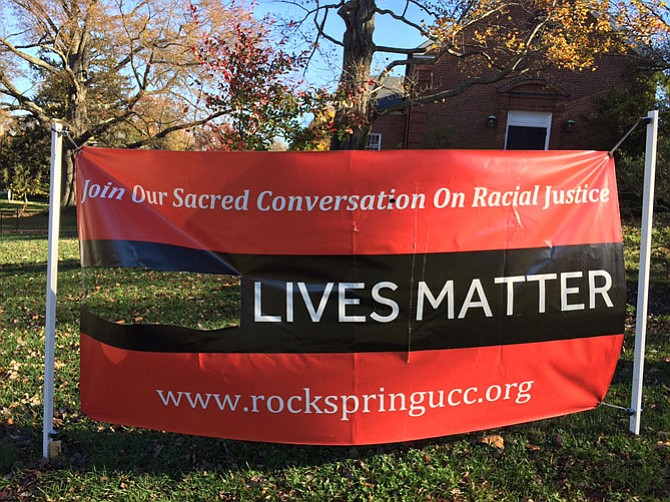 The “Black Lives Matter” banner was vandalized sometime the night of Sept. 10 at Rock Spring Congregational UCC on Little Falls Road. It had been installed in September as part of a year-long conversation on racial justice. Photo by Shirley Ruhe/The Connection

The Rev. Kathryn Dwyer, senior pastor at Rock Spring Congregational UCC, stands with her dog Micah beside the empty poles where the “Black Lives Matter” banner had been installed. She said she has ordered a replacement and intends to put it up to continue the conversation about racial justice.

Tuesday night after a church meeting the Rev. Kathryn Dwyer, senior pastor of Rock Spring Congregational UCC, walked her dog Micah right past the “Black Lives Matter” banner on the corner of the church lawn. Wednesday morning as she was taking the dog out at 8 a.m. she saw the word “Black” was missing from the banner, leaving only “Lives Matter.”

The banner had been installed in September right after Dwyer had started a sermon series on the Old Testament book of Esther relating power, privilege and prejudice at that time and looking through today’s lens with the oppression of people of color. The banner had been vandalized once before with cigarette burns and some shredding shortly after it had been installed. But, she says “we left it up.” The second time the word “Black” was completely cut out of the banner.

This banner is part of a year-long effort at Rock Spring to hold sacred conversations focusing on racial justice. The Social Action Board of the church had recommended to Church Council that that the church make public witnesses in solidarity with people of color being oppressed because of so much media attention about racial tensions. So far there have been three sermons, three conversations and a panel discussion. There will be one to two different events held each month for a year.

“The conversations have tapped deep emotions. I have been surprised at the intensity,” Dwyer said. “It feels challenging and vulnerable because it is so full of emotion, it feels rich and important, not just intellectual.“

Dwyer says she had dozens of emails from members of the congregation. One was from a Yorktown High School student, Elizabeth Woolford, who wrote, “I have never been more proud to be a member of Rock Spring. Rock Spring’s discussions on our stand on racial justice are reaching far beyond our church community. For these people, it is a sign (literally) that there are parts of the Arlington community that are working towards a better, just filled, and equal future, and prompting thought-filled discussions amongst the future voters and politicians in the high school community.”

Woolford says a social media conversation started on Snap Chat at Yorktown about what happened. Her friend saw it, posted it and said “Thank you for proving our point.”

Woolford said, “This one has a high following on social media.” She added most high school students think churches are very close-minded on things like this and LBGT. “This is sort of a sensitive topic, so social media gives you the option to put a topic out there.”

One of the responders said, “I hope they put a bigger banner out there.”

Similar signs have been vandalized in churches in Silver Spring and on River Road in Bethesda, so Dwyer thought it could happen at Rock Spring. But Dwyer said, “I have ordered a new banner, and we will put it back up.” She hopes to continue the conversation. “The violence and response confirm how important this issue is. The banner has struck a chord.”

On Saturday morning she had written an open letter hoping to reach the person who altered the sign inviting the person into the conversation at the church. The letter said in part, “Altering the sign we placed on our lawn by deliberately cutting out the word ‘Black’ from the phrase ‘Black Lives Matter’ was a passionate expression. I can make assumptions about what you might have meant by this. However, I can only speculate. This open letter is an invitation for you to join our sacred conversation.” Dwyer reported the incident to the Arlington police who came to investigate and although sympathetic declared it unsolvable.

For questions or comments or contributions to replace the $229 banner, email Kathy@rockspringucc.org.