Pajamas, Such a Simple Thing
Votes

Pajamas, Such a Simple Thing 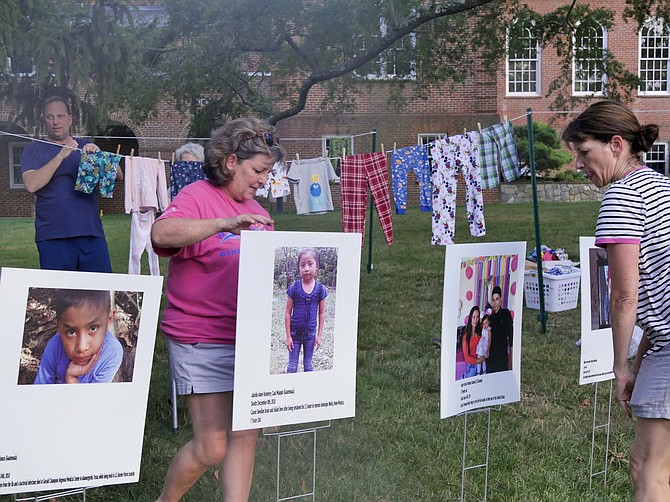 Rev. Kathy Dwyer installs the photo poster of Jakelin Amez Rosmery from Guatemala who died Dec. 8 where she was detained at Antelope Wells, New Mexico. With her are Denise Sisson, coordinator of the project (right), and Jeff Hogarth (left). Photo by Shirley Ruhe.

A handful of Rock Spring United Church of Christ members gather on the church grounds on Thursday, Aug. 22 to set up an exhibit of pajamas and photos of the eight children who have died under U.S. Customs and Border Patrol custody.

Rev. Kathy Dwyer says, "Our church did this to spotlight the inhumane treatment of children and to bring a situation that is farther away closer to us."

Why pajamas? "Every child should be able to sleep in a bed and be tucked in, but they sleep in cages," Dwyer says." This exhibit was inspired by a pajama display on the National Mall led by Indivisible Montgomery County who passed along 100 pajamas to Rock Spring for their exhibit. Rock Spring chose to add photos of the children.

As Rev. Dwyer pounds the metal stands into the ground and inserts the posters of the children, the conversation turns to predictions of thunderstorms. Denise Sisson, in charge of the installation project, points out that the photos are plastic and should withstand the raindrops. But no one is sure.

In the meantime, Lucy Spencer, a decades-long member of the church, stands back and imagines the display from the street. They decide to rearrange the clotheslines for maximum impact, which means replacing the poles and reattaching the clothesline. Spencer says, "We're just playing with the idea. You don't get it right the first time."

They discuss it again. Should people be able to walk inside the pajama display to experience the feeling? Finally they decide that the men who had to keep uprooting the poles would be in charge of the decision about whether to reposition the poles once again.

The next issue was where to put the leaflets explaining the display as well as the large poster "All God's Children" with the quote from Matthew 25:40. "Whatever you do to the least of these, my brothers and sisters, you do it to me." The final decision was to wire the poster to a large tree on the church grounds. "No nails in this tree."

Finally holding clothespins in hands and teeth, they began attaching the 100 pajamas to the close line. Plaid flannel pants, pink Teddy bear, blue dinosaur pants, cartoon T-shirts hanging side by side, each representing a child without the common amenities of childhood.

One of the members of the congregation comments, "Remember what happened to our 'Black Lives Matter' banner? It's only a matter of time. It's inevitable. Someone will desecrate a child's photo or tear something down."

Rock Spring has been actively involved in immigration issues for several years since the congregation voted to have their work with immigrants and refugees be a primary focus of their mission work. According to Dwyer, they now work with Catholic Charities Immigration Services as well as Christ Church Alexandria, who work with refugees. In addition, they are a member of the Congregation Action Network where they accompany immigrants to court appointments, attend protests, work on advocacy and come as a witness/advocate for an ICE raid.

The display will be up for at least a week at Rock Spring UCC located at 5010 Little Falls Road.