More than 800 children in foster care in Virginia are ready and waiting to be adopted. 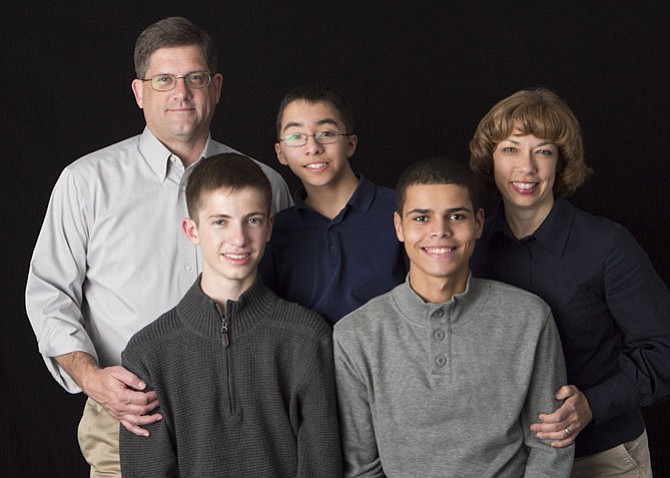 November is National Adoption Awareness Month. With that in mind, meet two families expanded through adoption; two families whose kids describe their family as "awesome."

The Hagens of Vienna are a family of two parents, Kelly and Scott; three boys, two adopted and one biological; and two family dogs.

Appreciative is the word that comes to mind listening to the Hagens talk about their family.

Lewis, 17, describes family priorities. “Somehow we find time to do stuff together. Like eating dinner. I’ve heard some families don’t do that. That’s very sad to me.”

Spencer, 16, talks of how his brother, James, influences his life. “I know there are a lot of experiences that I get to have because James is so outgoing.”

James, 11, appreciates time spent with his dad. “I like working outside with my dad. And, I like that he pays me for it.”

Lewis loves having brothers. “You have people who are always there. I play XBox with them. We talk. We listen to music. It’s like having friends that are always there AND they are family.” Would be different with sisters? Spencer says,“Well, they would probably make it all about them.”

For parents Kelly and Scott Hagen, appreciation extends outside of their immediate family.

“We have a lot of special issues in our family and that has made us more open minded about people,” says Kelly. “We make fewer assumptions and we listen more.”

The Connellys have an immediate family that includes two parents, five sons — two biological, two adopted from Fairfax County foster care, and one foster son — and two cats. They hope to add a therapy dog in the next few months.

Jackson, 8, likes the commotion that a large family brings. “I like having brothers. It’s interesting living with a lot of people. It’s very loud, which means I’m never bored and I learn a lot about how to be nice.”

Anthony, 17, has a deep appreciation for his parents, "Not every family would take in so many kids and do so much for them. My parents make sure to keep things fair and show us a lot of love."

Ben, 15, recognizes all that it means to be a family, "If you are looking for a family, you will find everything and more from the family right here. We are everything you would expect; the good and the bad. We are a real family."

What: 2015 Adoption Expo will educate, inspire and celebrate families formed through adoption. Prospective adoptive parents can meet adoption professionals as well as current adoptive and foster parents to learn about foster care adoption and foster parenting.

Hunter, also 15, might complain about the noise, and apparently does, all of the time, but he wouldn't change a thing, "When we are at home and I’m trying to get work done and everyone's doing their thing around my area, it drives me crazy. But I wouldn’t trade them in for peace and quiet.”

Scott and Megan Connelly have been foster parents to many kids over the years. According to Scott, the "spectacular" success of the foster children they have had over the years, many now grown, as well as the success of their biological and adopted boys is simple. “We make sure they know that we love them, unconditionally, and that we are going to hold them accountable. It takes a few weeks, but then they settle right in."

Megan adds: "One of the things that helps makes our household work is that the kids are flexible and giving. Each time we have added someone new into the mix, they follow the example set and pretty quickly, it’s like they were always there."

Nicholas, the Connelly's 10-year-old foster son describes his foster parents this way: "They are grateful. They are generous. They are awesome.”

Megan Connelly is one of 12 kids, 10 of whom were adopted. Megan says that with their current four, they are only just getting started.

If adoption is right for you, consider adopting a child from foster care. In Virginia, there are more than 860 children waiting and hoping to be adopted. Many of those children are listed on the Adopt US Kids website which you can find at: adoptuskids.org/states/va/index.aspx