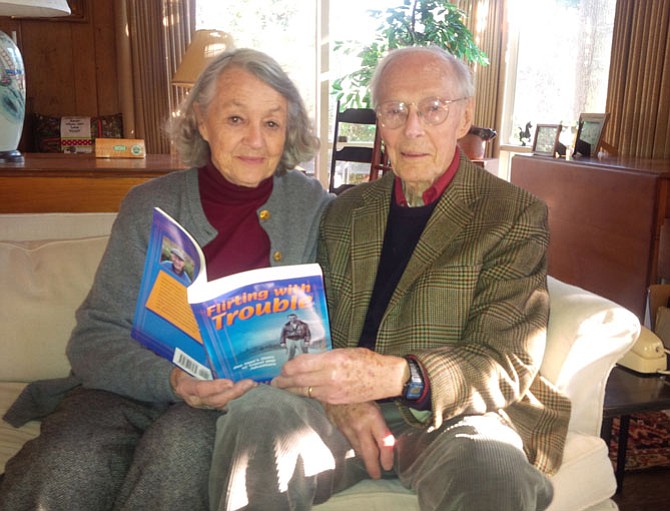 Robert and Stuart Wineland in the Hollins Hills home they have lived in since 1955. Photo by Jeanne Theismann.

“The war left me all the more convinced that I wanted to go into medicine and help people.” 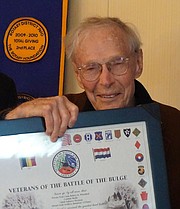 Dr. Robert Wineland, a WW II veteran of the Battle of the Bulge, died Sept. 20 at his home at the age of 91.

When 20-year-old U.S. Army Medic Robert Wineland arrived in the village of Laudersfeld, the wooded countryside of far eastern Belgium was relatively peaceful, a quiet buffer zone disrupted only by occasional artillery fire and brief skirmishes between opposing infantry patrols. But on Dec. 16, 1944, the sleepy Ardennes front was about to wake up. The Battle of the Bulge had begun.

“I was having a conversation with my captain and two young cooks outside a farmhouse when I realized I had forgotten my wool cap,” Wineland recalled on the 70th anniversary of the battle’s end earlier this year. “I darted inside to retrieve it and noticed a window was ajar. Just as I reached up to close it, a loud explosion shattered the glass and blew me backwards. I thought to myself, ‘Good going, Bob. Here it is, the first day of action and you got shot.’”

When he realized he was not injured, Wineland made his way back outside and saw something on an adjacent hilltop that stopped him dead in his tracks.

“I knew what it was immediately,” Wineland said. “A German King Tiger tank, one of the biggest tanks ever built and nearly twice the size of our Sherman tanks. It had fired an 88mm shell, blowing off the heads of those two young cooks.” 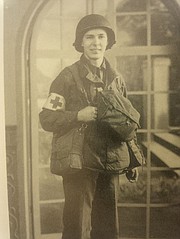 Army Medic Robert Wineland, in Belgium in late 1944, was part of the 106th Division during the Battle of the Bulge.

Despite the danger, Wineland crawled on the ground to tag the two casualties then, still on his belly, made his way to a nearby barn to hunker down. Under cover of darkness that night, he made his way through the Belgian countryside, at one point getting lost in the snow-covered Ardennes Forest for several days. Reunited with his comrades in Vielsalm just before Christmas, he remained on the front lines as the battle continued throughout January 1945.

“Germany’s surprise attack had thrown the Allies into disarray,” the Alexandria resident said. “In a single brief engagement, my 106th Division suffered more losses in casualties and captured than any other American division in World War II. We were annihilated.” 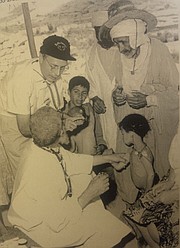 Wineland, who was discharged in December of 1945, had survived the largest battle fought by American forces during World War II. On Sept. 20, he died at his home in Alexandria. He was 91.

Born in Washington D.C. in 1924, Wineland returned home following the end of the war to continue his pre-med studies at George Washington University. He went on to complete his medical degree there in 1951, the same year he married Stuart de Murguiondo. Following residencies at the Children’s Hospital in Washington and University of Colorado Hospital in Denver, the two settled in Alexandria in 1955.

Practicing at Alexandria Hospital at the corner of Duke and Washington streets, Wineland served for years as the sole pediatrician between Alexandria and Richmond. When it was announced in 1959 that Alexandria Hospital would be relocated to the West End of the city, Wineland and a group of doctors began seeking support for the creation of a new hospital to be built in the Mount Vernon district.

Wineland’s efforts came to fruition on Oct. 26, 1976, when Mount Vernon Hospital opened its doors. The next day he was named the first president of the medical staff.

Throughout this time, Wineland also made medical mission trips to treat children in Algiers and Honduras as a volunteer with CARE-Medico and Catholic Relief Services.

Upon his retirement in 2000, Wineland served for seven years as a volunteer at the Carpenter’s Shelter medical clinic. In 2008, he was recognized by the City of Alexandria with the Flora Krause Casey Public Health Award.

Known to many as “Dr. Bob,” Wineland was an active member of the Alexandria Rotary Club for more than 25 years. At a recent club meeting, he reflected on his time in combat.

“I was very lucky to get out,” Wineland said. “As I look back, it was a profound learning experience. I saw the collapse of an empire and people reacting under every imaginable situation. The war left me all the more convinced that I wanted to go into medicine and help people.”

Wineland is survived by Stuart de Murguiondo Wineland, his wife of 64 years, four children and several grandchildren. A Celebration of Life service will be held Saturday, Oct, 10 at St. Paul’s Episcopal Church, 228 S. Pitt St., at 11 a.m. In lieu of flowers, donations may be made to the Alexandria Rotary Foundation, P.O. Box 32066, Alexandria, VA 22320.