‘We Made a Difference’
Votes

‘We Made a Difference’ 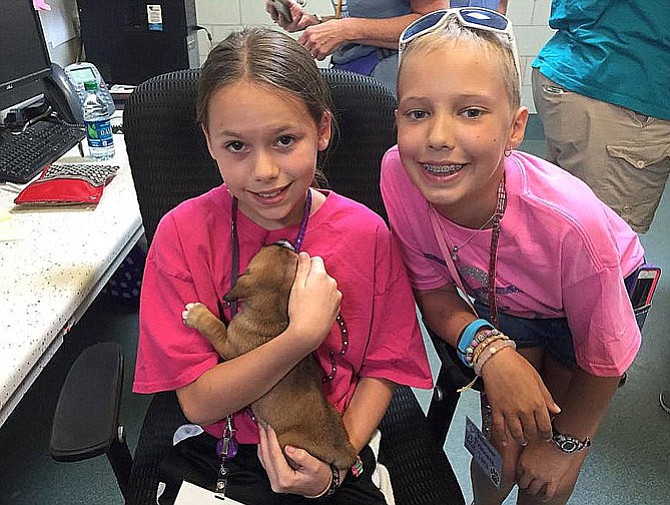 From left are Shelby Mysel and Tara Sankner with a puppy at the shelter. Photo Courtesy of Karen Mysel

Take two girls, add in compassion, determination and a love for animals, and the result is a successful fundraiser for the Fairfax County Animal Shelter.

The girls are Tara Sankner, a fifth-grader at Lees Corner Elementary, and Shelby Mysel, a sixth-grader at Providence Elementary. Good friends, they initially met at softball, where both pitch for The Galaxy in the Vienna Girls Softball League.

Tara, 10, is battling brain cancer, but that doesn’t stop her from thinking of others. In fact, the fundraiser was her idea.

“I’ve always wanted to help the animal shelter because I don’t like the way people leave dogs on the side of the road,” she said. “So I thought we should raise money to help the shelter.”

That way, said Shelby, 11, “They could buy medicine or anything else they needed. Tara decided to sell handmade potholders/coasters and I asked her if I could help.” Tara had a craft kit for them and, once she learned how to weave them, she taught Shelby.

The Animal Shelter’s thank-you cake for the girls.

Soon, they were busy making lots of 3-inch-square, cloth potholders in a variety of colors and patterns — stripes, squares and crosses. “We started working on them in June, when school let out,” said Tara. They made the potholders on their own and also together during sleepovers.

“It only takes a few minutes to make each one,” said Shelby. Eventually, they’d made nearly 150 and sold them for $3 apiece.

“We took orders, and my mom posted our project on my cancer page in Facebook and told people that she knew,” said Tara. Shelby’s mom brought fliers to work. Altogether, the girls raised $588. “Some people bought potholders and made a donation,” said Tara. “And some just made donations.”

Meanwhile, Tara’s mom, Tammy Sankner, contacted the animal shelter about the fundraiser. “They were happy we were doing it for them,” said Shelby. “And surprised, too,” added Tara.

Shelter employee Susan Kilcup then arranged for the girls to formally present their donation on Saturday, Aug. 22. “Some of our friends and family members were there, and the people at the animal shelter,” said Shelby.

In turn, the shelter had a cake for them, and Interim Director Barbara Hutcherson spoke during the ceremony. She also presented the girls with plaques with raised silhouettes of a dog and a cat on each one, plus their names and the words, “Humane Hero 2015.” 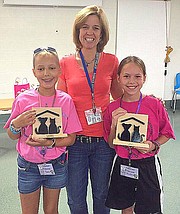 “The shelter went all out,” said Shelby’s mom, Karen Mysel. “I was very moved by it. And I thought what the girls did was great. Shelby’s always talking about becoming a vet, and I was proud of them both.”

When they visited the shelter, said Tara’s dad, Craig Sankner, “They got a guided tour of the place. And some friends of ours later adopted a puppy that was brought in while we were there.” He, too, was proud of the girls for their accomplishment and also for wanting to do it, in the first place. “They devised their plans, themselves, and asked help from Tammy and Karen when they needed it. And I got to drive them around for supplies.”

As for the girls, they were delighted with the reception at the shelter. “The tour was really cool,” said Shelby. And, said Tara, “We got to hold the newborn puppies.”

Most of all, though, said Shelby, “It made us feel proud because we knew our fundraiser was for a good cause.”

“And we made a difference and helped the animals,” added Tara.

Now both girls are immersed again in school. Tara, who says she’s currently “feeling good,” especially likes art and social studies. In her spare time, she likes to draw, play with her dog and play softball. Shelby’s favorite subjects are math and P.E.; she also likes playing softball and basketball and coloring.

But the pair haven’t forgotten about the animals at the shelter. “We’re already thinking about what we’ll do next year to help them,” said Shelby.

Grateful for their help, Hutcherson said, “It was really impressive that they were able to raise so much money; it was fabulous. The funds will go directly toward animal care — medical care or enrichment, such as harnesses, leashes and toys.”