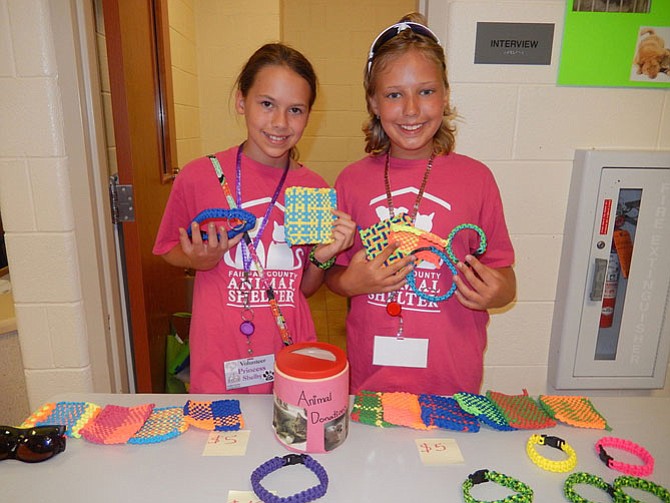 Tara Sankner and Shelby Mysel are two youths with big hearts and a love for animals. And for the second year in a row, they held a fundraiser for the Fairfax County Animal Shelter.

“I don’t like the way some people treat their dogs and cats badly and just abandon them,” said Tara. “But the shelter takes them in and takes care of them, so we wanted to raise money for it.”

“The shelter can use it to help get the food and medicine the animals need,” added Shelby. 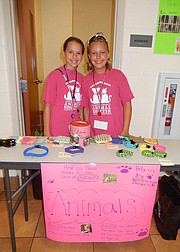 “We are very thrilled that these girls care so much about the animals that they’re willing to spend so much time making all the great things they’ve made and donating the proceeds to the shelter.”

Tara, 11, a rising sixth-grader at Lees Corner Elementary, and Shelby, 12, a rising seventh-grader at Lanier Middle School, sold items they made themselves. Using paracord, a type of nylon rope, they created brightly colored potholders, drink coasters, bracelets and animal collars.

Then on Saturday, Aug. 13, from 10 a.m.-2 p.m., they set up a table inside the shelter to offer their wares. And they picked a good day for it. Saturday was “Empty the Shelter Day,” when all the normal adoption fees were waived, so even more people than usual went there to adopt animals.

Last year, in a similar fundraiser, the girls raised $588 for the shelter. But this time, their goal was $800 — and they made it. Whenever there was a lull at their table, they walked around with a donation jar, seeking contributions from everyone there. By 1:15 p.m., they’d raised more than $700; and by the time they were done, their grand total was $809.25.

“I’m incredibly proud of them,” said Shelby’s mom, Karen Mysel. “It’s just awesome what they do, and I’m excited that they came up with other ideas about what they wanted to make. Last year was just potholders. And they’re already thinking about what they’ll make next year. They’ll even begin making everything earlier so they’ll have a bigger inventory.”

“We started working on them, the middle of summer,” said Shelby. “But we were both busy with other stuff, so we had to find the time.”

Not surprisingly, both girls have dogs of their own. Shelby has a 2-year-old Golden Retriever named Coco, and Tara has a 4-year-old Labrador/boxer mix named Caroline. And, said Tara, “Shelby’s dog is hilarious.”

“I like laying on the couch with her and playing fetch with her,” said Shelby. “We’ll throw a ball in the yard, and Coco will sometimes get excited while running, put her head down and fall over. She’s called a Golden Retriever, but she’s not that good at retrieving.”

As for Tara, she especially likes snuggling with her dog. “When Caroline lays down, she always wants me to pet her stomach. And when I stop, she pushes my arm down with her paw so I’ll pet her more. She’s also active around guests and happy to see them.”

For example, said Shelby, “When Tara and I have sleepovers, Caroline will come over and lick my face. And I’m like, ‘Really, Caroline, I’m trying to sleep.’”

So it was only natural, then, that the two friends held a fundraiser for the animal shelter. “I just think it’s touching that they want to give back to the shelter,” said Tara’s mom, Tammy Sankner. “And they’re selfless to want to do this during their summer break. This was their own idea that they carried over from last year to this year, making an even bigger fundraising goal this time.”

For their part, shelter personnel were delighted. “We are very thrilled that these girls care so much about the animals that they’re willing to spend so much time making all the great things they’ve made and donating the proceeds to the shelter,” said Cindy Sbrocco, the animal shelter’s volunteer coordinator. “They’re an inspiration for all the staff and volunteers.”