Candidates Face Off at the Grange in Great Falls
Votes

Candidates Face Off at the Grange in Great Falls 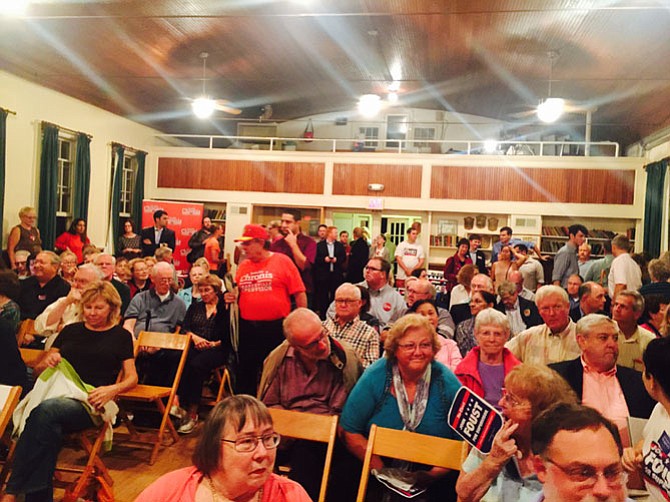 The crowd at the debate sponsored by the Great Falls Citizens Association last week at The Great Falls Grange. Photo by Ken Moore.

The Great Falls Citizens Association will host a debate for candidates running for election to the FCPS School Board and various county positions.

Election Day is Nov. 3, with early voting beginning Sept. 18. Great Falls residents wishing to submit questions for consideration by the GFCA Debate Committee for this second debate may send them to ralph.apton@gfca.org before Oct. 14.

Great Falls residents wishing to submit questions for consideration by the GFCA Debate Committee may send them to ralph.apton@gfca.org before Oct. 14.

Jennifer Chronis knows how to pack a house.

The hall seemed somewhat empty, despite five dozen who remained interested in the state senate race, as Chronis’ supporters made their exodus after her portion of the debate concluded. Chronis greeted her supporters triumphantly as they filtered through the Grange’s exit doors, The voices of Chronis supporters could still be heard when Sen. Barbara Favola tried to begin her introductory remarks.

“I’m not offended,” said Sen. Barbara Favola, the last candidate of the evening. “I know my race is not as interesting as the last ones,” referring to the Foust/Chronis debate and state Del. Kathleen Murphy’s debate against challenger Craig Parisot.

JOHN FOUST, Dranesville supervisor for the last eight years, has an opponent who believes she can replace him.

She has taken a leave of absence from her job at IBM to run her campaign, and says her campaign has knocked on more than 20,000 Dranesville district doors and visited 8,000 Great Falls houses.

“I’m running for Dranesville supervisor because I believe our district needs a stronger leader,” Chronis said. “Financially and economically we really are at a crossroads here in Fairfax County and my opponent has done little to solve what I believe are our most pressing problems.”

“The bottom line is, I have listened to you, I have identified with you on the issues that are important to you and I have taken a leadership role to make sure we’ve got the things done that you as a community deserve,” he said.

FOUST ASKED Great Falls residents to look around their neighborhood, and named a variety of community accomplishments.

“It’s great to be back in the Grange,” said Foust, who advocated for the funding to make the Grange ADA compliant this year, the first step GFCA asked him to take in making the Grange and Old Schoolhouse more accessible to local residents and programs.

“I’d like to go over the past eight years and what we’ve done for Great Falls, you and me, working together.”

“I spent the past eight years as supervisor listening to you, making efforts to help you improve your community, and delivering great results for you,” said Foust.

“I’d like to go over the past eight years and what we’ve done for Great Falls, you and me, working together.”

Foust started with the intersection of Route 7 and Georgetown Pike.

When he ran for office his first time, one voter told him about the possibility of a traffic light to be installed at Seneca Road, he said. “‘If you get that light, I’ll vote you forever,’” Foust recalled the voter telling him.

“And I got that light, so I have at least one vote,” said Foust.

“I’m sure many in this room remember the battles that were going on when I got elected. And the county would not listen. And I made them listen and as a result the community has a gorgeous fire house,” Foust said.

He talked about his passion for Riverbend Park and his success advocating each and every year for continued funding for the park.

“Riverbend Park, I love that park,” he said.

“Who can forget four years ago when I was running for reelection. The park authority had the brilliant idea of putting in a zip wire,” he said. “Well, I stopped that and there is no zip wire at Riverbend.”

He recalled a similar debate before his tenure as supervisor even began, when he was the challenger, when the traffic light at Riverbend was addressed.

“My opponent has done little to solve what I believe are our most pressing problems.” 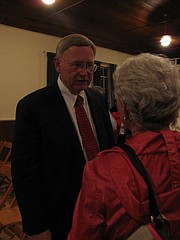 “I went to a political debate similar to what we have tonight and my opponent, everybody had her stickers on, and I was a rookie just running,” he said. Before that night was over, support was shifting away from the incumbent because she would not support a light at Riverbend, Foust said. “I said, ‘That’s crazy, we need a light at Riverbend for safety. We have 16 year olds get their driving licenses.”

Last Tuesday, Foust asked voters to consider the place they sat in for the evening’s debate, Great Falls Grange, and the vision he and community initiated for the community, as well as his overall vision for the county.

“I was told the community wants to take the initiative to make this a community center but before they could even begin the process, they needed it to be ADA accessible. I got that done, it is now ADA accessible,” he said.

“And eventually if the community groups come together the way I think they might and the way it was initially proposed, I see something more grand here with the Grange and the Schoolhouse as a community facility.”

“I distinguished myself as a civic leader who truly cares about his community and advocates effectively for all of us,” said Foust.

“My husband and I are proud residents of Great Falls. I’m a military veteran, I attended UVA on Army ROTC scholarship and spent 21 years serving our country, retiring as a Lieutenant colonel,” she said.

“In the Army, I learned how to lead, to set the example, to put the needs of others before my own, to make tough decisions and to get things done. During my Army career, I had as many as 150 soldiers under my command and managed budgets and contracts up to a hundred million dollars.

“I’m also a business leader,” she said. Chronis has worked for IBM for 14 years, most recently serving as Vice President, Department of Defense at IBM, a $650 million account, she said.

SHE LAUNCHED her campaign officially in February.

“We have knocked on nearly 20,000 doors and here are a few of the things I have heard specifically to Great Falls,” she said.

“We need to relieve traffic congestion but also protect Georgetown Pike as a scenic byway,” she said.

“We need to preserve the semi rural nature of Great Falls by making balanced land use decisions with Brooks Farm as the most current example.

“We need to resolve our school budget crisis and we need to make our county more businesses friendly to help our small businesses thrive,” she said. 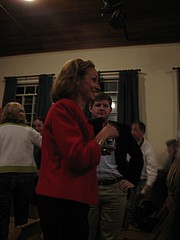 THE TWO CANDIDATES were asked questions pertaining to local issues, such as The Grange and The Old Schoolhouse and access to them for citizens and community organizations, and the resident curator program and implications for places such as Turner Farm.

Chronis maintained her composure in her response, but drew an unintended laugh in her closing remarks. In highlighting how active she has been in getting to know Dranesville voters, she suggested that Foust has not been. She said some households told her that Foust hasn’t been knocking on their doors like she has.

“I haven’t personally seen Foust at any of the community events I’ve been to,” she said.

Many in the audience laughed, including Foust, at that.

“Oh, come on,” said one voter near the front row.